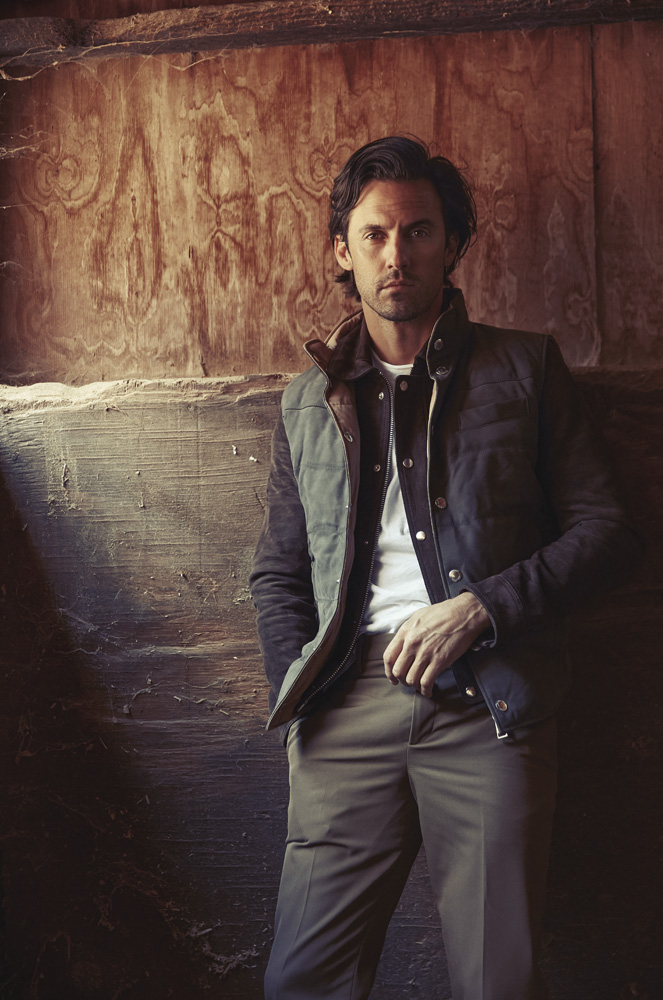 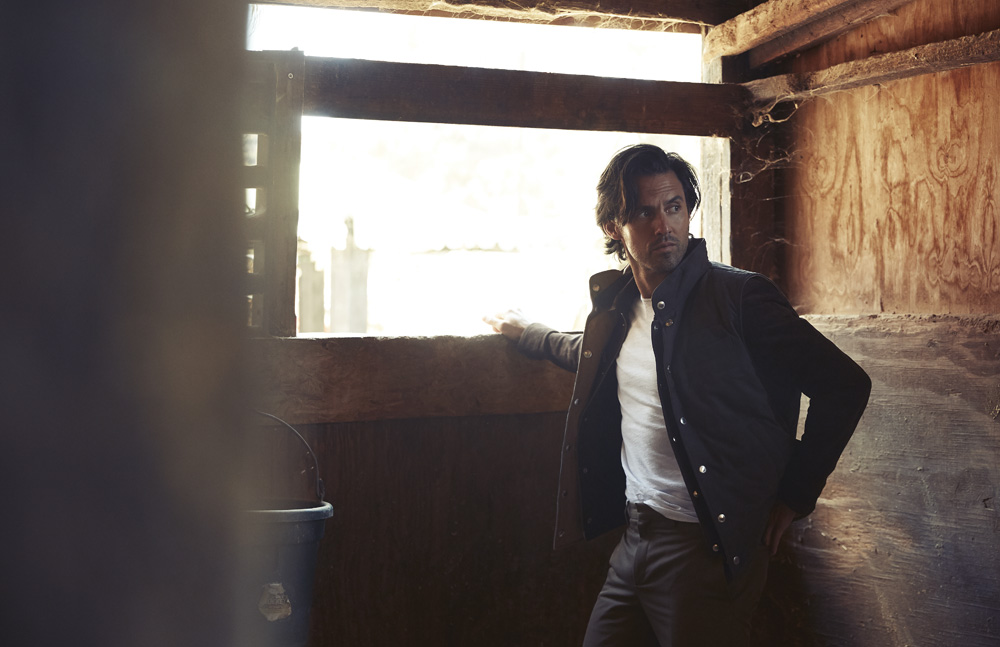 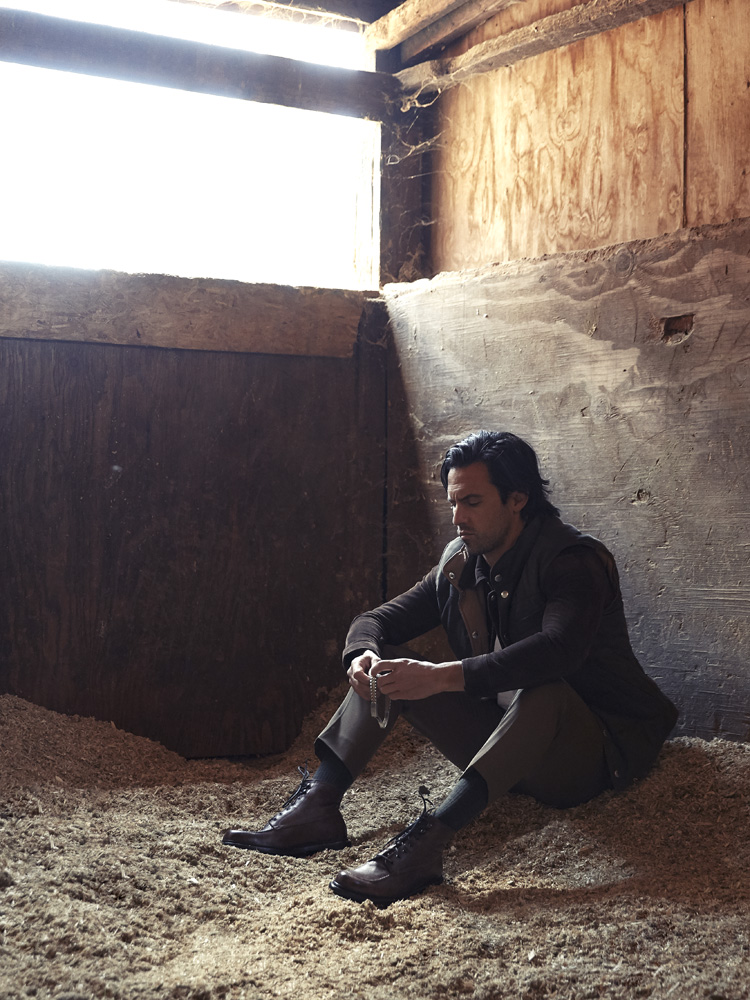 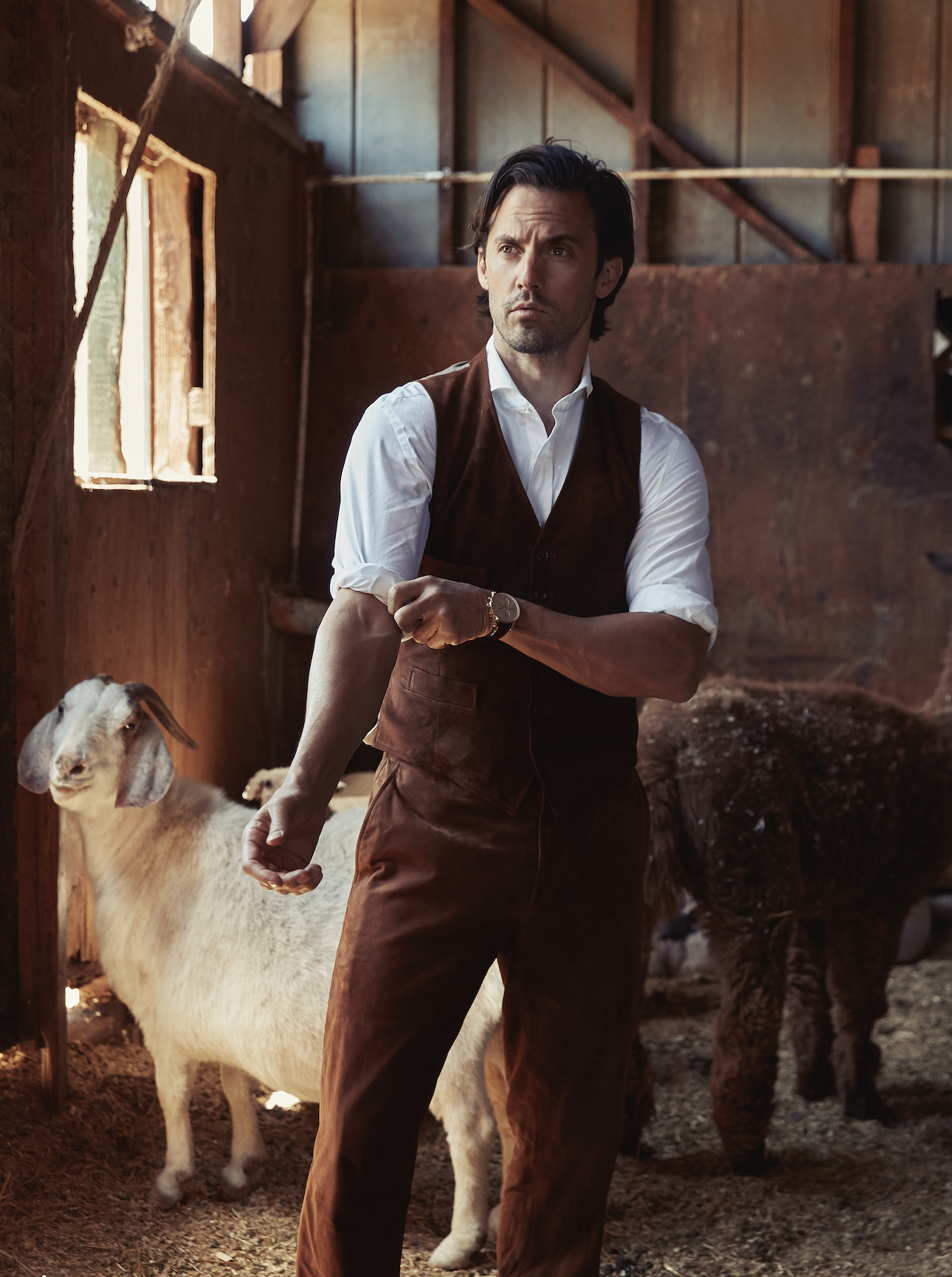 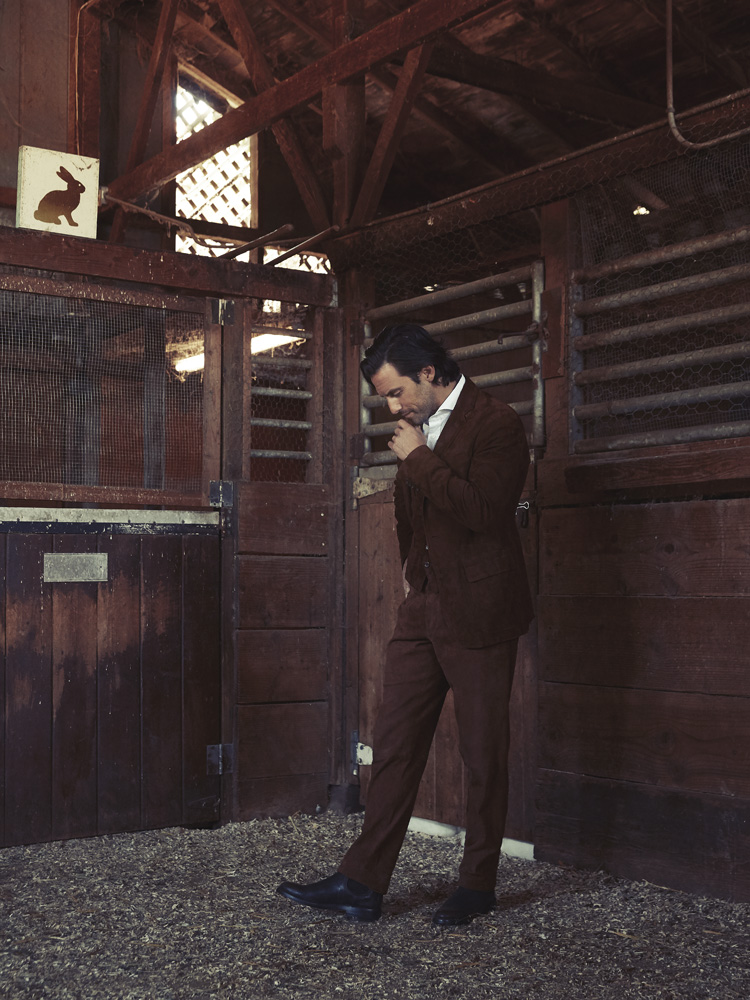 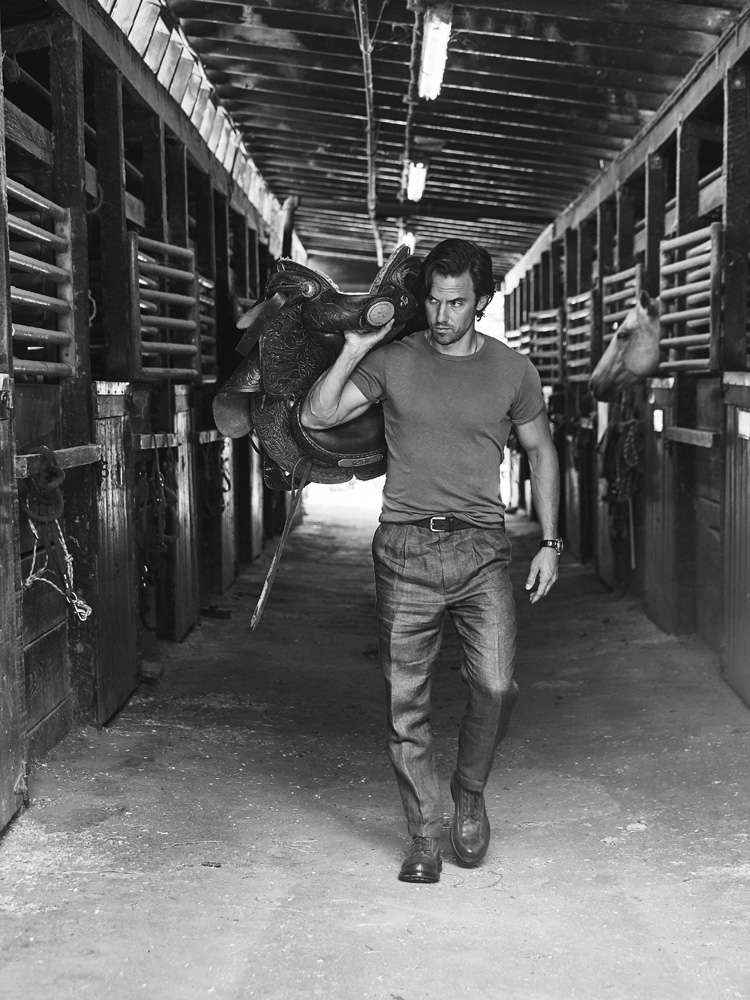 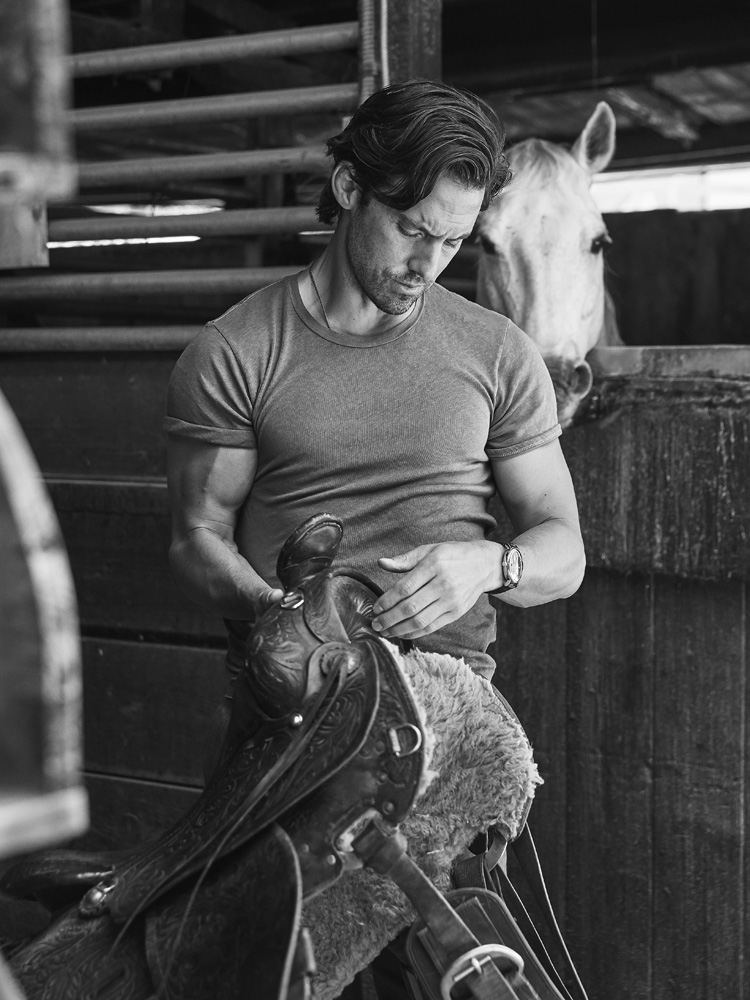 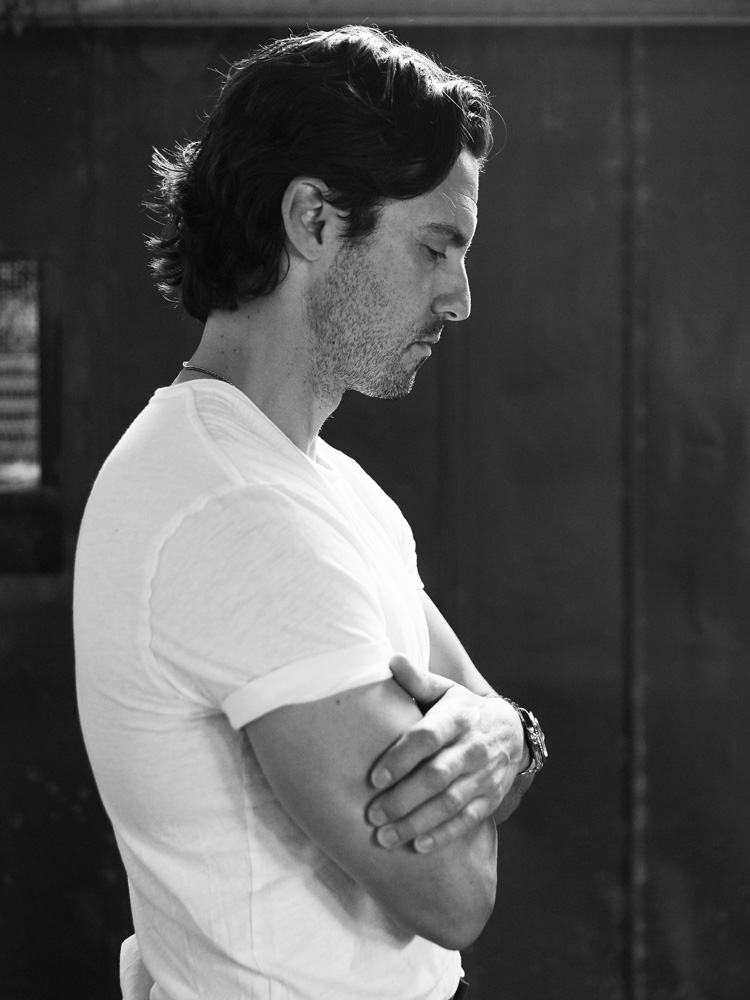 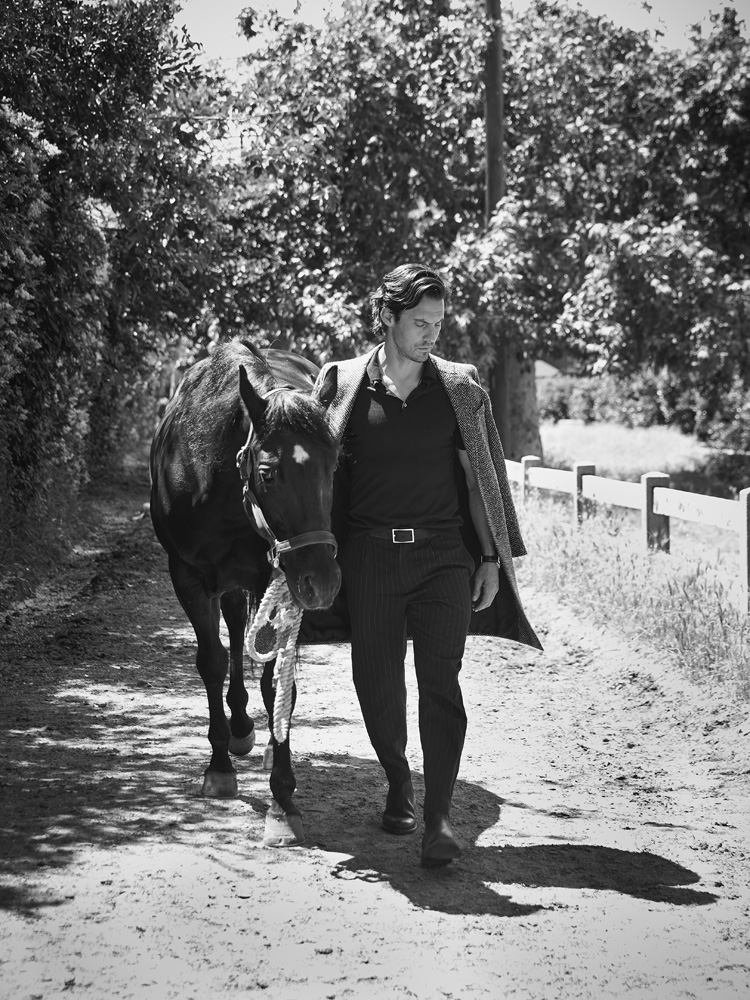 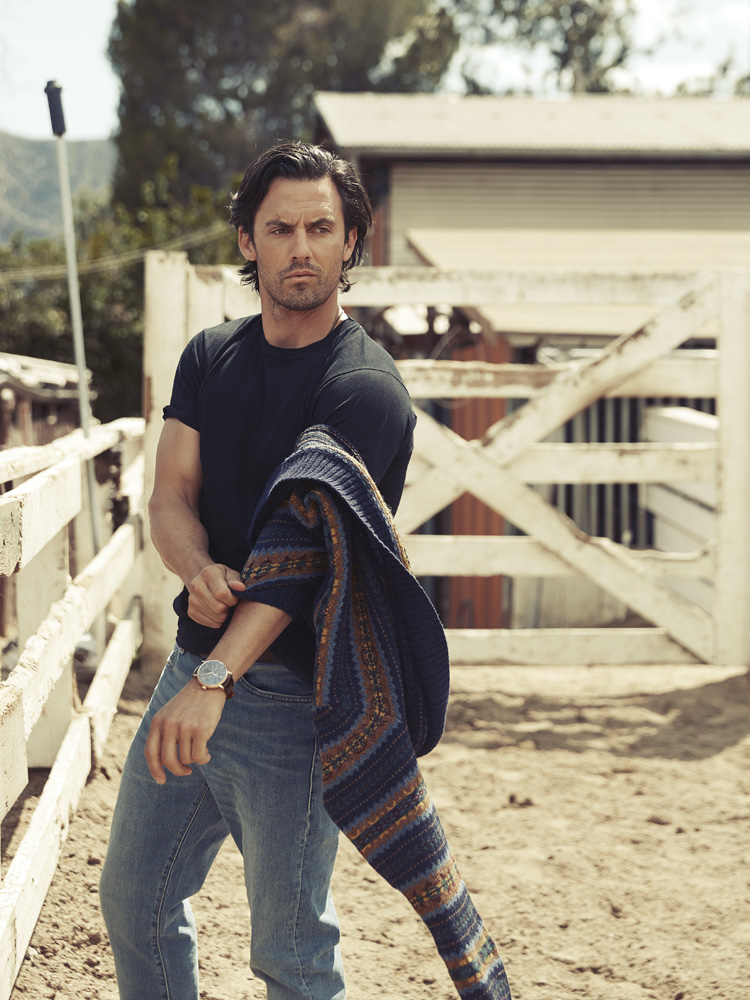 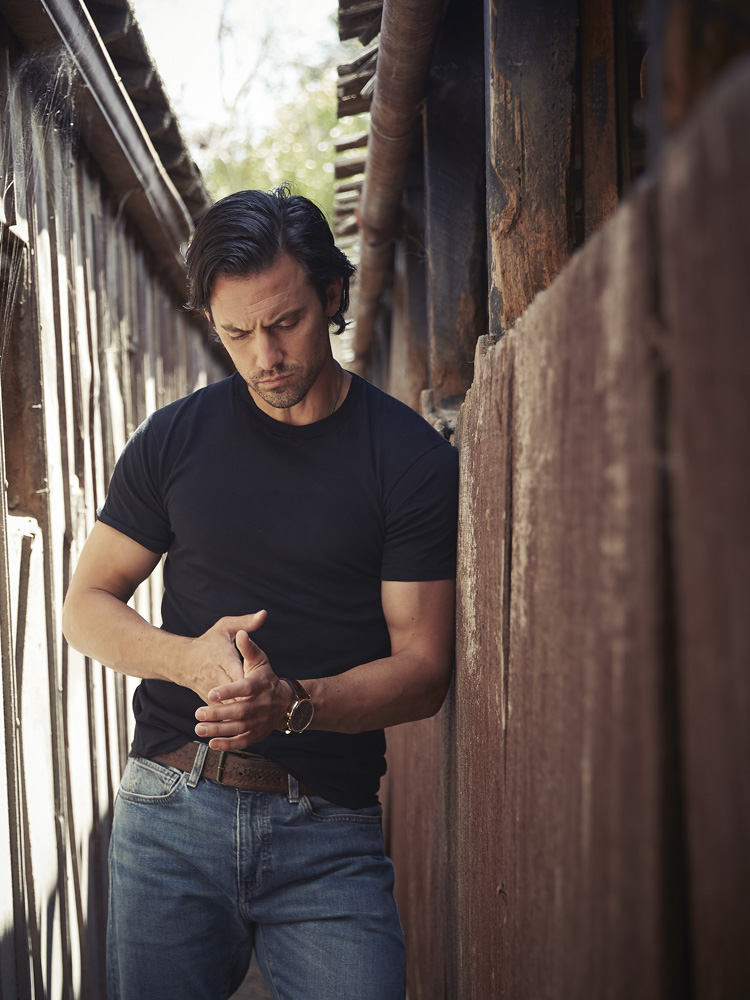 An uncanny ability to tug on viewers’ heartstrings as the flawed family patriarch Jack Pearson on NBC’s This is Us has earned actor Milo Ventimiglia three Emmy nominations, a Critic’s Choice Award and the adoration of TV viewers everywhere. While fans anxiously await the hit drama series’ fourth season this fall, Ventimiglia’s performance in the Fox 2000 feature film, The Art of Racing in the Rain (release date, Aug. 9), will still have them reaching for the tissues. An adaptation of the international bestselling novel by Garth Stein, the story follows the ups and downs in the life of aspiring Formula One racecar driver Denny Swift (played by Ventimiglia), his wife Eve (Amanda Seyfried) and daughter Zoe (Ryan Kiera Armstrong), as seen through the eyes of their golden retriever, Enzo (voiced by Kevin Costner). A patriot and humanitarian, Ventiglio visits military bases with the USO and is involved with the Iraq and Afghanistan Veterans of America, an organization that supports service members returning home from overseas.

What initially drew you to acting?

When I was a kid, I used to watch plays and things on TV, and I saw people laughing and I saw people crying. The idea of impacting people emotionally kind of stuck. When I was younger, I had a drama teacher who said I was good at it and other people said I could make a career out of it. Now, 24 years later, I still haven’t been kicked out of Hollywood.

What types of roles do you most like playing?

It varies. The older I get, the roles change. For me, it is about finding the truth in the men that I play, understanding what their wants are, what their lives are to be and trying to make their experiences as real as they can be, so the audience believes what the character is going through.

What can viewers expect from Season 4 of This is Us?

A lot of tears. That’s kind of what the show is. We dive deep into the human condition, commonality and family, and it’s emotional. But it’s emotion with hope, which is what I love about the show. It’s not just trying to force tears out of someone. It’s about getting someone to feel, to relate and to understand that life itself is beautiful and wonderful and difficult and challenging. But we’re all here, and we’re all in it. So hopefully we can all look out for one another.

In what ways are you similar to or different from your character, Jack Pearson?

I think we are both hopeful. I don’t have a drinking problem. We kind of look the same. The mustache was my idea, not his. And I think what I do love about Jack is that he’s deeply flawed, but he’s a good person who has, at times, done bad things. But he has this hopeful quality about him where he wants the best for those he loves. It gives him purpose.

Jack is an all-around family man. Do you hope to have a family of your own some day?

I come from a really great family with my mom and my dad, and my older sisters. I got very lucky with the family I was born into. If there was a guarantee I could have that, then sure.

What have been your favorite roles over the course of your career?

Usually I like to focus on the roles that I’m playing. So right now, Jack Pearson is my favorite. A year ago, when I was working on The Art of Racing in the Rain, that was my favorite. I don’t really go too far in the future or too far in the past with anything. I more enjoy spending time with other great actors, such as Adam Sandler, Nicole Kidman, Sylvester Stallone and Amanda Seyfried. There are so many great actors and directors and writers that I’m lucky enough to work with.

Speaking of that, what was it like to work with actors such as Sylvester Stallone in Rocky Balboa and Creed II, and Nicole Kidman in Grace of Monaco?

Incredible. They are titans of our business and they are deeply artistic. Watching them expect of themselves and the group because they put so much work in is really inspiring.

What can you tell me about your new movie, The Art of Racing in the Rain?

It’s about a race car driver and he has a dog, and the film takes place over the course of the dog’s life, from when he’s a puppy until he’s old. The film is narrated by the dog as he watches his owner go through auto racing, meeting a woman, falling in love, having a family, going through the ups and downs of life and how you get through those down times.

What was it like working with a dog as a co-star?

Amazing actually. We had a nine-year-old dog for the later years, a two-year-old for the younger years and a whole bunch of puppies. It was a different discipline for me. Dogs are trained to go from this place to this place and to sit down and then they get a treat. But what I needed very much was a scene partner. So it was a lot of conversation between myself and the trainers so I would have a dog that was emotionally connected to me, and I was emotionally connected to [him]. So it wasn’t just like a robot going from one place to the next.

What do you hope viewers take away from the movie?

I think the understanding that there is something bigger operating around us other than the world we exist in. That the universe is looking out for us, and the mystery of life—where it comes from and where it goes—is great and beautiful and nothing to fear. It’s a positive, heartfelt, life-affirming kind of movie.

You also have a production company. How do you choose which projects to take on?

I have partners, and we all collectively try to look at what we want out in the marketplace—the stories we want to tell and the writers we want to work with, because it’s important to all of us. They are human stories about struggles and greatness and everything in between.

How does acting make you a better producer or vice versa?

I think the broadening and understanding and the entirety of what production is. As an actor, you focus a lot on yourself and maybe your scene partner. As a producer, you have to focus on everyone and everything. So one definitely does inspire the other. As an actor, you understand that you can’t be so selfish; that you actually have a moving machine around you that you are immersed in. As a producer, you’ve got to have the right people in the right positions and allow them to do their jobs and inspire them to do their jobs.

Why is it important for you to work with veterans through the Iraq and Afghanistan Veterans of America and visit with troops on USO tours?

I think it’s a community that is at times white hot in the headlines and then people forget that we have this fighting force of men and women in uniform and their families that sacrifice a lot for everyday freedoms and way of life and safety and security of the country that we live in.

Are there any other charitable organizations that you support?

I took a trip with Red Nose Day in April and spent some time with kids in some pretty horrible places. I was inspired to see the work that they’re doing to help kids in impoverished places. Pretty much anything to help a kid out and the veteran community—that’s where my heart goes.

Fun is a relative word, isn’t it? I work for fun.

Who or what inspires you?

My mom and my dad. My friends. Other people I work with and other people I’ve never met. I find inspiration in a tree that’s stood on a street that I’ve passed for the last 24 years. That inspires me. That’s impressive.

Being a good person.

What message would you like to give your fans?

I appreciate you all. I’m sure I’ll disappoint you, but hopefully not too often.

A Place in the Sun

A Ray of Sunshine