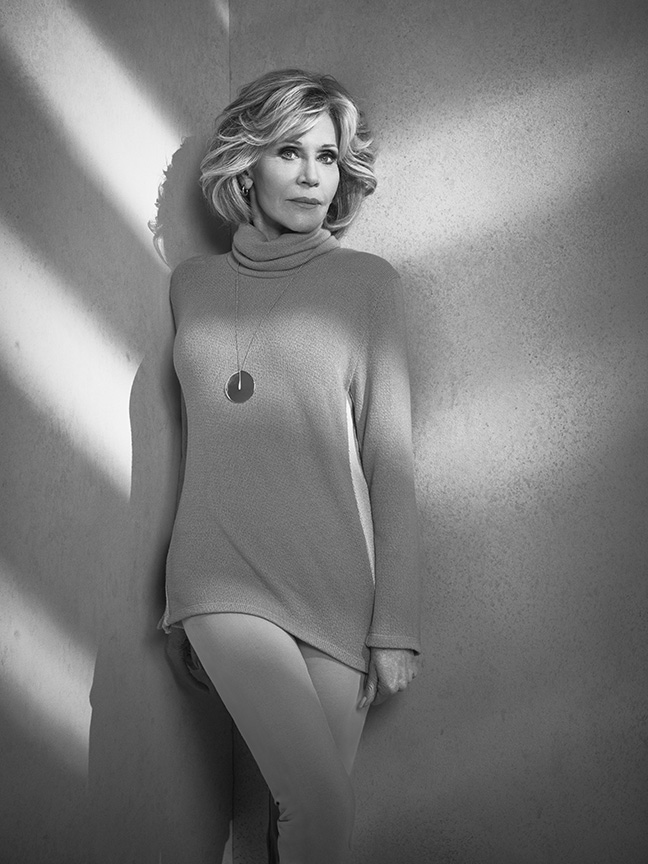 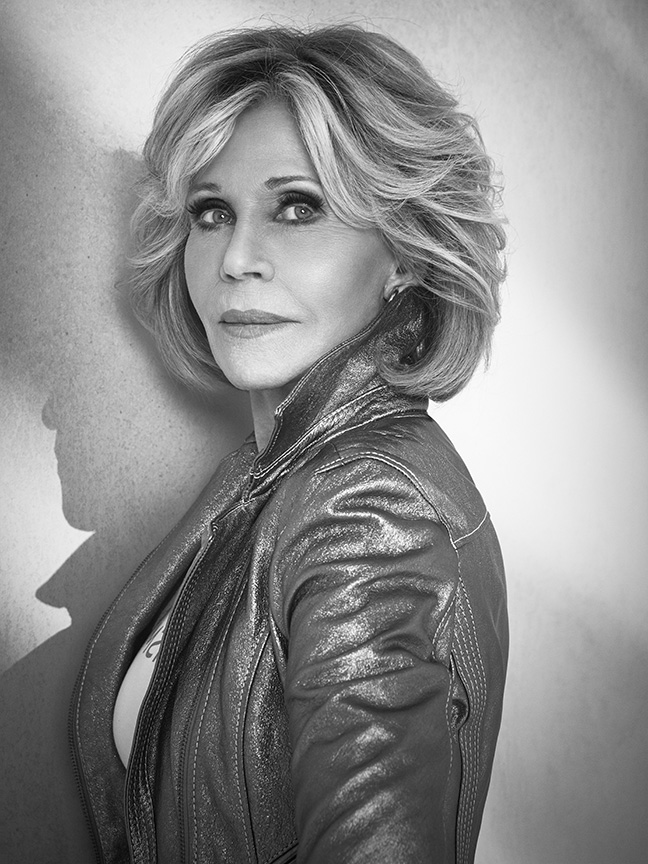 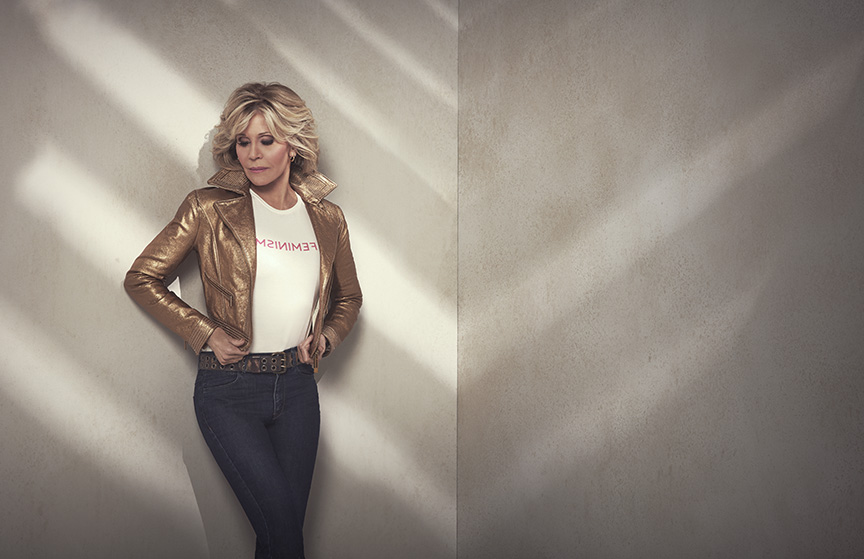 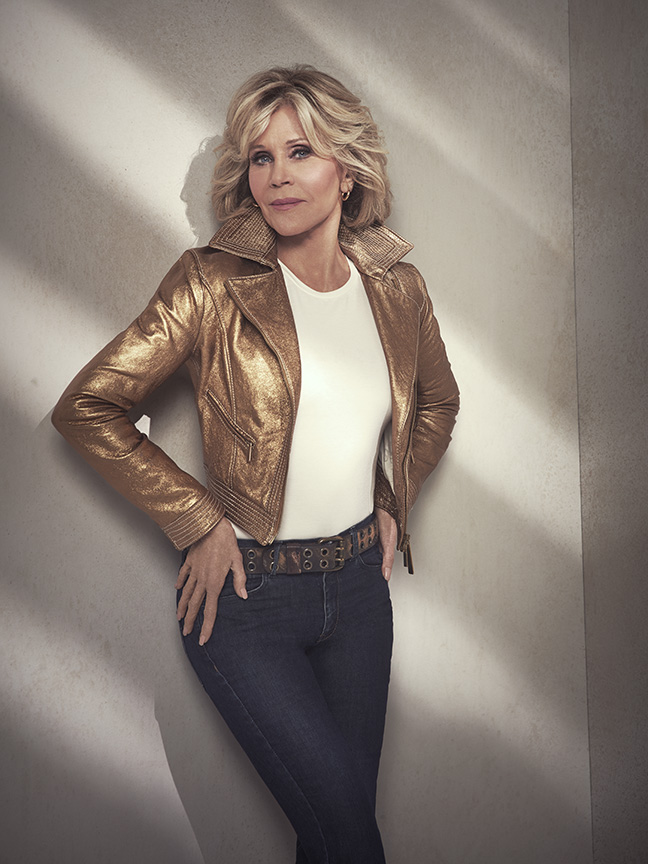 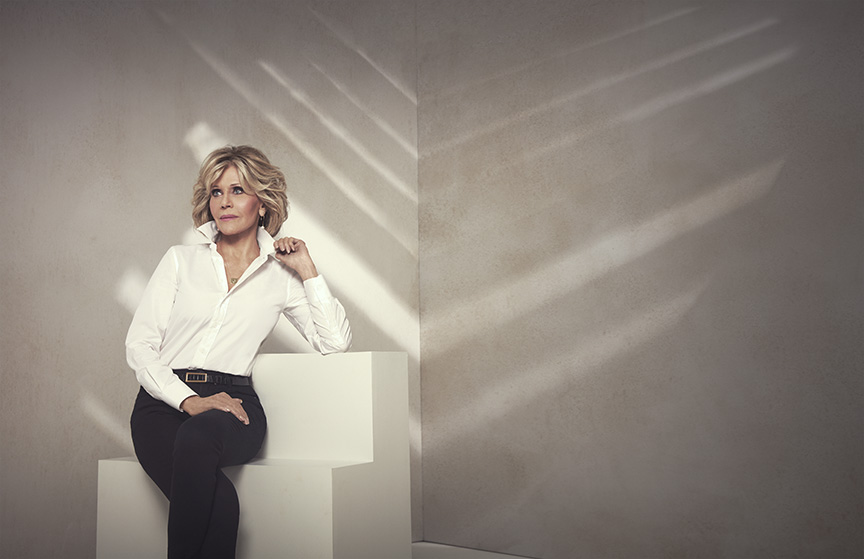 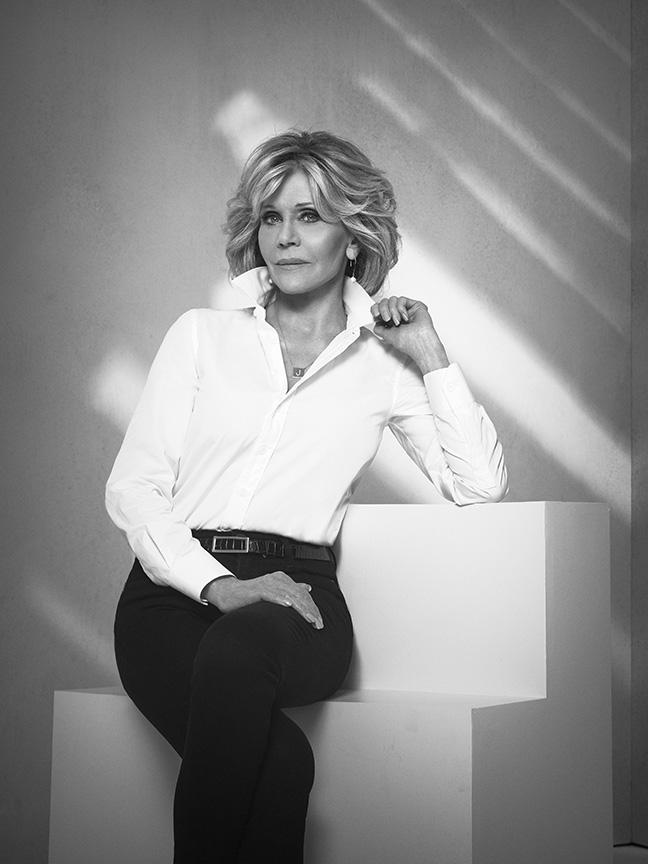 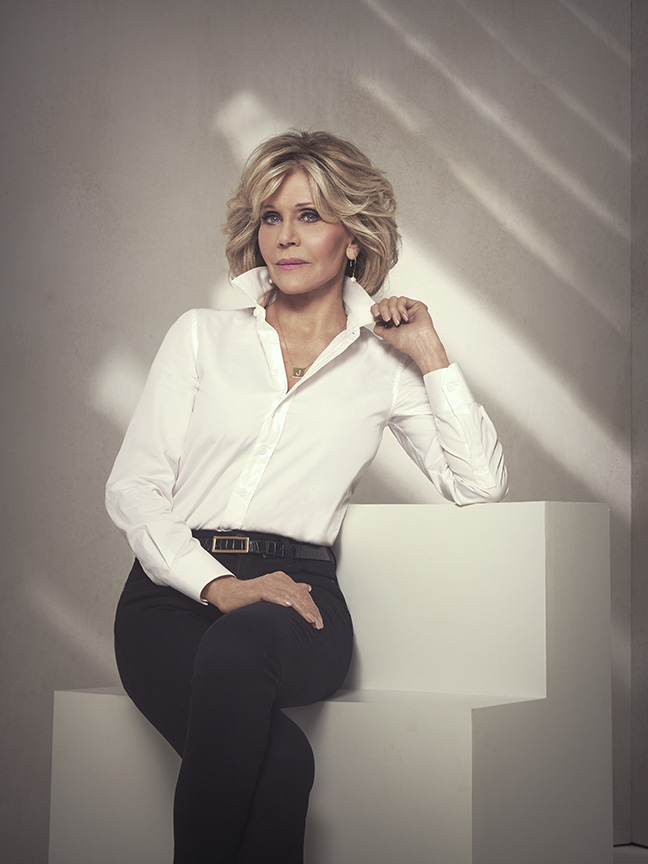 Interview and photography by { John Russo

Back in the 1980s, during Jane Fonda’s reign as high priestess of exercise videos (the original Jane Fonda’s Workout remains the best-selling VHS of all time), women were aerobicizing in leotards, tights and leg warmers—an unforgiving spandex uniform that made the most of every body’s imperfections. But that was then and this is now. The fitness tides have turned from high-impact to gentle-on-the-joints; Fonda no longer implores exercisers to “feel the burn”; and her workout wardrobe has gone from skintight to comfortable enough to wear all day long. At 81, Fonda may now be a solid member of the senior citizenry, but she is still sexy, physically fit  and phenomenally stylish, both in real life and on the Netflix comedy series Grace and Frankie, which was recently renewed for its sixth season. She is committed to self improvement and accepts responsibility for her past mistakes. And she adamantly encourages other women on the far side of middle age to stay both active and fashionable in order to live their best lives. “We are, after all, the fastest-growing demographic in the world,” says the eternally youthful icon.

What advice do you have for women who have never exercised, or who haven’t exercised in years and want to get back into it?

First of all, work with a trainer or someone who’s had a lot of experience, who can show you what to do and what you shouldn’t do. For example, how to warm up and cool down, and how to be sure that you stretch. Another thing that’s very important is, don’t get discouraged. It doesn’t matter if you have never worked out before. It doesn’t matter how old you are. I’m 81 years old, and if I had never worked out before in my life, it would be a great time to start. It is never too late. You just want to go slowly. You want to do it carefully. Don’t push too hard. But moving when you’re older is one of the most important things you can do for your health and for your mental attitude. It’s all about making you feel the best you can be at whatever age you are. It’s about making you feel comfortable, no matter what size you are. It’s about being comfortable in your skin and in your body.

You always look glamorous at red carpet events, but how do you dress when you’re not in the spotlight?

Fitness is such a passion for me, and I spend so much time working out, walking or hiking, so I tend to spend all day in the clothes that I wear to work out. And I just like to throw things over that will make them look fashionable. They may be workout clothes, but I’m making a fashion statement at the same time. Functionality and comfort, but also a little pizazz.

Which of your movies would you like to make into a sequel?

I want to make a sequel of 9 to 5 because the challenges facing office workers today are even more severe than they were in the 1970s.

Is there anyone who you would love to work with?

I wish I could work with director Paul Thomas Anderson. I think he’s a genius.

Have you ever worked on a project and later in your career thought, “What the hell was I thinking?”

I made a film very early in my career called In the Cool of the Day, which was really bad.  I’m not sure if it was even released, but Peter Finch and Angela Lansbury were in it, so I wasn’t alone in my error.

If you were able to go back in time and have a do-over, which part of your past would you choose and what would you change?

I wish, when I was in Vietnam in 1972, that I had not gone alone or gone to that gun site and allowed myself to be seated [on a North Vietnamese anti-aircraft gun installation]. I still would have gone, but would have changed those parts of my trip.

If you could tell someone who has passed away one thing, who and what would that be?

It would be my mother and I would say “I forgive you and I love you.”

Catapulted to stardom as the lead in ABC’s #tgit firefighter drama Station 19, Jaina Lee Ortiz is sizzling hot, yet she couldn’t be any cooler.

LOOKING ON THE BRIGHTSIDE

The Talented & Industrious Artist Katie Bright is Taking the World by Storm!