Hoteliers, restaurateurs and entrepreneurs, husband and wife dynamic duo Alexandra and Shawn Ellis are making their mark in the hospitality industry. 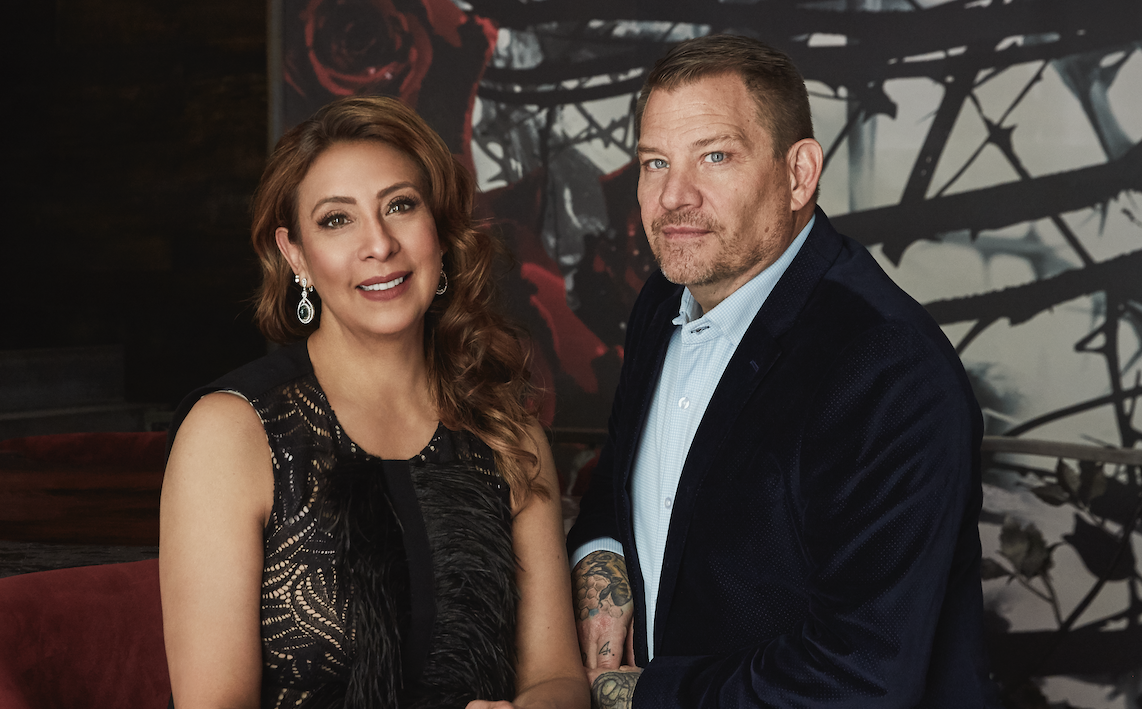 The best things in life seem to come in pairs—peanut butter and jelly, coffee and cream, gin and tonic—and this is true of Alexandra and Shawn Ellis. Hoteliers, restaurateurs and entrepreneurs, this husband and wife dynamic duo are making their mark in the hospitality industry. “I truly believe the hardest working person in the room will get ahead,” Shawn says. “Get up first, go to bed last and believe in yourself.” With a five-star restaurant dubbed as the perfect addition to LoDo Denver, the couple continues their endeavors with Hotel Carbon, which is expected to launch in 2020 debuting in three locations, Denver being the first.

Share with us a little background on yourself. How did you both get started in the hospitality industry?

Alexandra: I was born and raised in Venezuela. When I was 18, I applied for immigration to the United States to follow the rest of my family who was already there and was finally approved after 11 years of waiting. I was hired by Emirates Airlines and was chosen to fly on the private flights for the Royal Family of Dubai. During this time, I was exposed to the highest-level service and finest locations in the world, which eventually led to my passion for hospitality.

Shawn: I graduated from The Culinary Institute of America in Hyde Park, New York, at 21 years old. Right out of school I was hired by Sheraton Corporation as a management trainee in the Hawaii-Japan Division of Hotels based in Honolulu during the region’s peak from 1985 to 1991. I was on the team that conceptualized and opened hotels in Hawaii, which helped display my creativity at an early stage in my career.

Now that we know how you started your careers, how did you meet each other?

Shawn: We met two years ago as single parents raising our sons independently. I was hosting a dinner party at my house where Alexandra was a guest.

Alexandra: He was cooking Cuban food, and I decided to offer him some coaching on his seasonings. After a few years and several bits of advice on seasoning, we decided to combine our families into one with my two sons Gabriele (22) and Loris (18), and Shawn’s three sons Remington (23), Sterling (22) and Windham (19).

How many projects have you done together?

Shawn: To date we have built four restaurants and designed and patented a hotel concept. In Washington, we opened and sold Rose & Thorn and Longhouse. In Denver, we built Rose & Thorn and Double Barrel Club and would like to hold onto these two. With two restaurants under our belt, we decided to also take on Hotel Carbon.

Where did the concept/philosophy of Rose & Thorn come from?

Shawn: I try very hard to create layers of meaning in every concept I debut. My folks have been married for 65 years and have this amazing symbiotic relationship. They have a relationship where they can either be the same person or be complete opposites. My mom’s favorite flower is a rose. So, I guess that makes my dad a thorn, but really it’s about the yin and yang of everything in life.

What was the inspiration for Double Barrel Club?

Alexandra: We spent time in Cuba traveling and exploring the culture so we decided to create the concept based on the Cuba’s supper club era during the 1940s and 1950s. Our interiors are centered around a collection of different furniture from old supper clubs in a warehouse in Havana. Shawn wanted to feature rum in this location so we settled on the idea of a 1959 Havana speakeasy. During that time, you can imagine people trying to hang onto the “good old days” but they were afraid of the risks to come. Hence, the barrels being tapped and served in an underground environment. This is why we created the underground Double Barrel Club.

What can you tell us about the concept of Hotel Carbon and how you came up with the idea?

Shawn: I had been searching for a way to create a different type of hotel theme for years and had played around with different designs but was unable to put my finger on the exact concept. After Alexandra and I combined our families, we found ourselves with five athletic sons, three being at the collegiate level during that time. As my ideas are always theme-based, we decided to design a hotel that caters to traveling athletic teams. It took us a long time to create the layers, and ultimately, we reached a level of design that could be patented. The big picture of creativity is easy for me; Alexandra is about polished results and details. Although the process was time-consuming, the relentless commitment to the end served as the best result.

You have had great success in the restaurant business, so why hotels?

Shawn: Most of my life has been spent in the hotel business. The restaurants were something that came naturally because of my education, but I prefer the hotel side of the hospitality business.

Alexandra: Having spent so much time in hotels in my career, I know the quality level I want to see. To create our own concept, to patent it and then to see it come to life is very exciting.

Share with us some challenges you faced along the way, and how you overcame them…

Alexandra: I am more of a slow and steady progressive person. Although I have not had big setbacks, I’m still human and go through difficult times like everyone else.

Shawn: In 2008, I lost everything: my money; my investors’ money; and my business. I was living in Las Vegas and was highly leveraged. I was bankrupted both personally and professionally. One of my investors sued me and my name appeared in the newspapers weekly, but I never once responded to the calls to tell my story. At the time, I thought the entire thing was my fault and, for two years, I blamed myself. When the full scope of the economic crash came into view by 2010, I realized I was just another guy that had to start over. So that’s what I did—struck a settlement with the investor suing me and started over. I can definitely say that the economic effect of that period shaped my life in a way that I don’t care to talk about. I like to keep the lessons fresh and the recollection in the past.

How does working with one another affect your personal relationship?

Alexandra: We spend seven days per week together, and we live an hour from the city. When we drive, we can be creative, so we talk endlessly about details and nuances in our concepts.  We have two more hotel concepts that we will announce when the time is right. We find our own time to recharge our batteries and do our own thing.

Shawn: There was a time in my life when I was raising my sons and didn’t have a partner. I just had my head down and was grinding out life. As my boys got older, I met Alex and my life changed. I found a purpose—a direction for my creativity. I would not change it for the world.

Four Seasons Resort Oahu at Ko Olina offers a serene beach setting that feels worlds away from the hustle and bustle of Waikiki.