Where to Stay Right Now

In the City That Never Stops Opening New Hotels 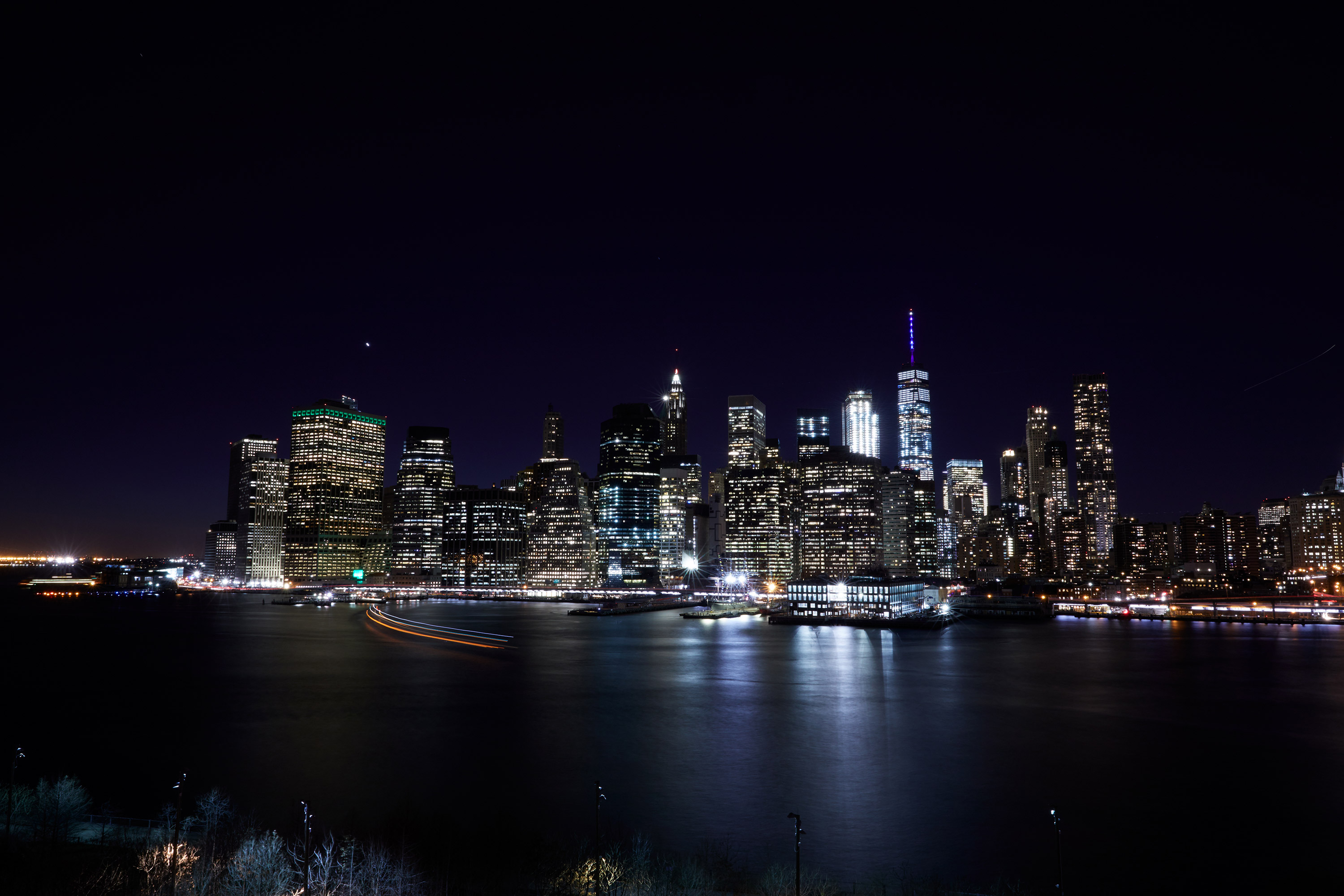 Follow the buzz to the hippest new hotels in New York City—five luxurious lodgings located in Lower Manhattan and beyond the bridges into Brooklyn.

You’ve probably already experienced plenty of Uptown-style opulence. Perhaps your usual go-to hotel in Gotham is one of the icons, like The St. Regis, The Pierre, Four Seasons New York, Ritz-Carlton Central Park or The Carlyle. Now it’s time to luxuriate with A-listers in other parts of the city, where the vibe is cooler but the elegance remains the same. These top five recent openings in far-from-Midtown locations offer design-forward architecture, spacious rooms, museum-worthy art, restaurants helmed by celebrity chefs, rooftop cocktail bars and splendid skyline views. 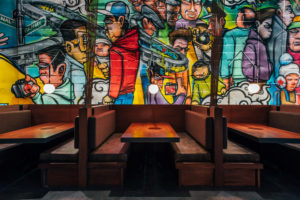 Developed by a family with deep roots in the local Asian community, the high-rise’s modern design by Wimberly Interiors maintains a deep respect for the neighborhood’s rich history and culture, with bold works of art by Beijing-based graffiti artist Dake Wong. 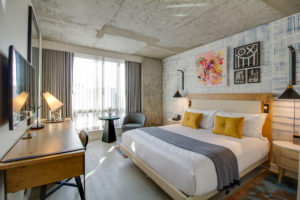 Each of the 229 airy guest rooms and suites feature vintage black-and-white photographs from the collection of the nearby Museum of Chinese in the Americas, plus Lefroy Brooks rain showerheads and Jonathan Adler custom-scented amenities in the bathrooms.A second-floor art gallery is the permanent repository of Heart of Chinatown, an exhibit featuring artifacts unearthed while the hotel was under construction. Ground level, the cool kids gather at Rice & Gold (@riceandgold) for Executive Chef Dale Talde’s global mashup of Chinese food beside a wildly colorful graffiti art installation by local artist Ewok One. 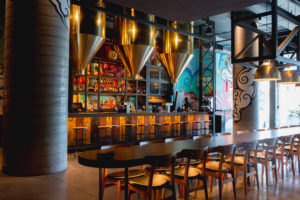 Up on the roof, they settle in at The Crown for exotic concoctions (try the Black Dragon, a blend of Elyx vodka, oolong and green teas, and spiced calamansi) and eye-popping vistas to the north and south. (jdvhotels.com/hotels/new-york/nyc/hotel-50-bowery-nyc) 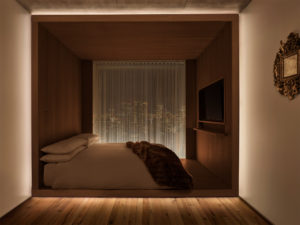 “It’s not shabby chic, retro, industrial, reclaimed…,” says Ian Schrager, mastermind behind the first-ever boutique hotel, describing the concept of PUBLIC (@publichotels), his latest hospitality venture. “It’s simplicity as the ultimate sophistication.” To that end, Pritzker Prize-winning architects Herzog & de Meuron have created a study in spare extravagance. An Instagram-ready lobby with a pair of gorgeous, neon-lit escalators, serves as a community space for lounging, socializing and working remotely. 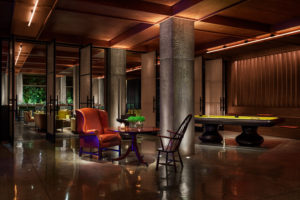 Gone are traditional amenities (doormen, bellman, turn-down service) in favor of minimalist design with maximum modern conveniences—superfast WiFi and cell service throughout the hotel, self check-in, Apple TVs in all 367 guest rooms, communication with management via a state-of-the-art chat bot. Like cabins on a yacht, the 367 “smart” guest rooms are pared down, yet they’re outfitted with everything you need and want. 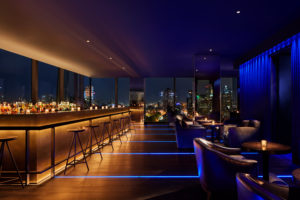 Add to the mix a restaurant and grab-and-go marketplace helmed by Jean-Georges Vongerichten; sexy rooftop bar with a seemingly infinite view of the cityscape; and an avant-garde performance space for movie screenings, art shows, concerts and product launches. Clearly, PUBLIC is more than just a place to sleep. (publichotels.com) 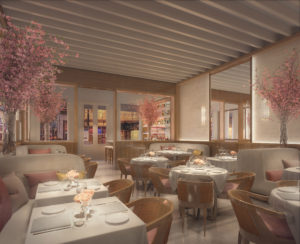 The renaissance of Lower Manhattan continues with a $785 million revitalization of the Seaport District. Coming soon to the previously for-tourists-only neighborhood are tony shops like Milan-based 10 Corso Como, cutting-edge eateries from David Chang and others, a 40,000-square-foot food market by Jean-Georges, river walk, network studios and special event venue for fashion shows and art installations. 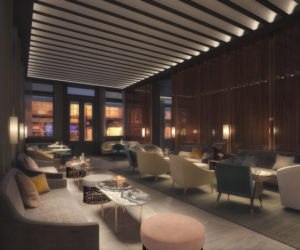 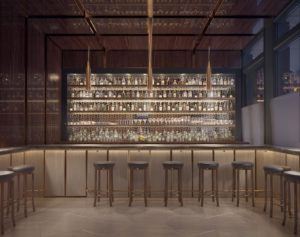 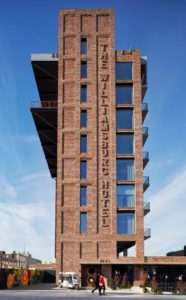 Like a tree, an eight-story building of brick, glass and Corten steel has grown in Brooklyn—in the hot-and-happening Williamsburg section, that is. Designed by London-based firm Michaelis Boyd Studio, The Williamsburg Hotel’s (@wburghotel) glossy brass doors lead to a light-drenched lobby wallpapered with images of quintessentially  Brooklyn people (The Notorious B.I.G) and places (Nathan’s Famous hot dogs). It’s a perfect perch for lingering over coffee and scones in the morning. 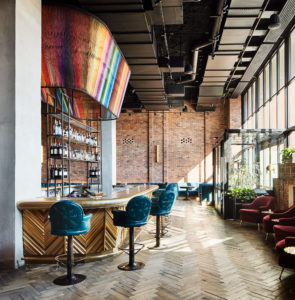 Over-the-top perks include a chauffeured tuk-tuk; Harvey, a veggie-centric restaurant; a rooftop pool and two more watering holes—one a subterranean speakeasy, the other a secret hangout hidden in the hotel’s water tower. (thewilliamsburghotel.com)

The biggest buzz in Dumbo (the pocket neighborhood Down Under the Manhattan Bridge Overpass) surrounds the opening of 1 Hotel Brooklyn Bridge (@1hotels). This first ground-up development from the eco-conscious luxury brand 1 Hotels sits pretty on the Brooklyn waterfront in Brooklyn Bridge Park, an 85-acre stretch of greenery just south of the iconic Brooklyn Bridge, with sweeping views of the Manhattan skyline and the Statue of Liberty. Nature is nurtured in design elements, such as the lobby’s dramatic 25-foot green wall of creeping vines. Committed to sustainability and environmental preservation, the 10-story hotel is 100-percent wind powered and constructed largely out of reclaimed materials—original heart pine beams from the former Domino Sugar Factory, walnut from the Brooklyn Botanic Garden and pine furniture fashioned out of slats salvaged from the Coney Island boardwalk. Spacious guest rooms and suites are environmentally friendly, with custom hemp-blend mattresses; marble rain showers with a 5-minute, hour-glass timer; kombucha in the minibars; and an interior landscape of live plants and trees. There’s a fresh farm stand in the lobby, complimentary Tesla rides to destinations within three miles of the hotel, valet parking for bicycles and bliss at the Bamford Haybarn Spa. Farm-to-table cuisine is on offer in The Osprey, while toasts are made with seasonal craft cocktails in the clubby Brooklyn Heights Social Club, stylish Lobby Lounge and sky-high The 1 Rooftop Bar. Everywhere you look, floor-to-ceiling windows showcase Lady Liberty and New York Harbor. There’s not a bad view in the house. (1hotels.com/brooklyn-bridge)

Chefs Adam Sobel and Michael Mina are fusing the fare of the SoCal and Amalfi coasts at their new Beverly Center restaurant.