Russian-born newcomer Jeff Kenny has perfected an American accent, competed as a ballroom dancer and auditioned for Spielberg—and he’s just getting started. 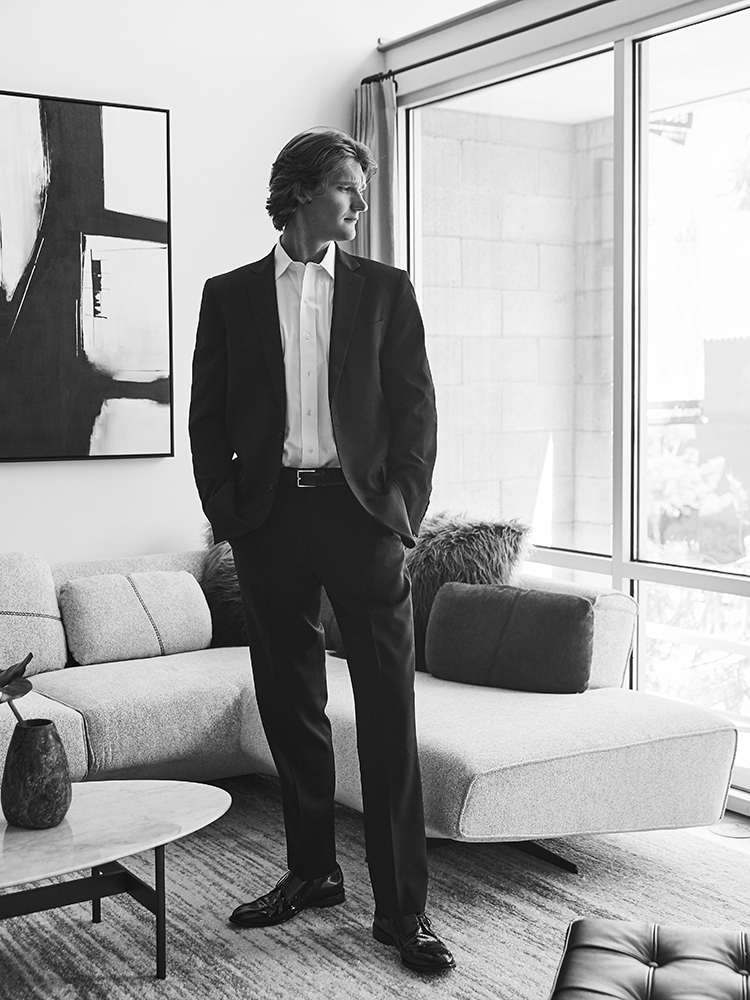 Creativity is all in the family for actor, dancer and musician Jeff Kenny. Born in Russia to an artist mother and a trumpet-playing physicist father, his older brother is, like him, a world champion ballroom dancer, and his younger sister is a pianist who was recently accepted to Parsons School of Design. Based in Los Angeles, the 27-year-old calls himself the “glue of the family” whenever conflicts arise. “I always had the ability to encourage everyone to work together and resolve any life challenges in peace,” he explains. On screen, his characters are not as easygoing. He played a violent mental patient in the psychological thriller Harper Finch and a stoner physics genius who must save humanity in Manifest Destiny Down: Spacetime, both from indie producer-director Jonathan Baker. The latter, an absurdist satire, had its premiere at the 2019 Independent Filmmakers Showcase.

We didn’t have much growing up and went through hardship, so we had to be creative about coming up with entertainment for ourselves in our own free time. I would make my own toys by building planes and kites out of paper and car models out of wood. My grandparents spent time with us outdoors, camping, hiking, skiing, exploring, and it definitely made me see the world as a land of possibilities. My mom would host fun trivia nights with questions about art, history, philosophy and logic, which definitely ignited my brain to seek self-improvement and push my limits. I left home when I was 18, and then studied in Switzerland and the U.S.

Did you grow up speaking both Russian and English?

I grew up speaking Russian, and although I was familiar with English grammar, pronunciation was extremely challenging. I had a pretty thick accent … which was frequently made fun of while [I was] attending Aiglon College in Switzerland. It was my dream to be able to sound American, and I did everything I could to make it a reality. I’ve always had a great ear, and by integrating with Americans, watching TV and listening, I was able to perfect it. The last little touches on particular sounds I still had slight struggles with were polished, thanks to an amazing dialect coach, Patrick Munoz, who I was blessed to meet shortly after my arrival to Los Angeles. Now I have an impeccable American accent, can do a Russian accent if need be, and everyone assumes I am from California unless told otherwise. And even after I tell them, they think I am trying to trick them and that it’s the other way around, that I learned some Russian words.

After [taking] filmmaking classes, where [I] had to learn acting, writing, camera operation, lighting and editing skills, and participating in school plays, I got accepted to an acting for film program at Prague Film School in the Czech Republic. I studied the Meisner technique, extensive on-camera training, dancing, singing, the Alexander technique, stage combat … I acted, wrote or produced over 20 short films, giving me a base for my move to Los Angeles. Shortly after my arrival, I was lucky to enroll in fantastic classes locally at Scott Sedita Acting Studios, where I took on-camera drama, sitcom and scene study.

When and how did you enter the world of competitive dance?

My first dancing experience was when I was only 4 years old. I was a part of and performed in a traditional Russian dance circle club called Donskiye Kazachki. Later I moved on to ballroom dancing, and after group and one-on-one classes, started to compete weekly worldwide. I danced all 10 dances, five of which are Latin (samba, cha-cha, rumba, paso doble, jive) and the other five Standard European (slow waltz, tango, Viennese waltz, slow fox, quickstep).

What is your background in music?

My parents signed me up for private piano classes when I was 5, and I studied music for the next six years. I have taken drum classes in high school and also djembe in college. When I was little … I started writing my own stories and poems, which eventually led to rap exploration. I enjoy listening to hip-hop artists, such as Yelawolf, as to me, good rap/hip-hop, just like film, is about storytelling. Each song transports me into another world with its own feelings, situations and emotions. After moving to Los Angeles, I wanted to work on my vocal and singing skills and recorded a surprise Frank Sinatra album for my dad’s birthday.

How did you land the role in Manifest Down Destiny: Spacetime?

The role found me. The director and I got to know each other working together on another project, a short film called Harper Finch, which is raising awareness about mental illness and has gotten in over 12 festivals. He had me in mind when Manifest Destiny Down: Spacetime was written. My character is an intelligent, adorable, stoner, self-absorbed, kind-hearted genius; he struggles with mental challenges, such as OCD, narcissism, panic disorder, paranoia, agoraphobia, derealization and depression… I really enjoyed tapping into his world, exploring, finding and connecting with characteristics, motivations, desires, addictions, point of view, dreams, fears, hopes and drives in myself.

Who do you admire?

I really admire J.K. Rowling. She was a struggling single mother on state benefits, fighting constant rejection, believing in herself and ultimately writing, in my opinion, the absolutely genius Harry Potter series, selling 450 million books and acquiring a worth of more than $1 billion. I also look up to Benedict Cumberbatch, Bradley Cooper, Liam Neeson and Matthew McConaughey. Their acting technique is … in-the-moment and captivating to watch.

What would be your dream job?

I recently auditioned for the part of Riff in Steven Spielberg’s new film adaptation of West Side Story, and being a part of a project like that, where I could combine all of my skills, such as dancing, singing and acting, and work with such a legendary director, would be amazing.

What do you like to do in your free time?

My favorite museum is the Norton Simon Museum [in Pasadena]. I find something new each time I go. There is nothing better than to sit and breathe in an artist creation; and they have a wonderful garden. I also like to read, play volleyball, skateboard, snowboard, surf, golf, bowl, play darts, meditate, play pool, take karate and boxing classes, ping pong, tennis, drive on PCH, work out in the park, run, ride my BMX.

What are your career goals?

The real richness is not having a nice car, house, comfort, but having the ability to change the world and leave a permanent footmark in history. I would like to be a part of meaningful projects that share good messages, inspire, make people think, question, explore and hopefully get interested enough to engage themselves in artistic journeys of their own.

Boudoir photographer, Matt Mathews, spreads a message of positivity and continues to show others how heartbreakingly beautiful they truly are