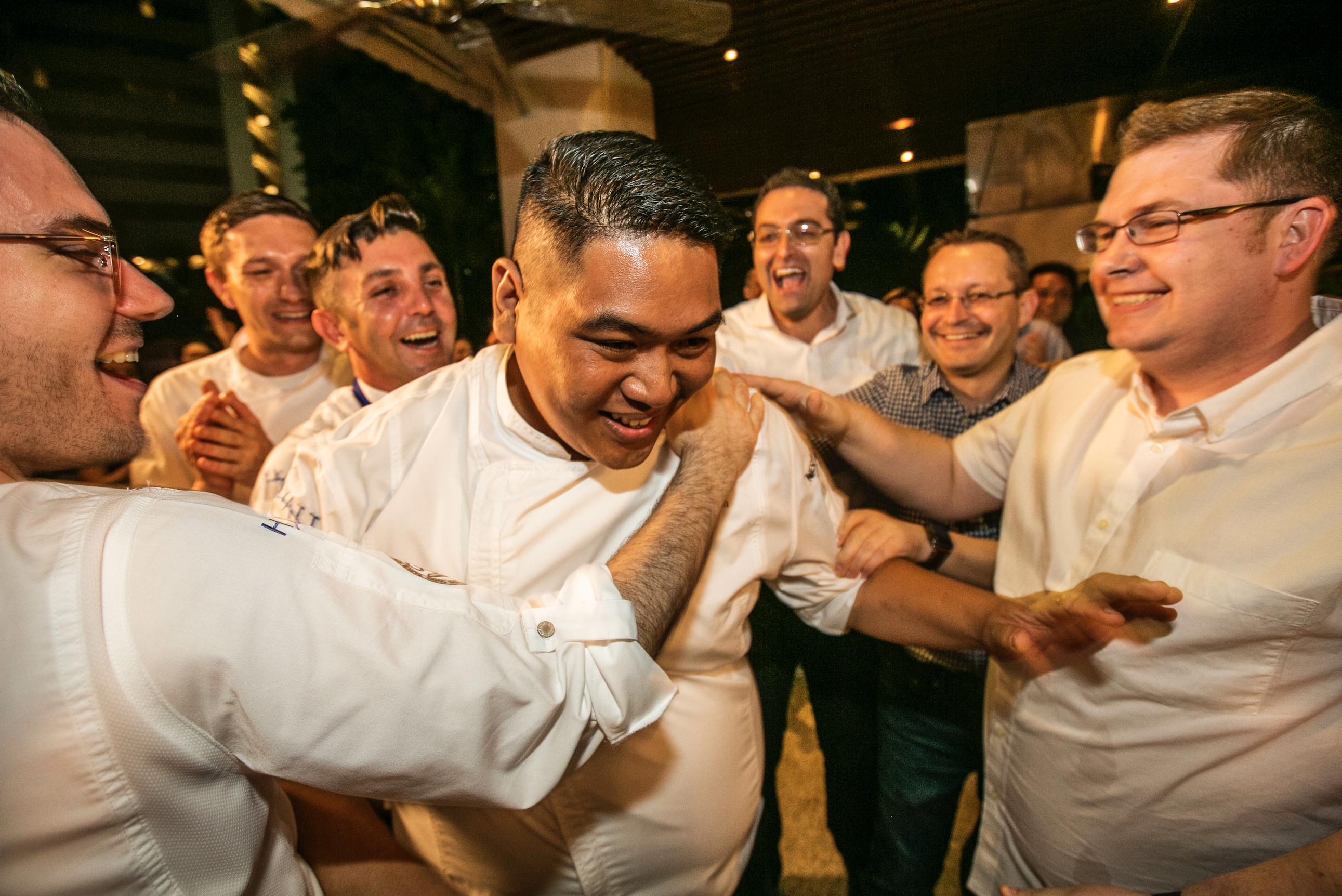 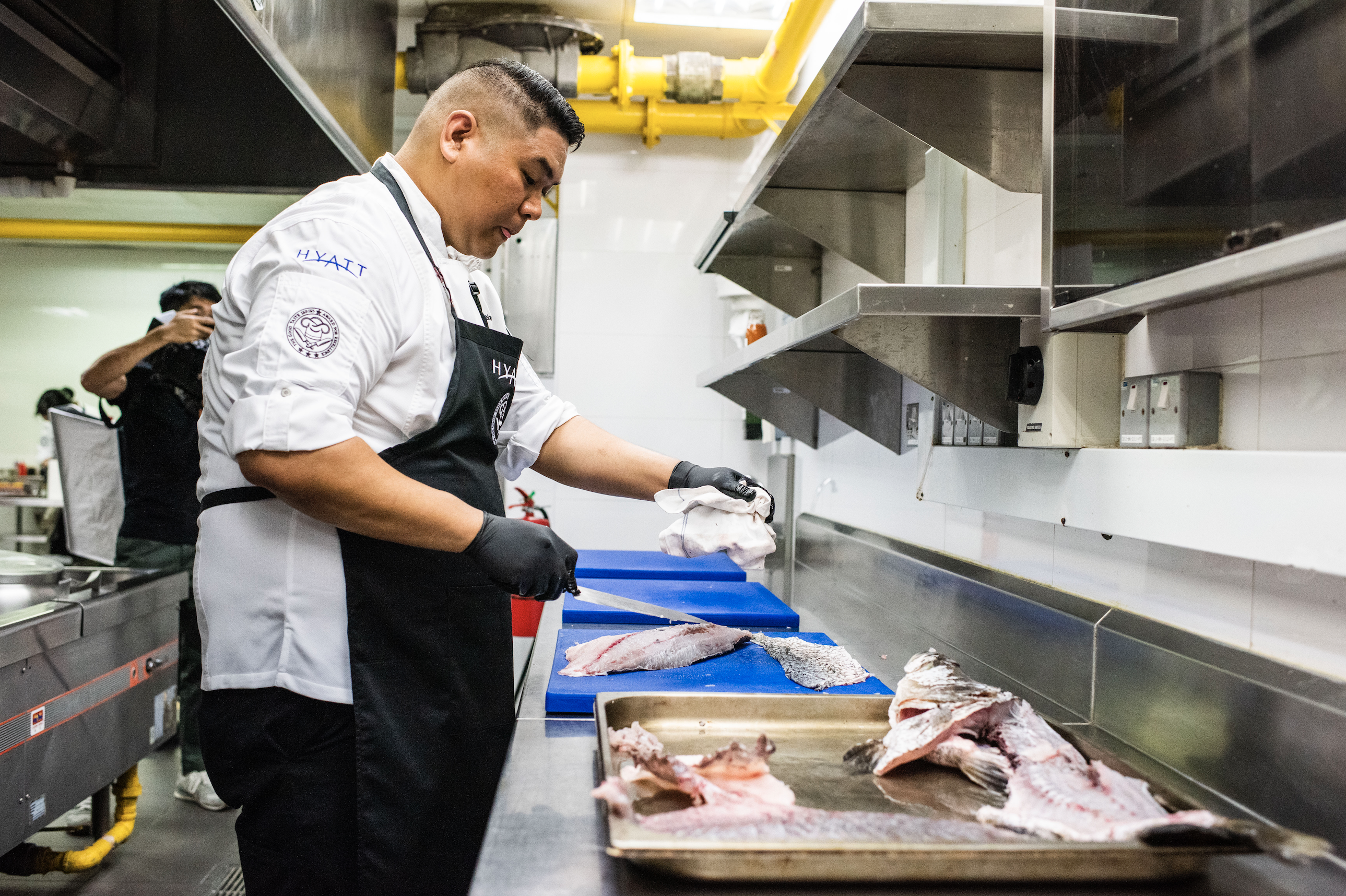 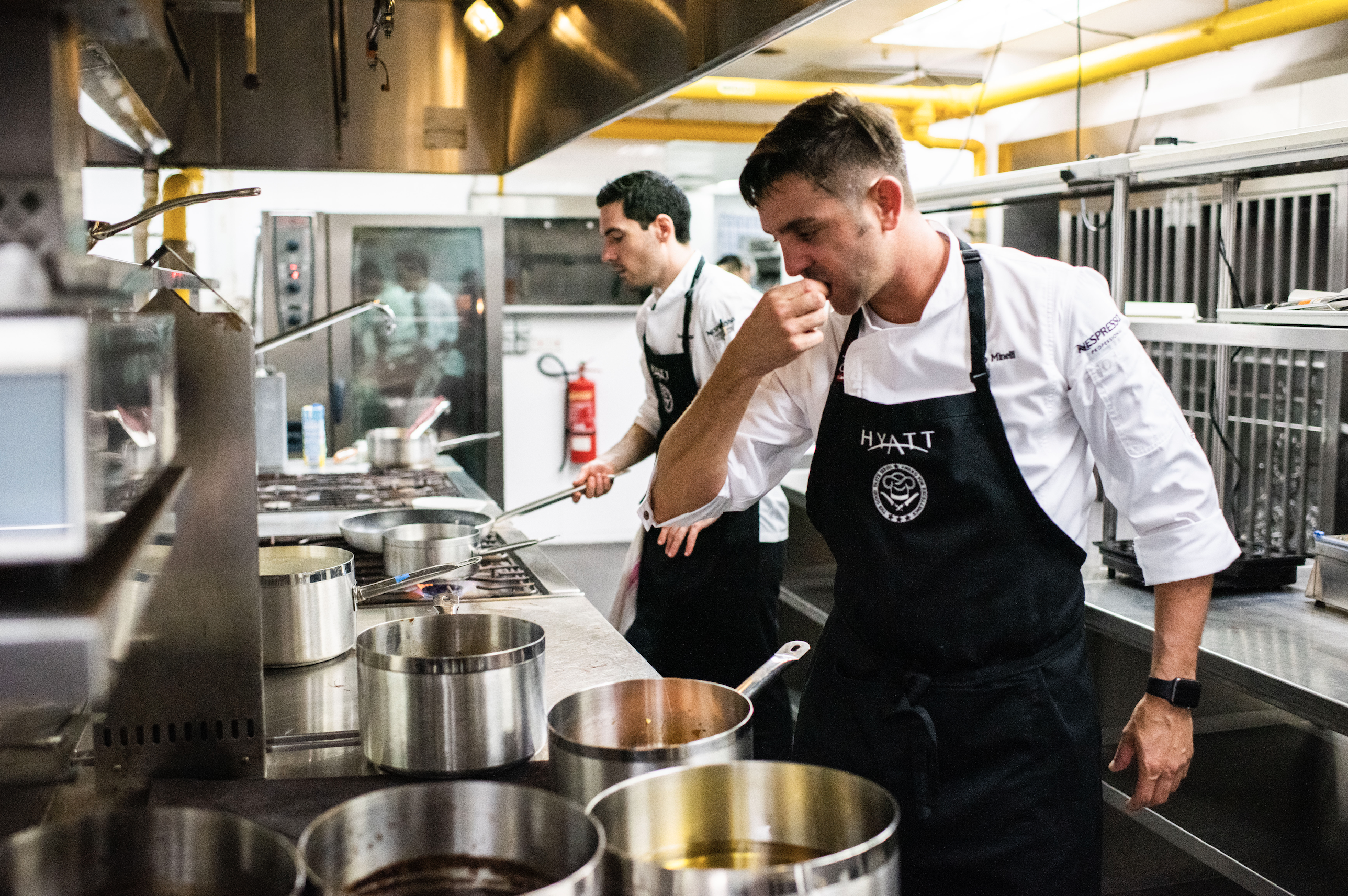 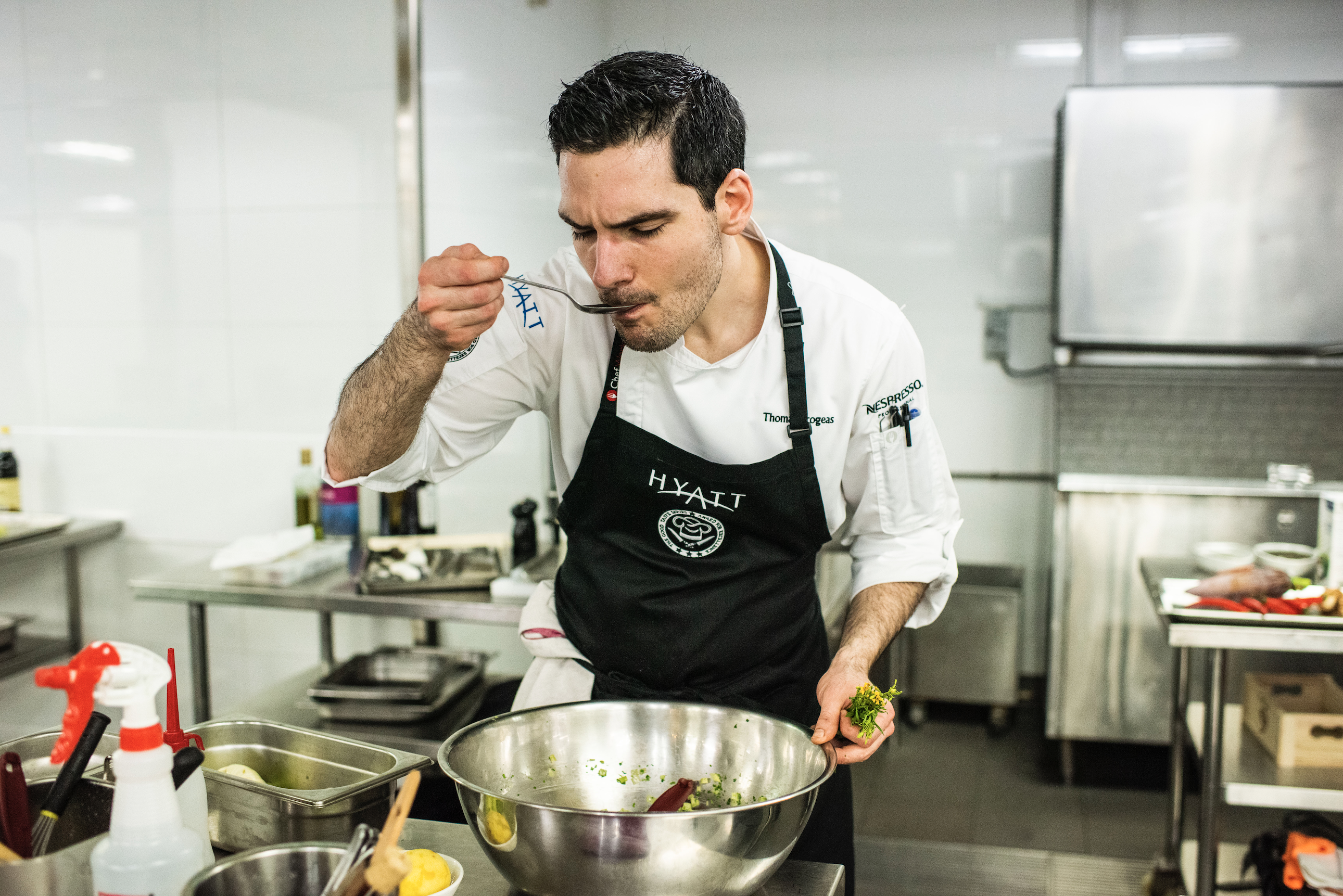 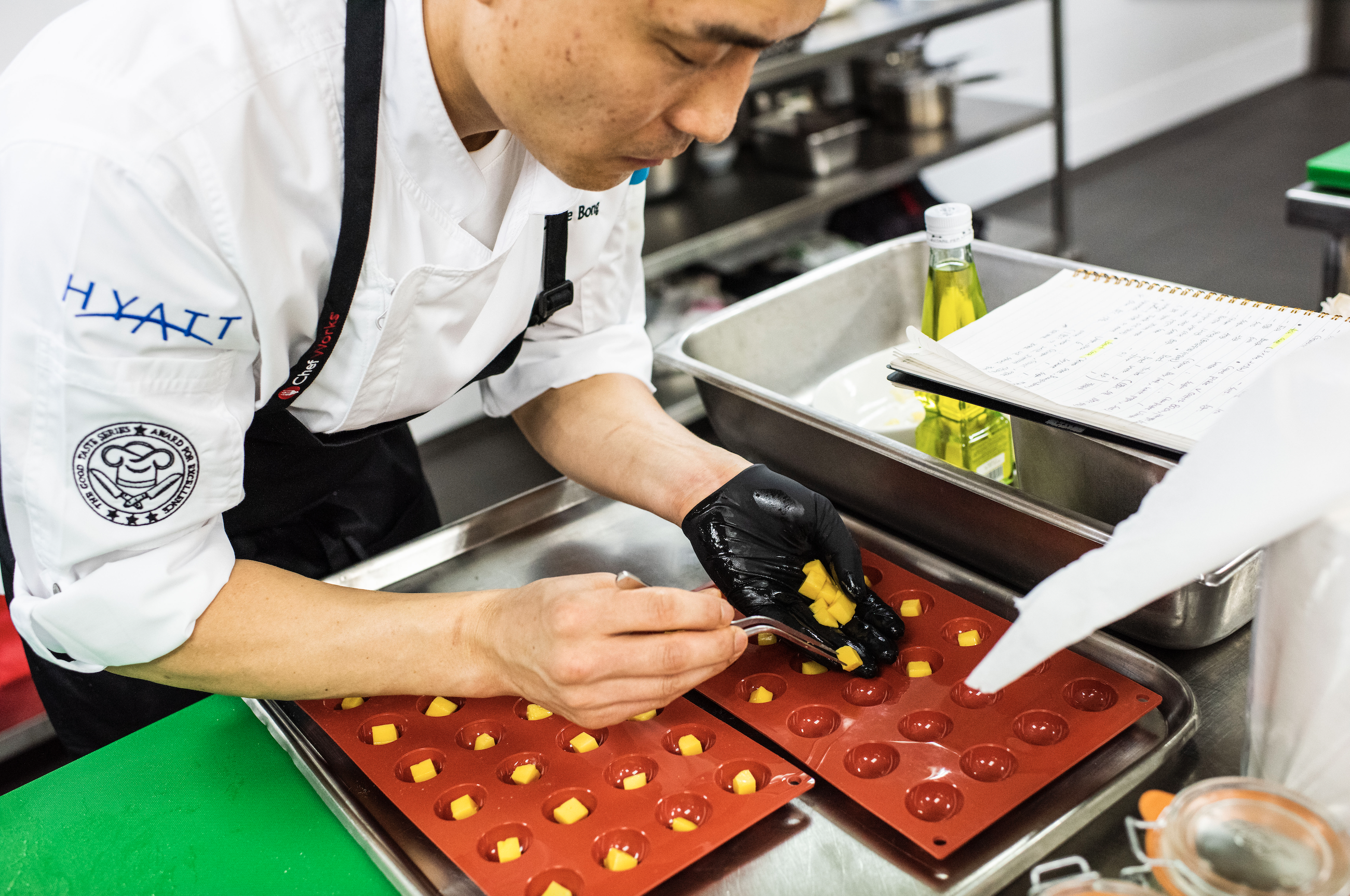 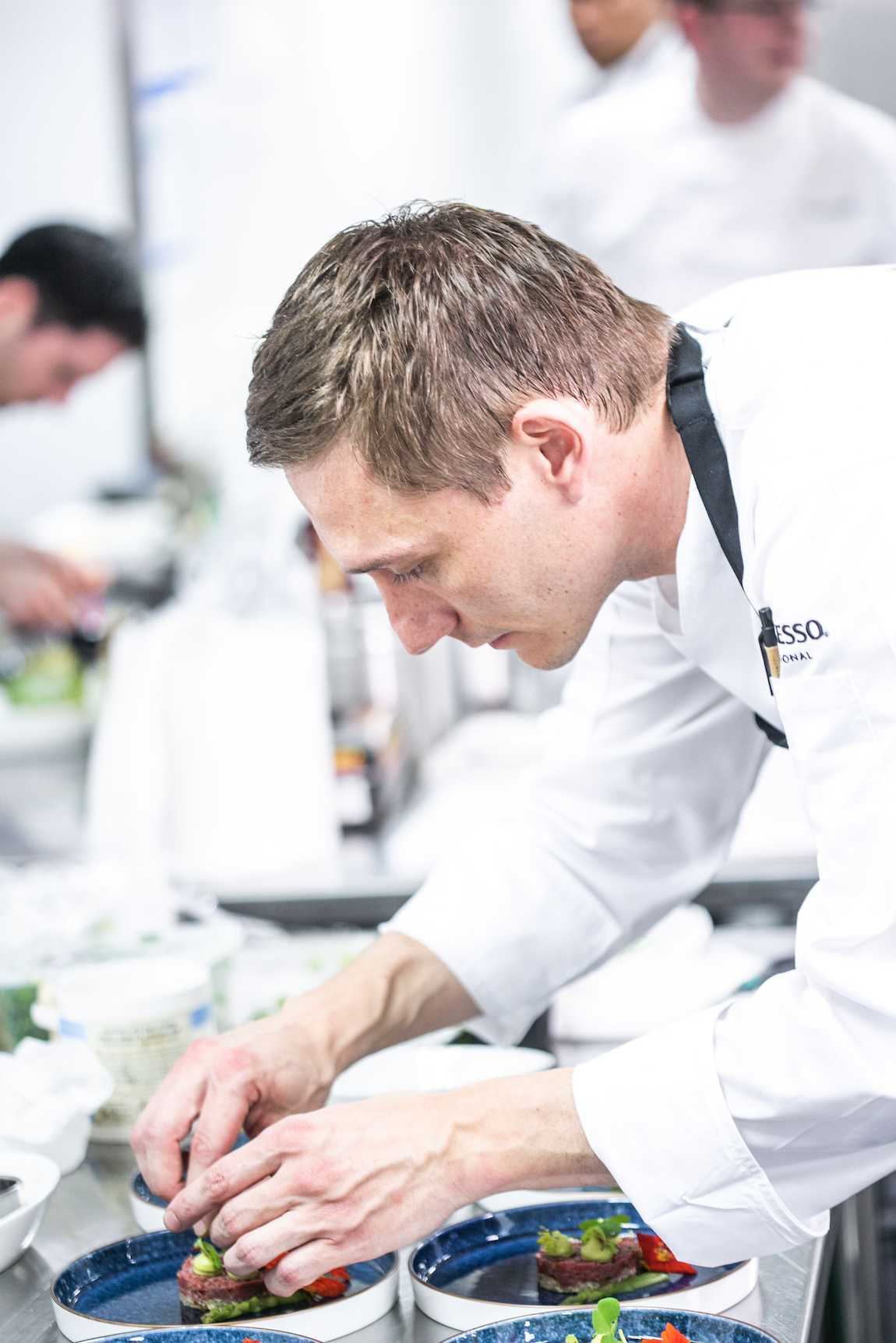 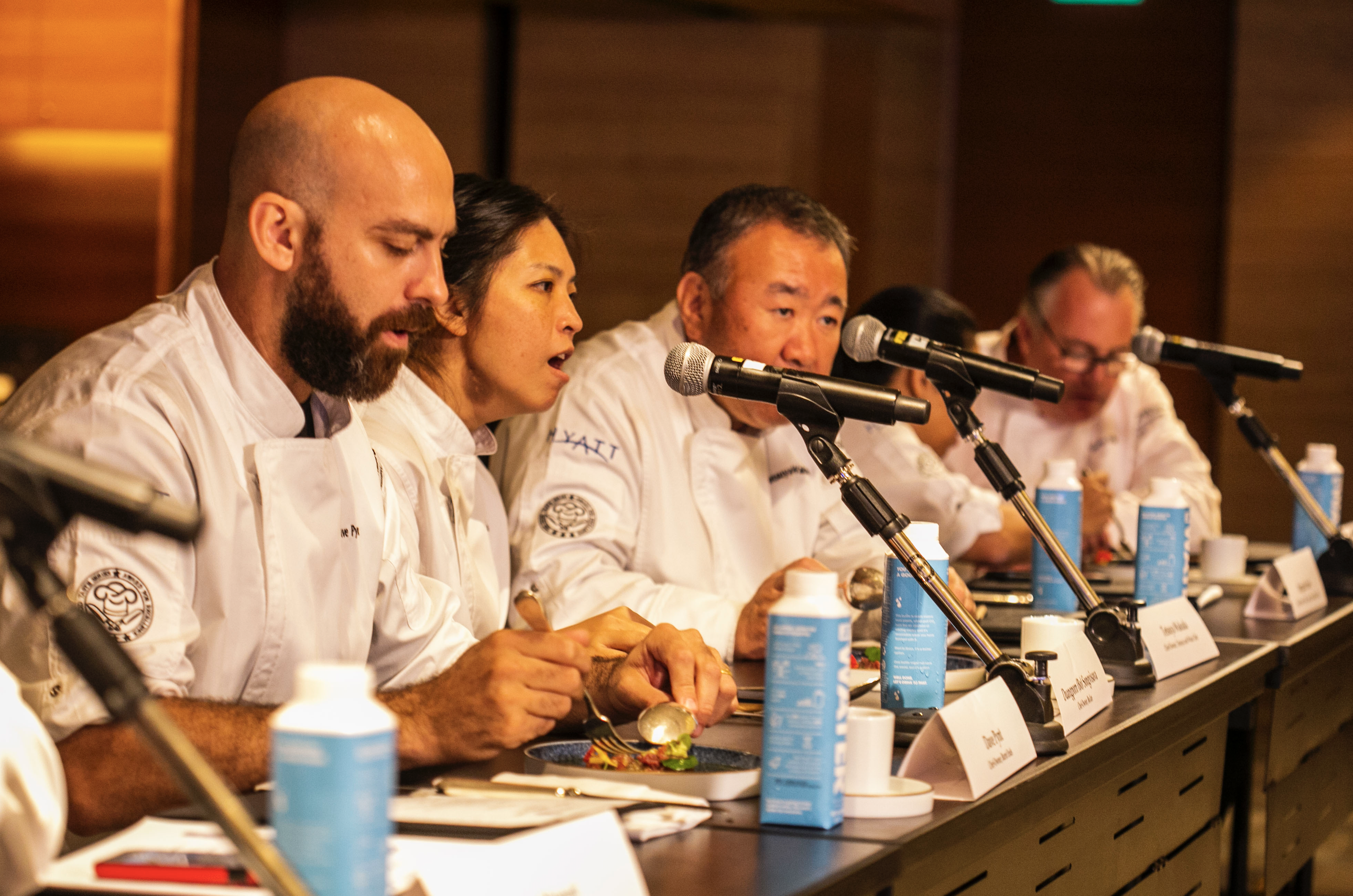 Judges for The Good Taste Series included some of the world's top chefs. 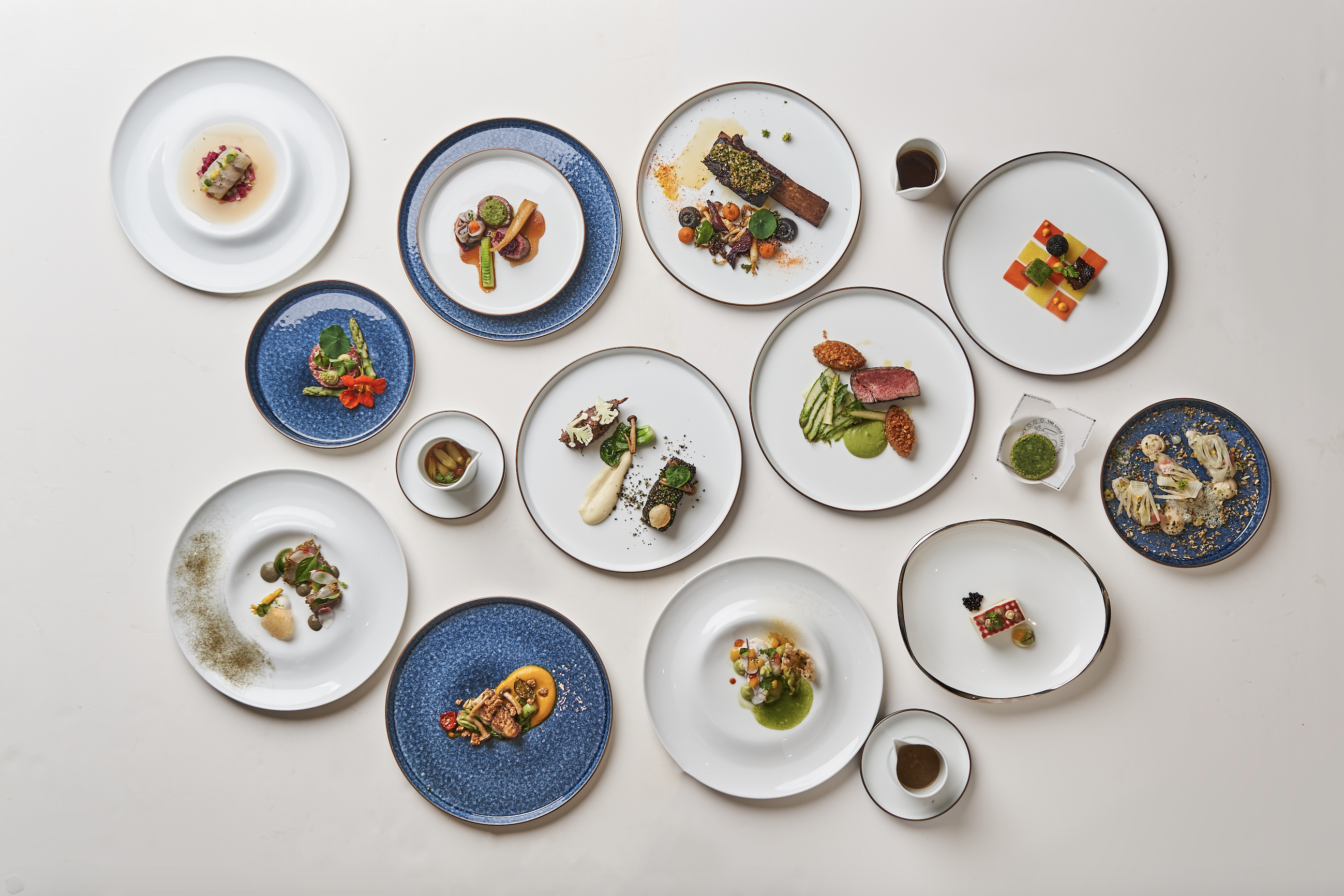 Each chef was required to prepare an appetizer and a main dish using Australian grass-fed beef, sustainably farmed barramundi, home-grown herbs from the rooftop of Grand Hyatt Singapore and organic vegetables from Malaysia. 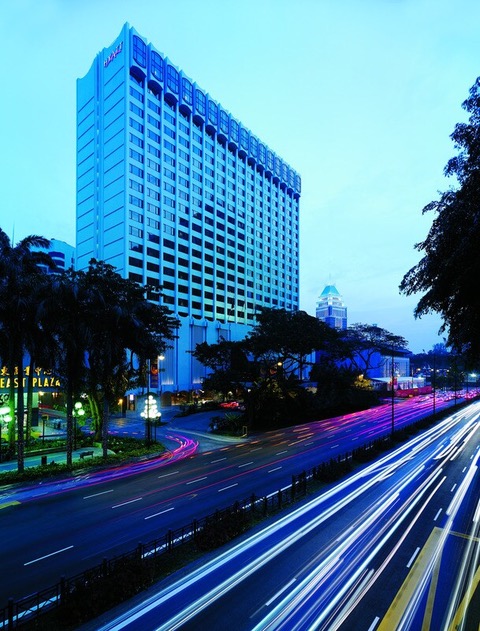 A destination in itself, Grand Hyatt Singapore is centrally located, granting easy access to all the garden city has to offer 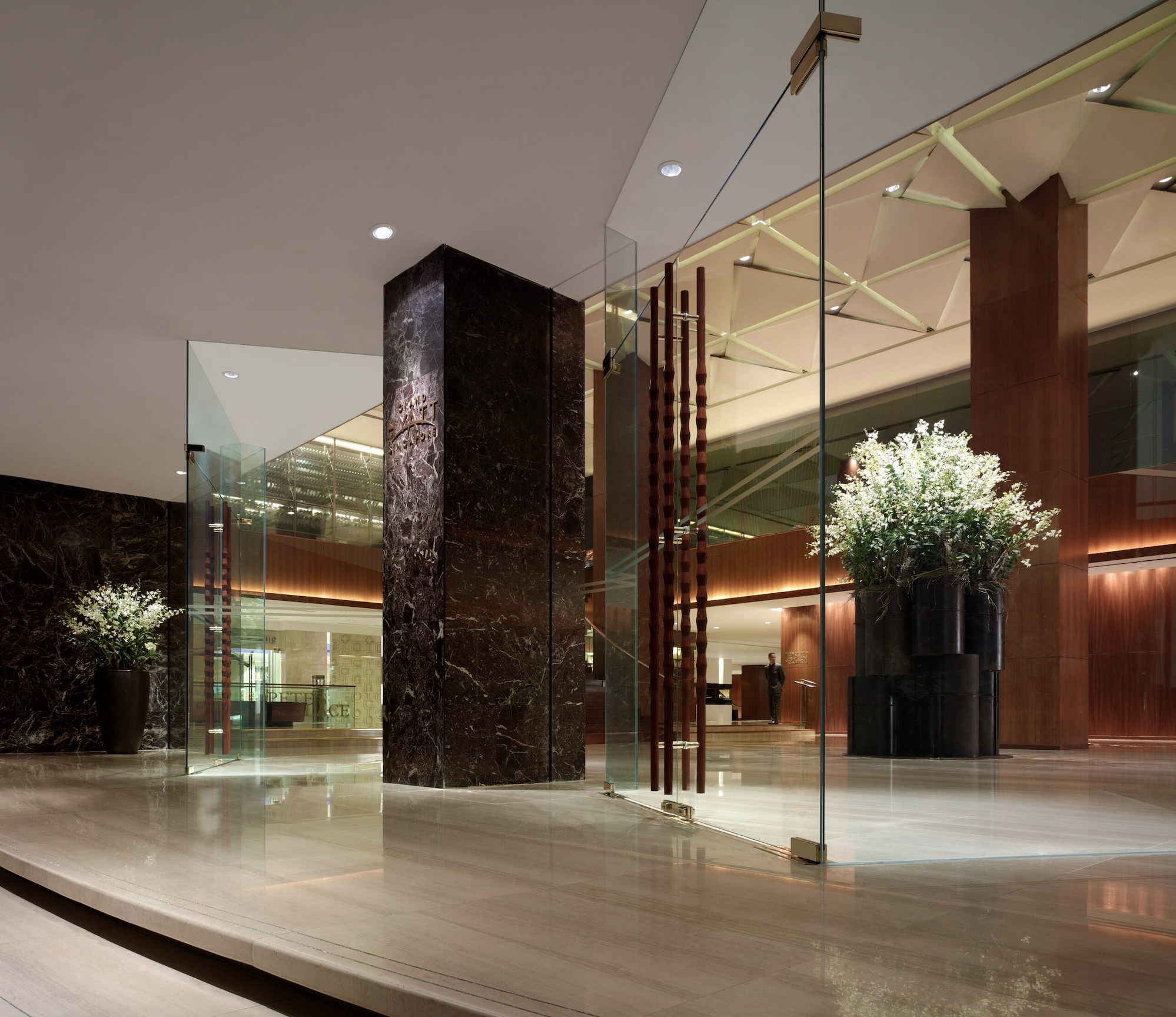 The Grand Hyatt Singapore is in the center of the city’s entertainment and incredible shopping scene at Orchard Road. 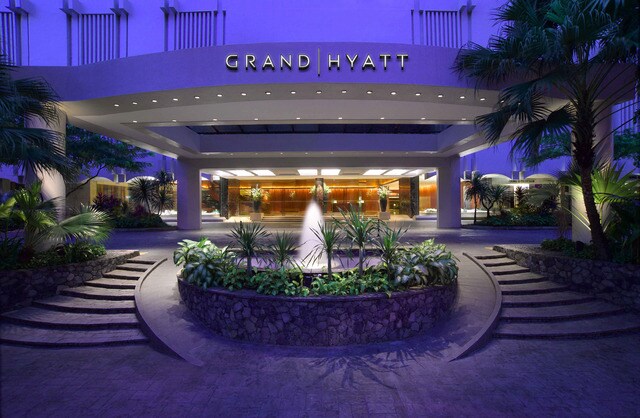 Slightly more than five years ago, a few Hyatt chefs including Thomas McKeown, executive chef at Hyatt Regency Atlanta, and Martin Pfefferkorn, Hyatt’s culinary director for the Americas, cooked up an exciting way for the hospitality company to recognize and retain emerging culinary talent. “Chefs are always the ones in the back, not in front. With Hyatt being known for its strength in food and beverage, we decided, “Why not really celebrate it?” says McKeown, the organizer of The Good Taste Series competition, an annual contest open to anyone from line cooks to executive sous chefs in Hyatt hotels globally. “It’s about all internal development and investing in the people here,” adds Pfefferkorn.

The first event, at which I was honored to be among a small group of judges comprised of media, hospitality and food industry veterans, took place at Andaz Maui at Wailea Resort in 2014. It was a modest affair back then, open only to contestants hailing from Hyatt properties in the U.S., who had each won regional competitions to qualify. They were asked to use local ingredients and regional influences in two dishes that represented Hyatt’s global food philosophy: Food Thoughtfully Sourced, Carefully Served. We judged their creations on taste, presentation, technique and authenticity, awarding additional points for two surprise ingredients incorporated into the dishes. The event was brimming with passion and excitement from morning to night, and left a lasting impression on me.

Each year since then, the competition has garnered increasing attention; it is now a global happening that brings together the crème de la crème of rising culinary stars from Asia Pacific, the Americas, Europe, the Middle East and Africa. The second annual global finals competition took place in April 2019 at the Grand Hyatt Singapore. “We are delighted to host this year’s global final of The Good Taste Series in Singapore, a city known for its diverse heritage, rich culinary traditions and vibrant food and beverage sector,” said Andreas Stalder, senior vice president, food and beverage operations and product development, Asia Pacific at Hyatt.

“Our purpose is to care for people so they can be their best, which includes helping our colleagues grow and realize their potential,” said Mark Hoplamazian, president and chief executive officer, Hyatt. “The Good Taste Series enhances the strong foundation that Hyatt has built for career development—from having inspiring mentors to providing an international platform to showcase our food and beverage talent—that will, in turn, enable our chefs to create unparalleled experiences for our guests.” Hyatt has “always enjoyed the reputation of being a leader in food and beverage,” added Stalder. “Our secret to success is to foster a nurturing environment where we develop and recognize our chefs and provide a stimulating platform to spark their creativity.”

More than 220 chefs from Hyatt hotels and resorts in over 40 countries competed in rigorous regional contests for the coveted opportunity to showcase their culinary chops on this global stage, MasterChef style. A large ballroom was filled with media and VIPs from around the world. Competing chefs—including Lily Liu of Park Hyatt Hangzhou, Leandro Minelli of Grand Hyatt Baha Mar, Sebong Oh of Grand Hyatt Seoul, Jonathan Pasion of Andaz Maui at Wailea Resort, Thomas Progeas of Park Hyatt Paris-Vendôme and Robert Schielke of Hyatt Regency Addis Ababa—prepared dishes for seven prestigious judges and more than 100 invited guests (guests’ votes were weighted and taken into account in the final tally). Judges included Filipino chef Margarita Forés; Bruno Menard, whose award-winning restaurants include the three-Michelin-star L’Osier in Tokyo; Dave Pynt of Singapore’s Burnt Ends; Tetsuya Wakuda, one of the world’s top Japanese chefs; Stefan Stiller, owner of two Michelin-star restaurants in Shanghai; and Dylan Jones and Duangporn (Bo) Songvisava, the husband-and-wife team behind one-Michelin-star restaurant Bo.Lan in Bangkok.

The night before the big cook-off, as chefs clinked their glasses atop sister hotel Andaz Singapore, they were presented with the “mystery black box” containing required items to include in their dishes—Australian grass-fed beef, sustainably farmed barramundi, home-grown herbs from the rooftop of Grand Hyatt Singapore, and organic vegetables from Malaysia. Each chef was required to prepare an appetizer and a main dish using these ingredients. They were judged primarily on taste and presentation, as well as kitchen skills—hygiene, mise en place and technical skills.

Chef Pasion of Andaz Maui Wailea Resort was crowned champion by the judges, with two creations drawing from his Filipino and Hawaiian heritage: barramundi tataki kilawin and adobo grass-fed beef cheeks. “Winning The Good Taste Series is the highlight of my culinary career. It made me realize that my hard work, dedication and staying true to myself have paid off,” he said. “I feel truly blessed to have competed in the global finals, and that I have an incredible support system. I hope winning The Good Taste Series will inspire young culinarians in Hawaii to know it’s possible to be a locally-raised kid on a small island, and still be able to compete with the top chefs of the culinary world.” Chef Minelli of Grand Hyatt Baha Mar and Chef Progeas of Park Hyatt Paris-Vendôme were the first and second runners-up, respectively.

The event has a lasting positive impact all contestants, not only the winners. “Last year Chef Hunter Keels [butcher and junior sous chef at Hyatt Regency Atlanta] won second place at global, and he was one of the two winners in the Americas,” says Colleen Kareti, vice president of operations, Americas at Hyatt. “He had to get a passport to go to the competition as he’d never left the country before. He brought his dad, which was so sweet. The experience meant so much to him, and to us. Of our competitors, [about] 95 percent have been promoted. So almost everyone, if they wanted to grow in their career, they have. We’ve also recently changed the prize. It used to be a vacation or education trip … But we started doing cash, because we found it really means a lot to the contestants to get a packet full of money,” she continues. This year, regional winners received $2,000 cash and an all-expenses paid trip to the finals in Singapore, where they competed for a cash prize of $3,000.

What’s next for the evolving competition? “We’re considering growing the number of competitors to possibly nine, instead of six. We also exploring beverage and pastry elements,” says Kareti. Hyatt is also considering inviting top-tier World of Hyatt members to join the festivities in the future.

Beyond the big competition, the event includes socializing with the chefs, Hyatt executive team members and invited guests. Serious bonding took place in Singapore, and the energy was contagious. After spending only a of couple days with Hyatt execs and chefs, it’s abundantly clear to me that Hyatt’s got serious heart!

roots, the Hawaiian culture and his travels. 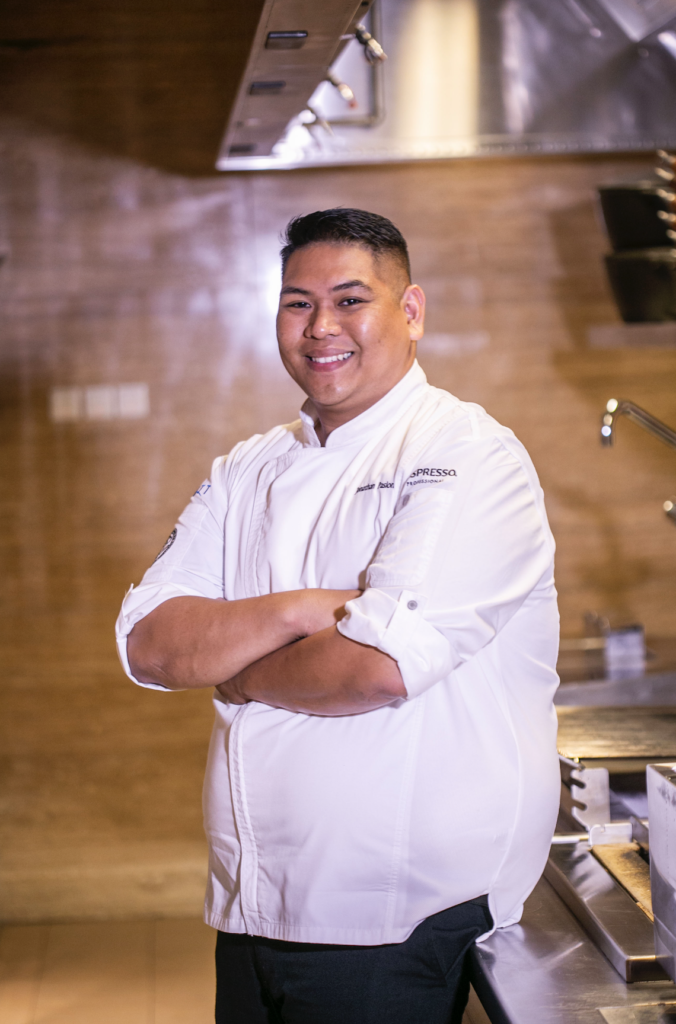 Argentina, Minelli has worked at various Hyatt hotels in Latin America and the 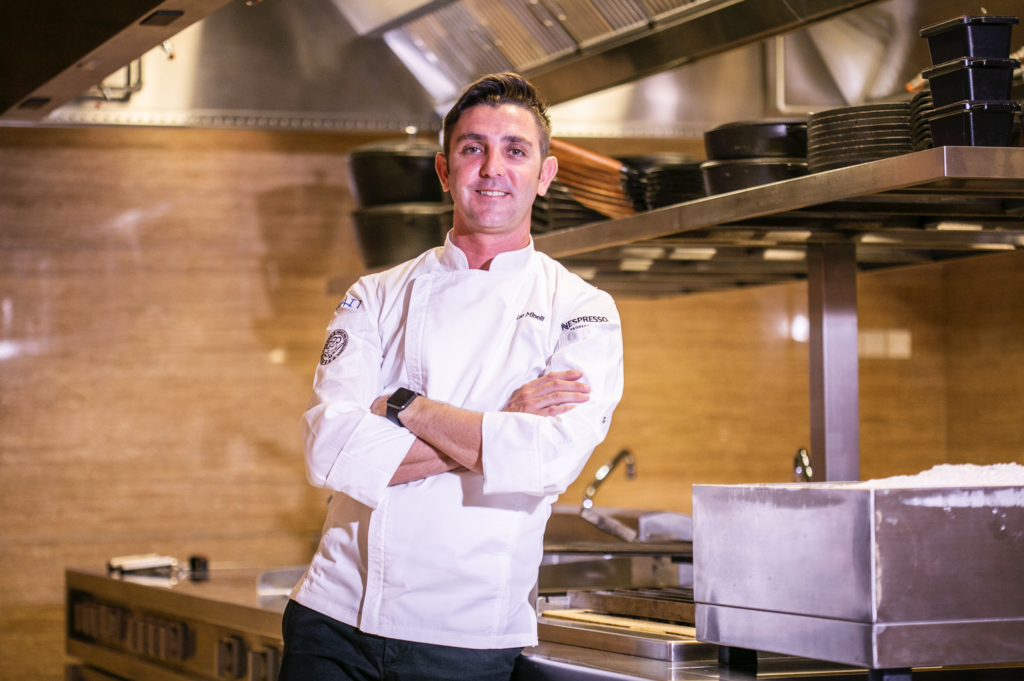 pastry organized by the Culinary Academy of France. 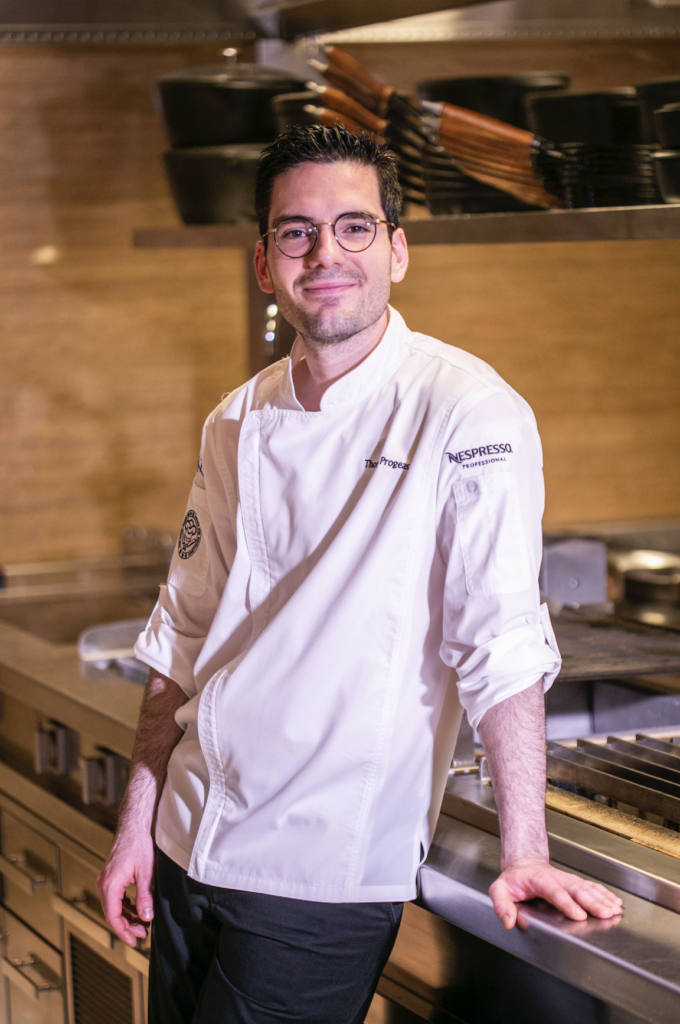 Lily Liu of Park Hyatt Hangzhou: The first woman chef to qualify for the

global final of The Good Taste Series, Liu triumphed over 121 other chefs in regional

competitions to represent mainland China in the ASPAC final. 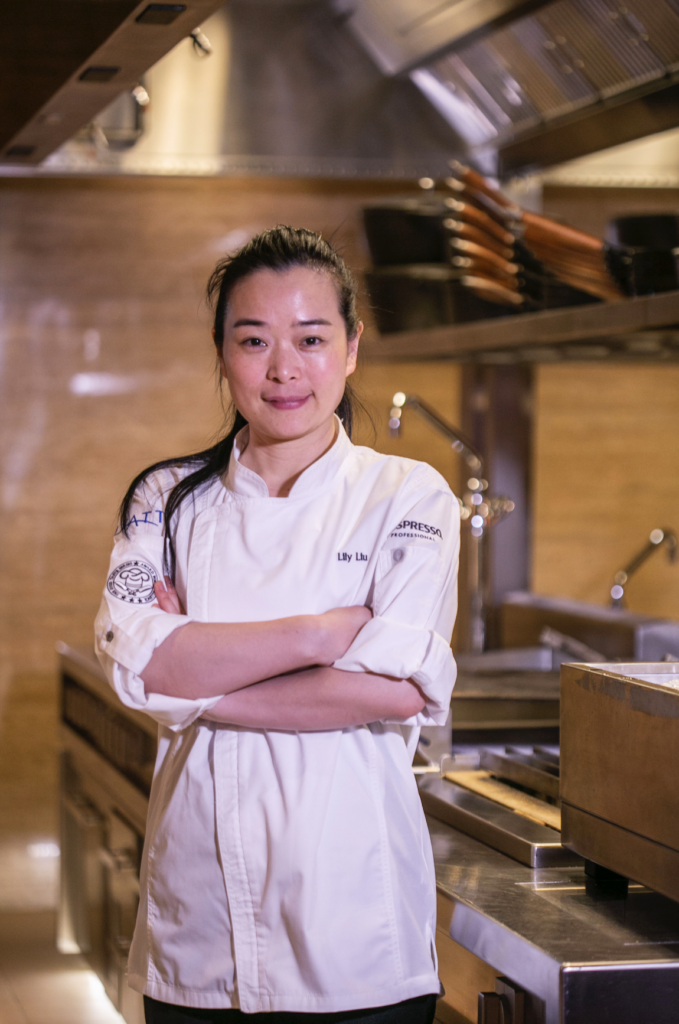 decided to pursue his dreams and graduated with a degree in culinary arts.

Oh has been at Grand Hyatt Seoul since 2005. 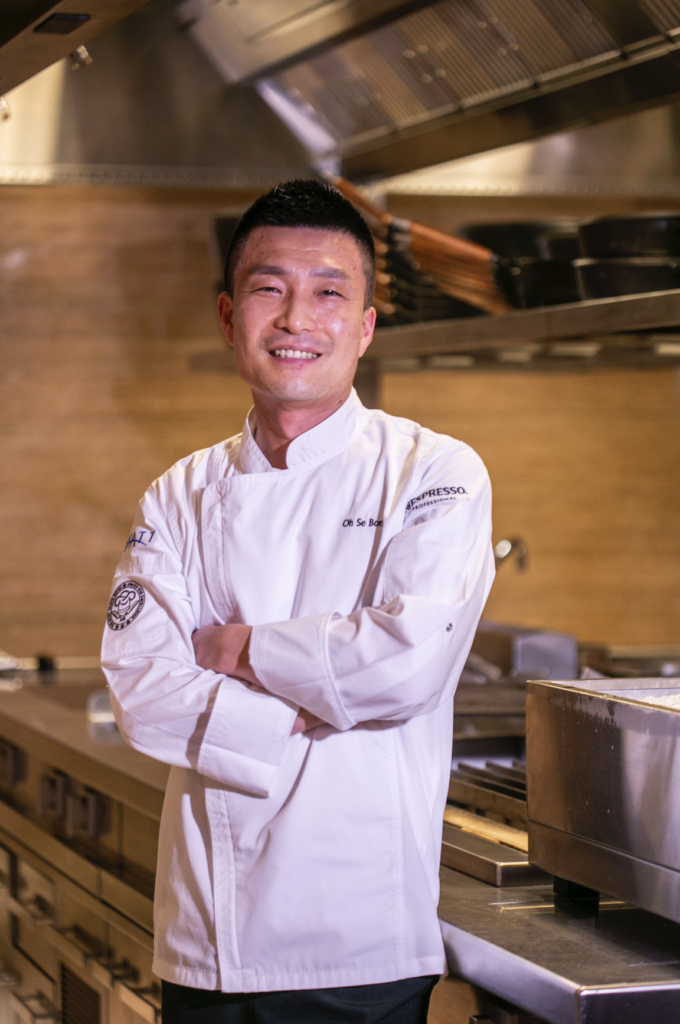 Schielke’s career with Hyatt started in 2006 and has brought him all over Europe, 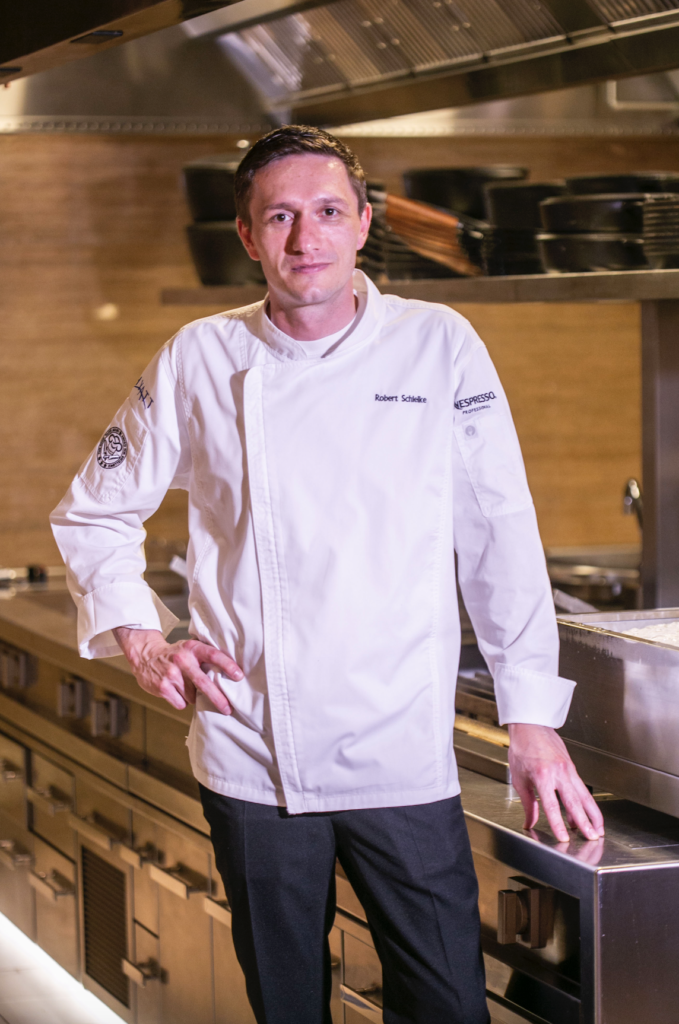