A fixture on the red carpet, Zoe Saldana is stylish and sexy, smart and successful—a woman of strength and substance both onscreen and in real life. 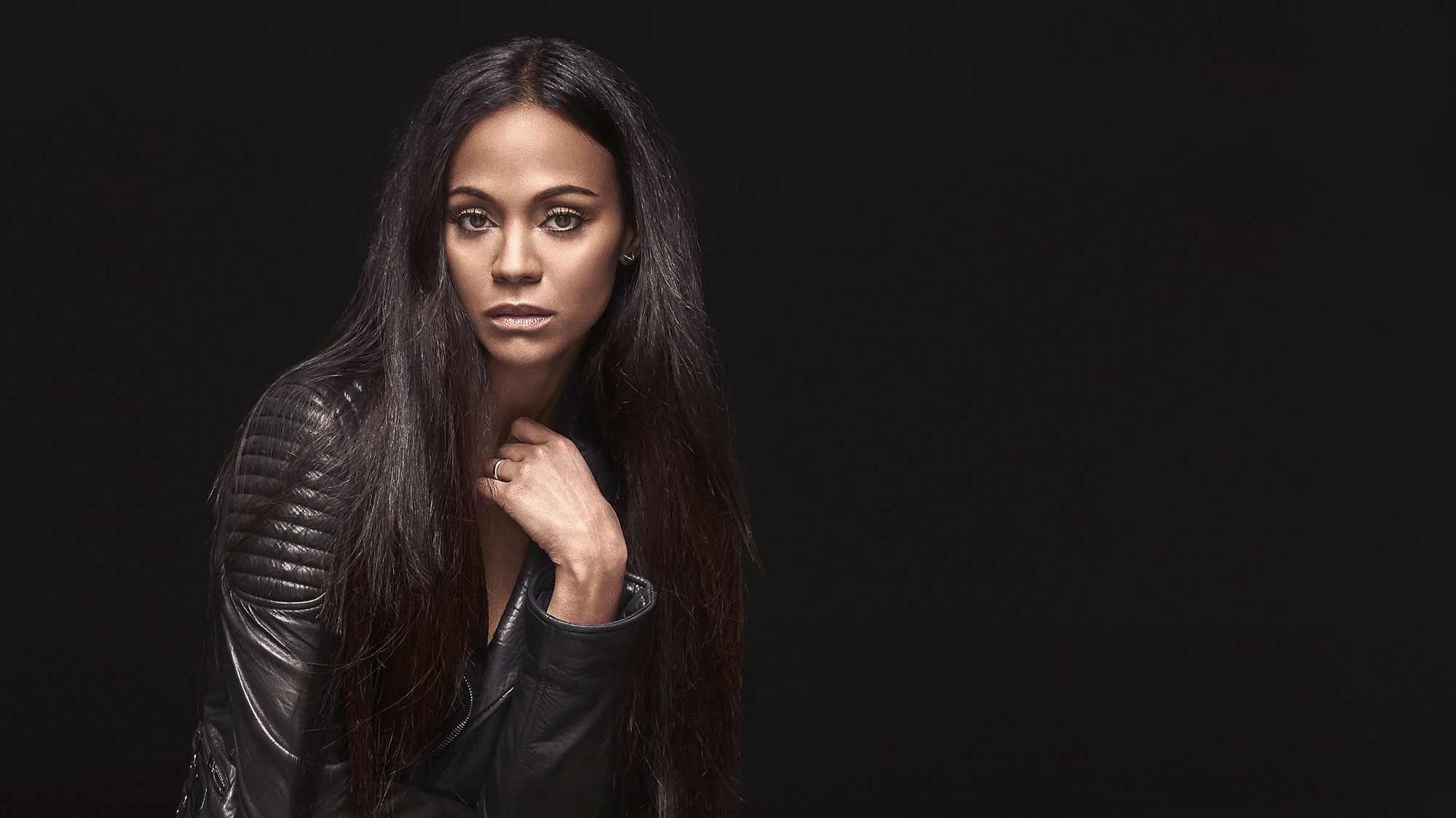 A fixture on the red carpet, Zoe Saldana (@zoesaldana) is stylish and sexy, smart and successful—a woman of strength and substance both onscreen and in real life.

Best known as a kick-ass action hero on intergalactic missions in the Avatar, Guardians of the Galaxy and Star Trek franchises, Zoe Saldana is not only an internationally acclaimed actress with a nearly 20-year career, but also a capable multitasker. Along with sisters Mariel and Cisely, she runs Cinestar Pictures, a production company (watch for The Honor List later this year). She is also preparing to launch a digital media brand and has become an outspoken supporter of the Time’s Up campaign to end sexual harassment. And above all, she is a loving wife and mother to three little boys who are being raised on a gluten- and dairy-free diet.

Aside from starring in I Kill Giants [release date: March 23], what else is new in your busy life?
Something pretty big! I’m stretching my wings and throwing myself into the world of entrepreneurship. I’m starting a [digital media] company called BESE, a platform that is going to shine light on the untold stories and faces of today’s America. We are going to start with the Latinx community, because it is the most marginalized according to size and growth. Our goal is to give a voice to underrepresented, marginalized communities, and to provide inspiration by highlighting role models past and present. Building BESE is my biggest passion right now, aside from my family and film career.

How would you describe your personal style?
I guess I choose my outfits based on what pieces will make me the happiest that day. My go-to outfit is jeans, little flat shoes, and a button-down shirt. I love when my hair looks amazing, my jeans feel comfortable, that button-down shirt isn’t pulling or tugging at me, and it’s all looking really sharp. Plus, my flat shoes look chic, but are comfortable. I love to accentuate my look with a beautiful purse and a red lipstick.

Has being a mom changed the way you dress?
Definitely. Before I had my kids, I would look at mothers and think, “How dare you go out like that? You should always make an effort. You should always, you know, work on yourself!” Little did I know how exhausted I was going to find myself! After pulling an all-nighter with one kid that has a 103-degree fever and then having to wake up and make breakfast and put them all in the car and take them to school… and then you stay with one little baby that’s too young and you’re doing activities with him… Little did I know that the last thing I would want to do is spend time on myself getting ready! I still manage to preserve a little bit of that old essence of who I was [before motherhood]. I think it’s important that you do make an effort and you do try to find “your version of pretty” every day, because it goes a long way. I like to look good and to feel good.

Despite the exhaustion, do you like being a mother?
Oh God, it’s the best role I will ever play in my life. I love being a mother. I love my children. I love my family. I’m in love with my husband and everyday I wake up trying to be a better person for them. I’m raising boys, so I have a huge responsibility on my shoulders to raise honorable and decent men. That is our main goal now.

Who are your style icons?
Jennifer Aniston has a beautiful, consistent, strong look. And Grace Jones. I like that she was a risk taker and that she still, to this day, owns her bod. Nobody tells her what to wear or how to wear it or how to cover up. Her skin is just beautiful and she is so proud to be who she is. She is one of the most striking women I’ve ever laid my eyes on. I also love Audrey Hepburn for being so elegant and delicate and sensitive.

How do you find a work-life balance?
I want last year to be the last of my crazy-ass years. I had a third baby, I was doing two films at a time in two different locations, and we moved. For me, this year is about sleeping. Now that our three children are sleep trained, it’s about catching up on that rest. Healthy living helps me to feel balanced. I would like to read one book that doesn’t involve teaching me how to raise my children. I would love to support my husband more in his art and in his field. Last year he was the wind beneath my wings, so this year it is about me being the wind beneath his. He very well deserves it and needs it. Finding that balance between working hard and playing hard is important. I find the “play” part by spending quality time with my family.

How do you find the time to squeeze in workouts?
I go through seasons where for six months I am a consistent exerciser and then three months go by and I don’t do much. I try to walk. I’m currently on a hiatus from exercise and beginning to feel it. I’m eager to start going to the gym, seeing my trainer and getting back on my disciplined regime. I’m happier when I do that.

What is it like running a production company with your sisters?
Since we were little girls, we always knew we wanted to be working together, living nearby and in each other’s lives consistently. I think we’ve managed to build a relationship that has a foundation of respect, admiration and positive criticism, and also focuses on pushing each other. We are super inspired every day and the stories that inspire one inspire the others. Currently, we have taken a little hiatus and are focusing more on family. We finished our first-look deals and we are expanding in the digital world for women and for film. That presents a certain kind of freedom; we don’t have to be stuck on a policy or a specific budget that is unrealistic. We can make a lot with a very small budget and tell the stories that we want. We executive produced The Honor List, and co-produced it with Lionsgate Digital Studios and Untitled. This is the first film that we did and we are super excited about it.

Would you encourage your sons to go into the entertainment business?
I will always encourage them and be on top of them to take their craft very seriously, and I will support them 100 percent. My goal right now is not to just teach them about the glamour of what I do, but to teach them the sacrifice of what I do. We are all making the sacrifice. They are in it with me. Every time I have to rip myself away from them for 16 hours a day, they are missing their mother, so I want them to be conscious of that and to know that this comes at a high price.

Have you ever had any #MeToo experiences?
I would be lying if I said that I am not part of the “Me too” movement. You can’t be a woman at my age and stature, and say “I’ve not been a victim of some kind of sexual misconduct.” The way I’ve handled it… I have leaned in to it. I have spoken to other women, especially my mother. I’ve spoken to female peers. I’ve spoken to male peers about situations that I’ve found myself in, [some that] happened before and I didn’t have the strength to speak up [back] then. I’ve been given tools on how I can handle myself better next time. And also, I have spoken up. Whenever I was cornered in a way that felt like I was going to be coerced into doing something that I did not want to do, or I was beginning to feel dirty or pressured, I have stalled. I’ve said “Halt!” And I have told those perpetrators to stop immediately and to step away. I’ve also told friends that I love very dearly when they have gotten drunk around me and been inappropriate. The next day, they [received] really heavy text messages from my end where my heart was broken, but I was conveying how they made me feel and how I would like them to never, ever, ever do that to me again. I think I have been weak at times because I didn’t know what to do and was trying to be nice, but I’ve also been that strong woman and said “Do not trespass me, or I will hurt you.”

You are attached to Avatar 2 through 5… how exciting!
It makes me feel great that I am a part of the biggest film in the world and that its message is super strong and connects life with earth. I am working with the biggest renegade in the business, who has made it his life’s work to be an advocate for Mother Earth. I love James Cameron. I think he’s a genius. I think he’s an inventor and a deliverer of essential messages of life. He’s also very inspiring to work with. He’s like a father, my peer, my friend. Because of him, I’m working with my idol, Sigourney Weaver—my dream woman since I was a little girl. She played the roles that made me dream about the kind of woman that I wanted to be. I find myself 30 years later living out those dreams. I also get to work again with Sam Worthington, who has been the loveliest and most amazing man on screen that I have ever worked with. Now we are both parents and we are older and we get to high five and thank our lucky stars together. That feels so great. I’m aging with my favorite people. I’m growing with them. Many actors, many people in this town, don’t have that luxury, so I don’t take it lightly. I am grateful every single day.

Have your kids seen Avatar?
No, my twins are three and my youngest is one. We are still curating the kind of content that they consume, but I can’t wait to share it with them when they’re able to understand it. But they know that mommy goes to work and she’s in Avatar and she’s blue.

Do you have advice for aspiring actresses?
Reach out to other women. Don’t be preoccupied with the minutiae of life—Who is skinner? Bigger? Greater? Darker? Lighter? Just become sisters.

What would people be surprised to learn about you?
When the cameras are not on, I’m really funny. Whether I have had a glass of wine or not, I’m goofy. I’m kooky and goofy! Sometimes to the point where I can make people feel really uncomfortable around me because I am socially awkward whenever I’m just super free.

What terrifies you?
To drop the ball and miss important moments in my kids’ lives that I may take for granted. I won’t ever be able to get that back. That sometimes wakes me up at night.

Actress Jane Levy feels a song, or two, coming on...