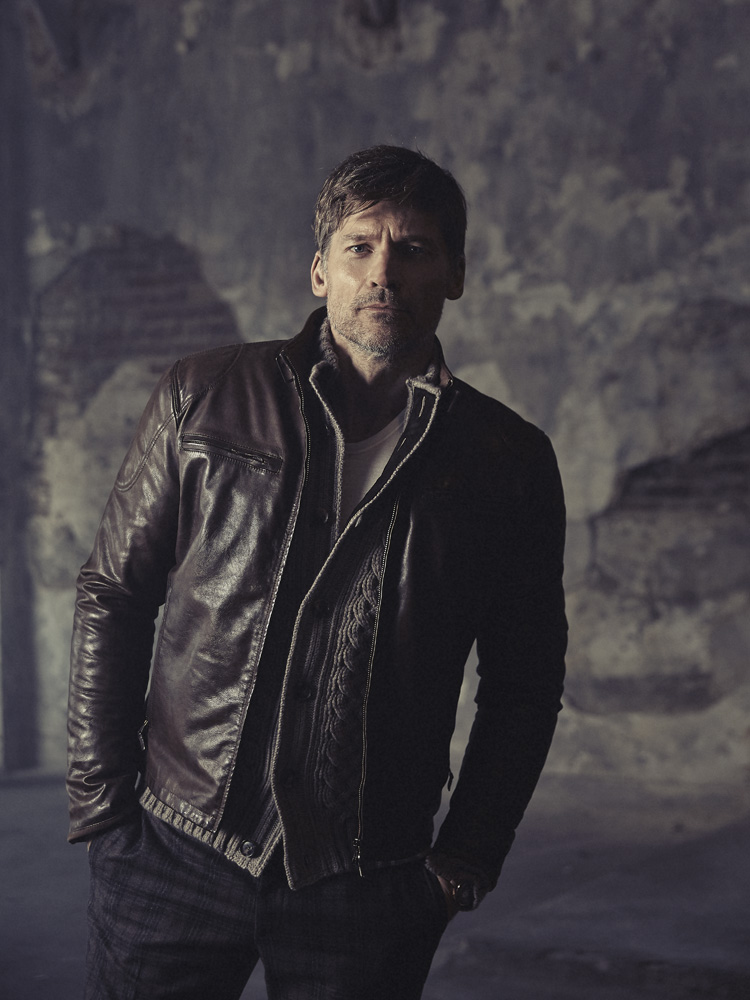 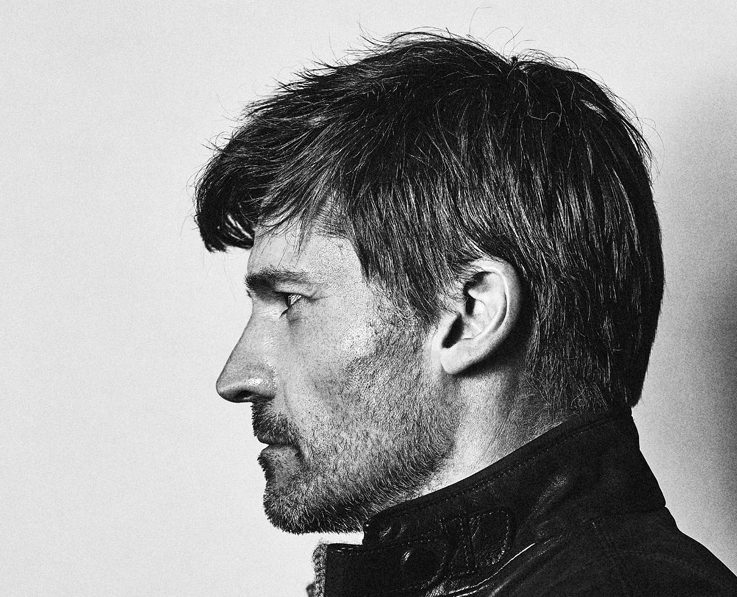 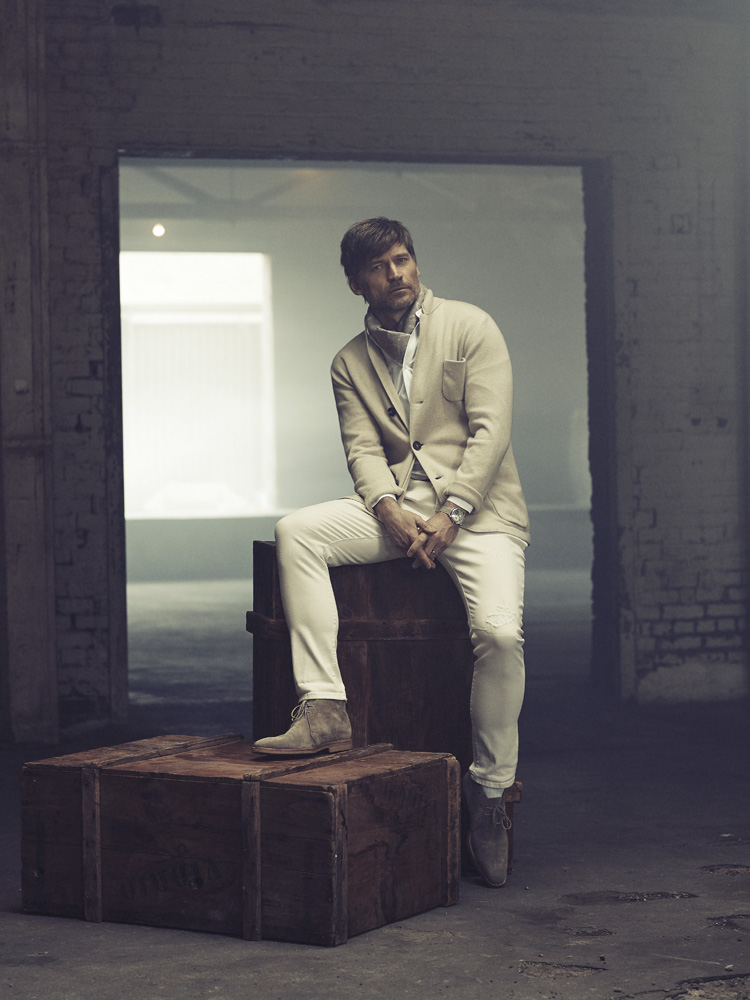 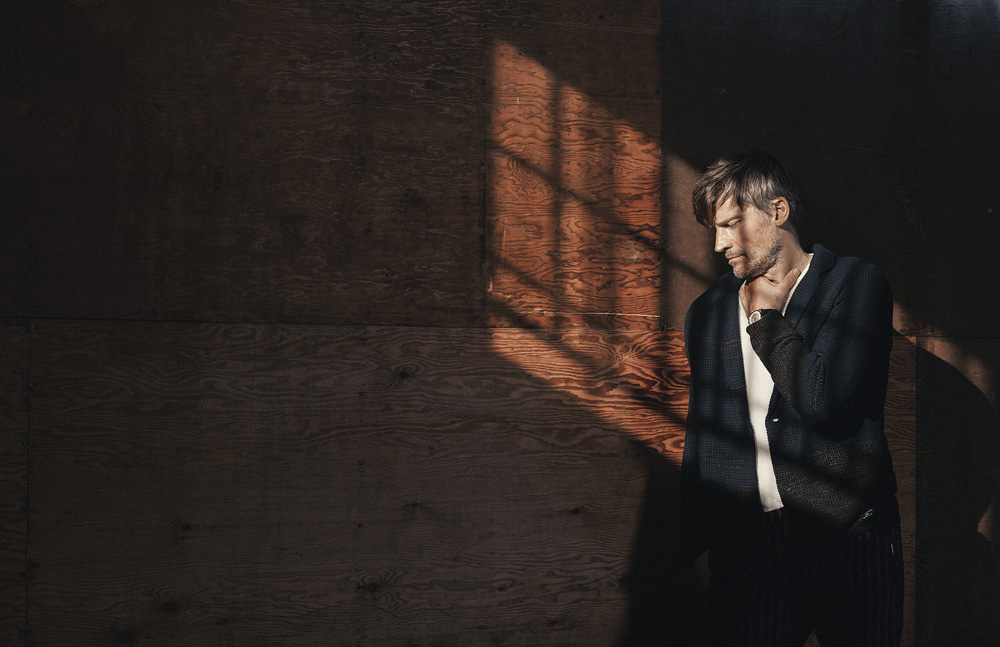 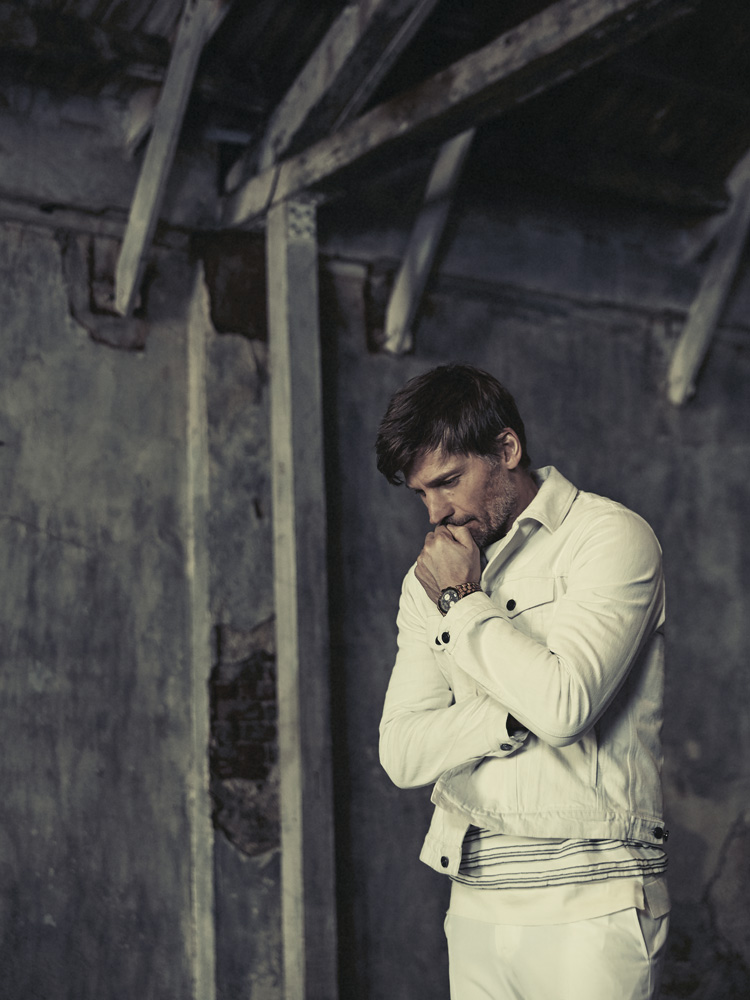 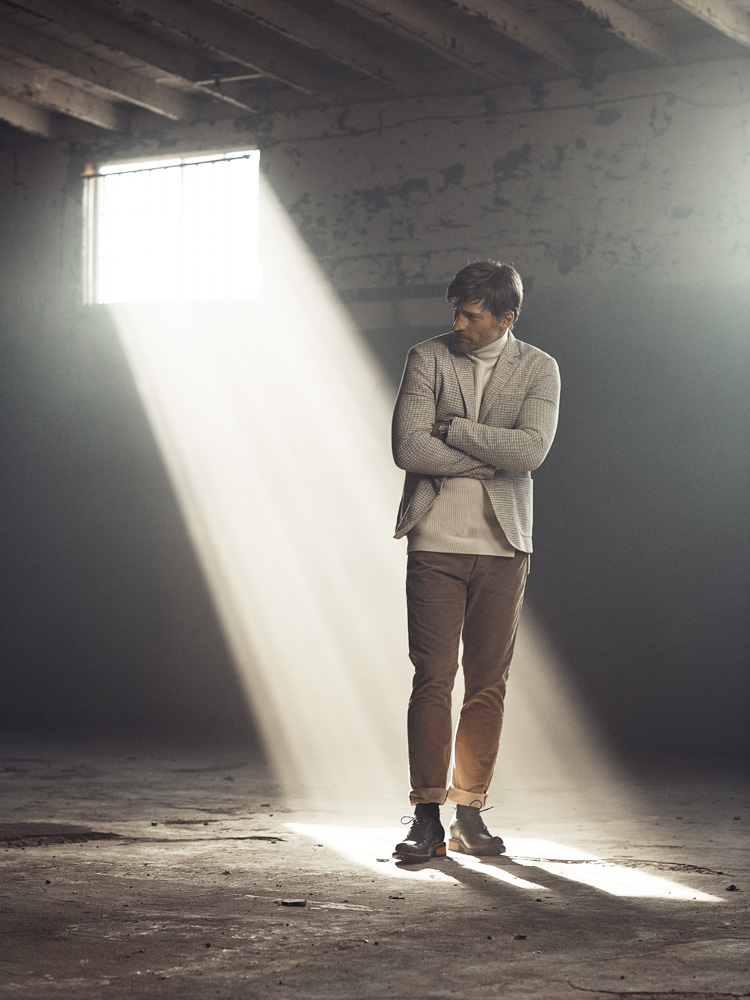 Armor-clad and dangerous in HBO’s megahit original series Game of Thrones, Nikolaj Coster-Waldau killed the “Mad King” Aerys Targaryen, lost the hand he fenced with and reached international fame as incestuous warrior Jaime Lannister. Now that the show’s final season has wrapped, the hunk from Rudkøbing, Denmark is making his magnificent presence known as the global spokesperson for L’Oréal Paris’ Men Expert line of skincare products. He’s also using his platform to support humanitarian efforts. As a Goodwill Ambassador for the United Nations Development Programme, he’s raising awareness of the organization’s global goals to end poverty, fight inequality and stop climate change, and advocating for wildlife conservation and animal welfare. Coster-Waldau would like to thank the legion of fanatic Game of Thrones watchers for their years of loyalty. Just don’t ask him what happens in the last episode.

Jacket and pants by Isaia, top by Cos, Watch by F.P. Journe, shoes by Pskaufman

How did you land the role of Jaime Lannister on Game of Thrones?

That was 10 years ago. I met with the two creators. They had seen something that I was in and they considered me for the role. Then I did a scene a couple of weeks later and that was it. 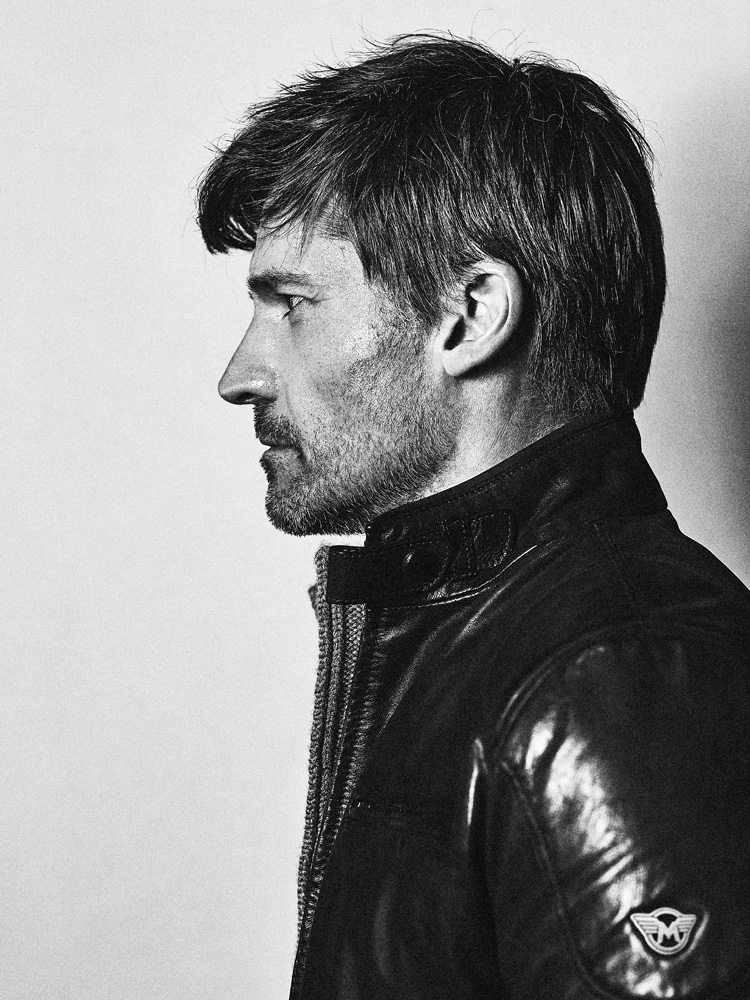 How did you prepare for the role, particularly all that sword wielding?

That’s just a physical regimen. You do a lot of work with the stunts team and the swords master. At the time, I had done sword training before, so it wasn’t all new to me. That’s the least of it. The real work, the most difficult part, is about developing the character. Getting to grips with who he is, why he acts the way he acts. The physical part I just think is fun. I really enjoy it.

Do you have a workout regimen?

Not regimen. I try to keep fit. I just did [another role] where I had to be pretty slobby looking, and so I did not work out, but that’s just another thing you have to do for a role. And sometimes you just don’t feel like going to the gym, but you have to get rid of the guilt. But then again, I am pretty good about going the next day. Also, I enjoy being active, such as being outdoors.

Jacket and pants by Brunello Cucinelli, shirt by Cos, scarf by Sebastian Cruz Couture, shoes by To Boot New York, watch by F.P. Journe

Did you have any idea that Game of Thrones would be such a huge success?

No, no, I don’t think anyone saw that coming. I think at best we would find an audience and hopefully live a few seasons, but we never saw this coming. Because back then it was a show that featured supernatural things, dragons and weird stuff happening. No show before that had any kind of mass success, no television show, on this type of level. So I think everyone knew there was an audience there, but then it went on to cross over. Everyone fell in love with it. It is just such a wonderful surprise.

Leather jacket by Matchless, cardigan sweater and pants by Isaia

How does it feel to see your face everywhere—on figurines, T-shirts, Funko Pop figures? Kind of surreal?

Yeah, yeah. In my basement I have a few and I gave one to my mom. She thought it was hilarious. Yeah, it is pretty surreal.

How did production keep such a tight lid on the way the show ends?

It’s taken on a whole different level of security, and the extent they went to keep people out. From drones to the scripts, [which we read] electronically; once we were done, they self-destructed, vanished. You couldn’t print it. And on the call sheets no one had their real names, they were all code names. It was ridiculous. But at the same time, people wanted to, for some reason, find out and get the scoop about what happens next. Even if I told you exactly what happens, people wouldn’t believe or they’d go, “Yeah, it’s just made up,” because there are so many theories out there. A few of them hit the mark, but I can’t tell you which ones.

Did the elaborate costumes help to define your character?

They were very important because that’s what you see. You see someone wearing armor. It’s an aggressive look, it’s a warrior look. And in other scenes when I was a captive, it also informed the character on how he feels and what he’s doing. [Emmy-winning costume designer Michele Clapton] is very talented. The attention to detail is mind boggling. When you look at the scale of things, everything is made original for the thousands of extras and, of course, cast. It’s all part of telling the story and she does it so well. The armory was a massive shop. They come up with all these ideas, historical drawings…and all this helps the actor tell the story of that character.

What about the armor?

The one I had was brass and it was crazy heavy. I had to have two people help me get it on.

And the false hand?

It’s basically like a metal glove, which they molded after my hand.

On the show, your attire is quite regal. In real life, how would you define your personal style?

Do you have any favorite designers?

I really don’t. There are clothes I get to wear on the carpet from great designers and they are so beautiful. But I don’t have one in particular. There are so many that are brilliant and I admire the craftsmanship. I don’t spend too much time thinking about [fashion] when I am at home. I usually grab what’s on the top in the drawer or pile of clean laundry and I put that on.

What is your personal grooming routine?

I don’t have many grooming habits. However, I do try and stay clean. I shower, wash my hair and the only thing I really do is moisturize. That’s the secret, use good moisturizer. Oh, and keep your nails clean.

Why did you get involved with the United Nations Development Programme?

They are so inspiring to me, what they do all over the world [in 170 countries and territories]. They came to me and asked me for my help raising awareness. Of course I said yes to whatever I can do to bring attention to this cause.

An Australian ad agency came up with idea. Basically, they do advertising campaigns for huge companies and 25 percent of these campaigns feature animals. When these advertisers run campaigns with humans or music, they have to pay a fee. But you don’t have to pay an animal to be in the commercial; obviously they can’t ask for it. The idea is to give 0.5 percent of the ad spend to The Lion’s Share Fund, then use this money to really try to help endangered species, create habitats for these animals and just really make a difference.

You’re in the upcoming crime/thriller Domino, directed by Brian de Palma. How was that experience?

It was a great experience working with Brian. He’s knowledgeable and he calls upon the history of cinema when he does a shot. I really admire the man and to come and do this crazy project in Europe was a wonderful surprise.

Clean the basement. We’ve lived in our house for 13 years and there are still boxes we haven’t gone through.

Old Nirvana, Rhianna and, when I fall asleep, ocean sounds are so soothing.

I [sang] karaoke once. Back then, I think it was “You Can’t Always Get What You Want.”

All aboard for Cashmere

With the fall season upon us, there is no better time to add key essential Naked Cashmere pieces to your wardrobe.