Welcome to the newly renovated Hotel Figueroa, a hip DTLA destination with a most important herstory. 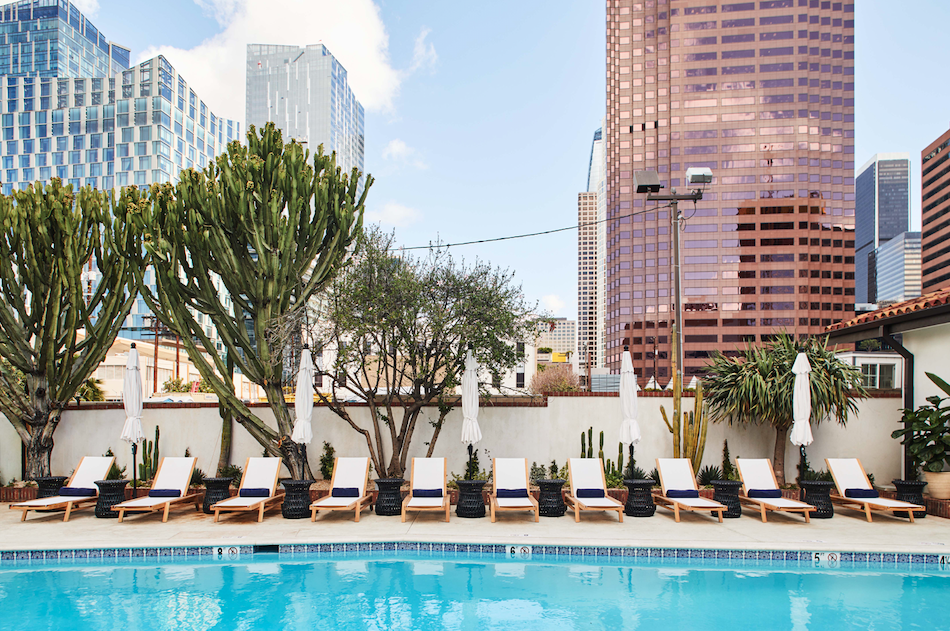 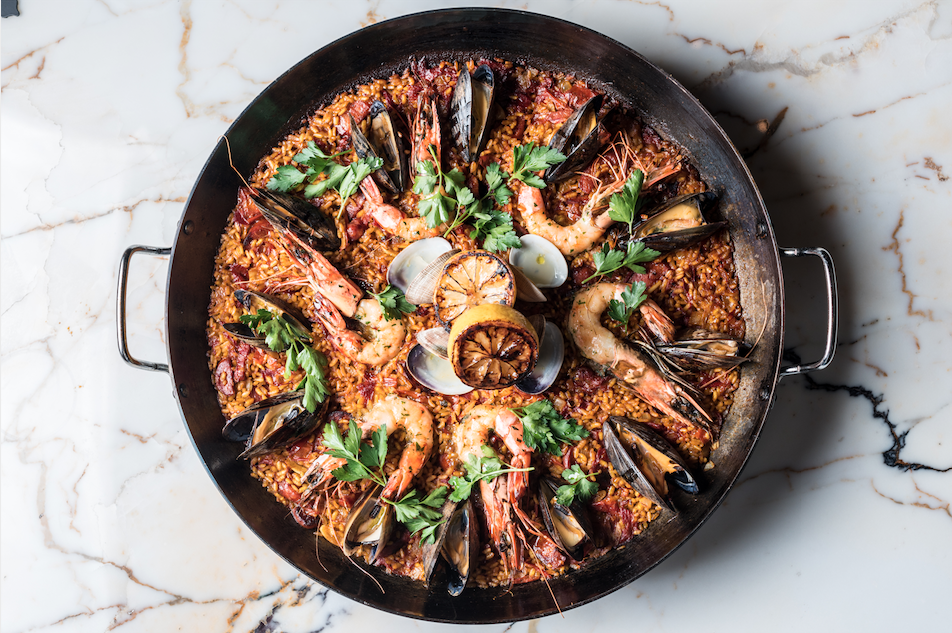 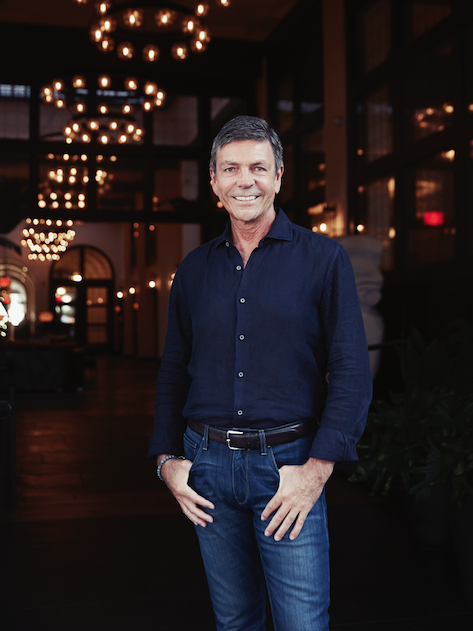 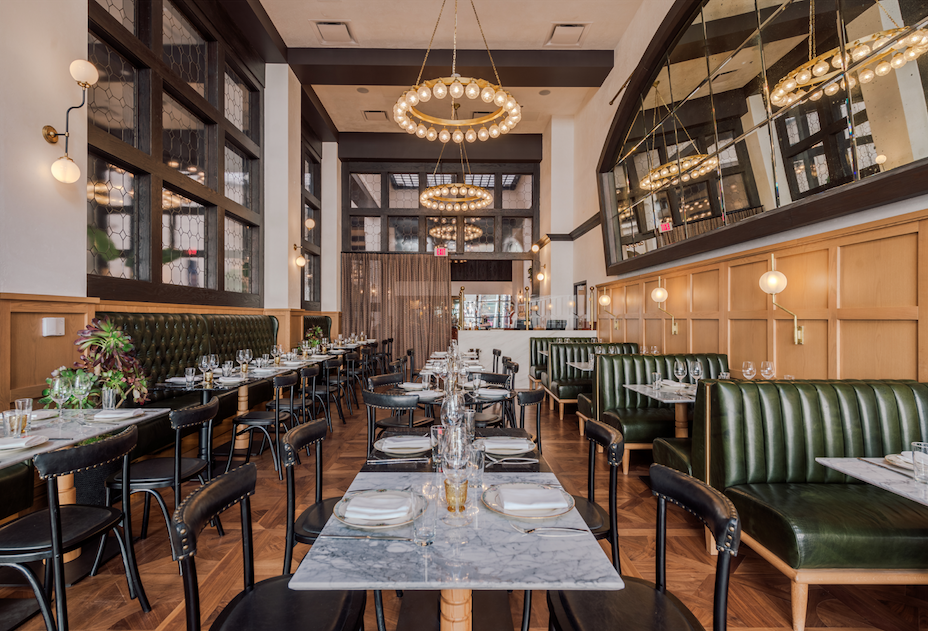 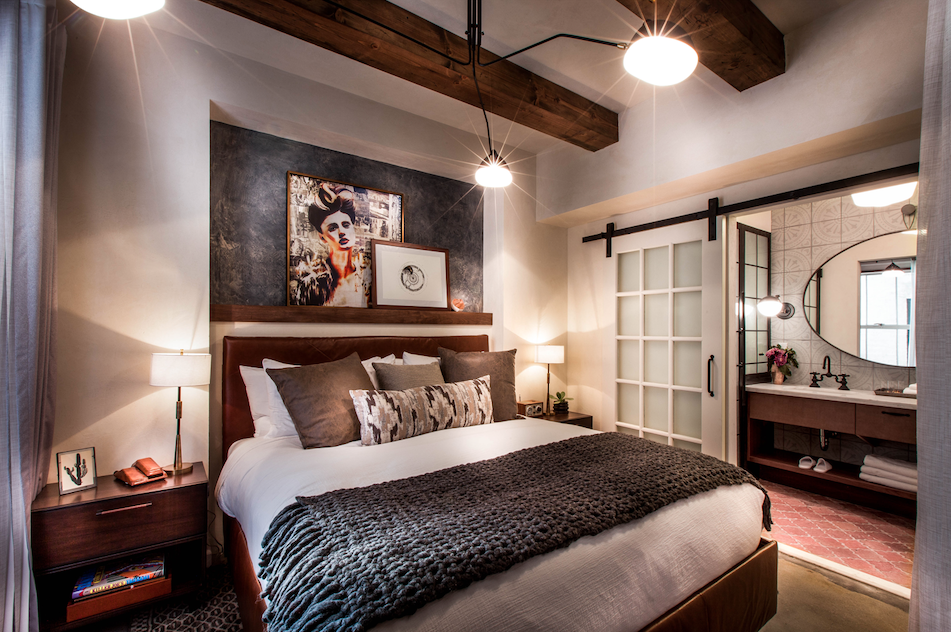 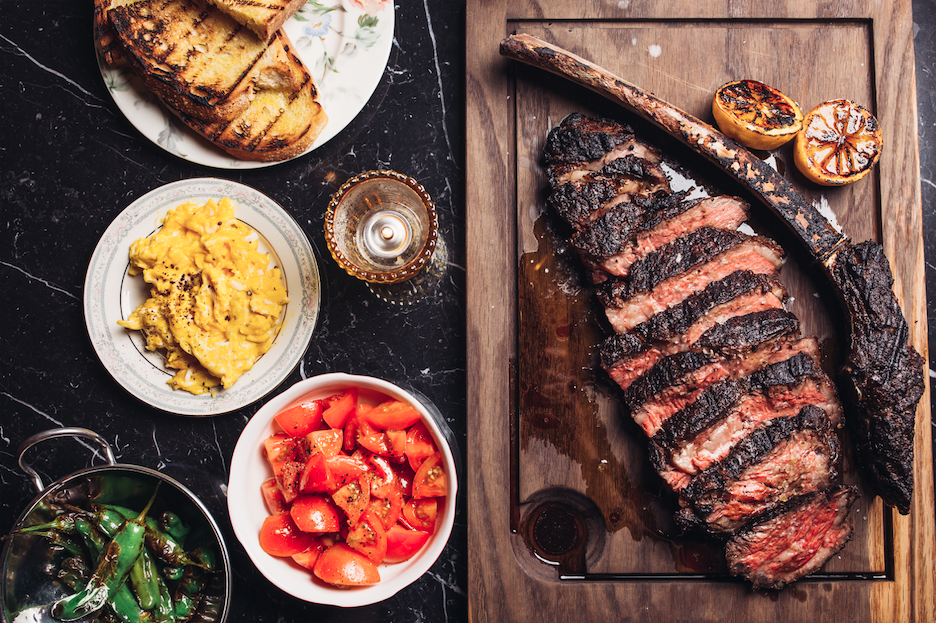 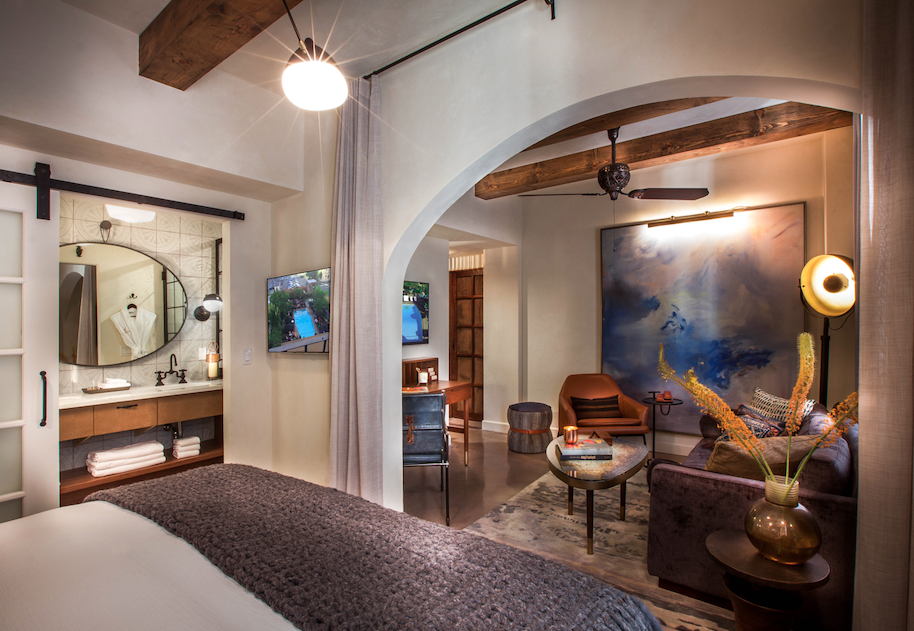 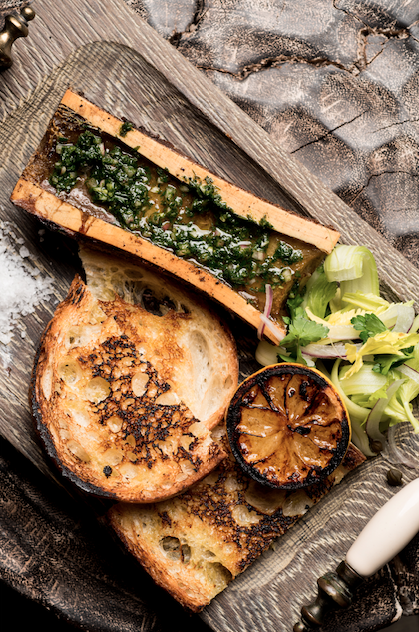 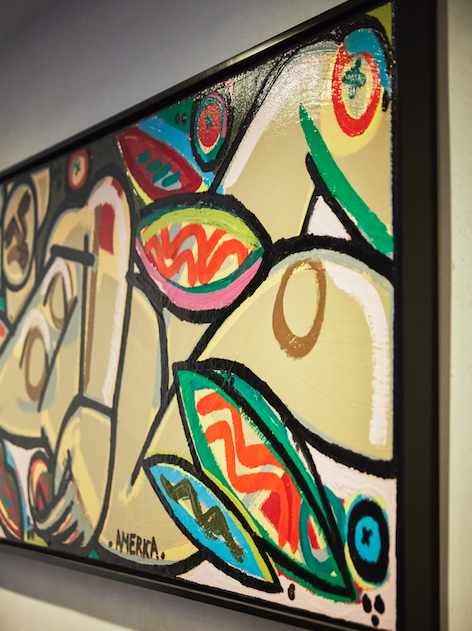 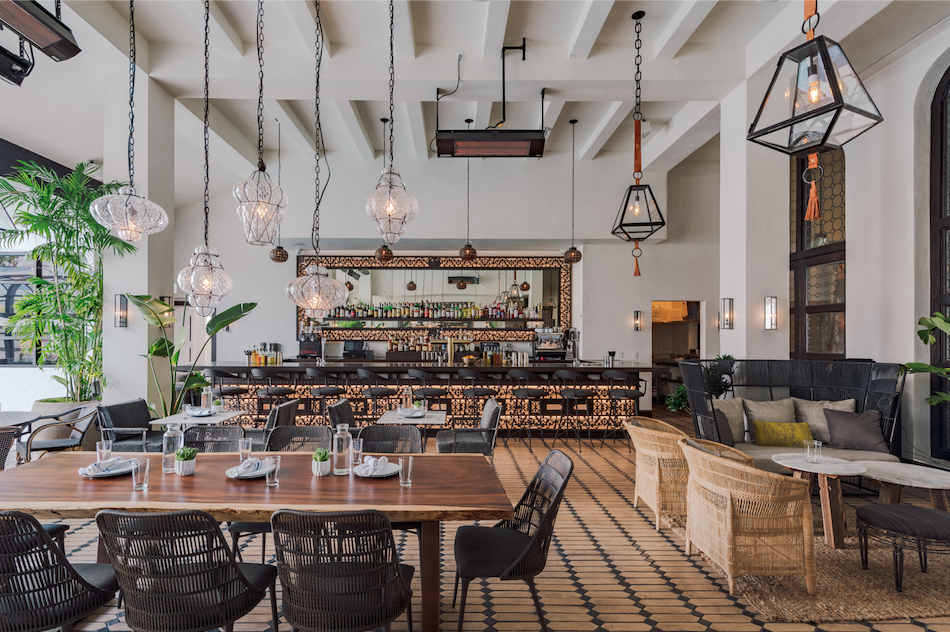 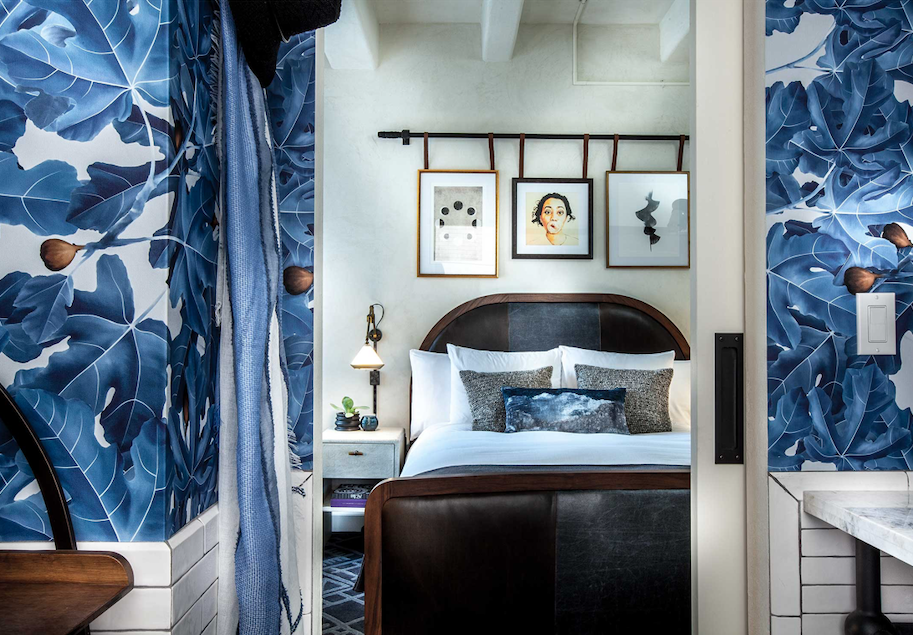 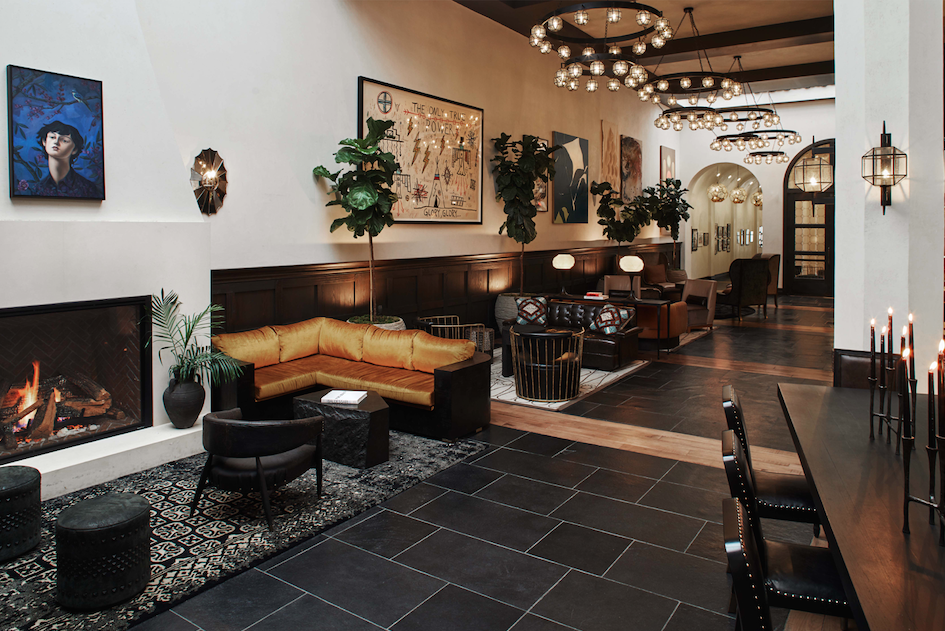 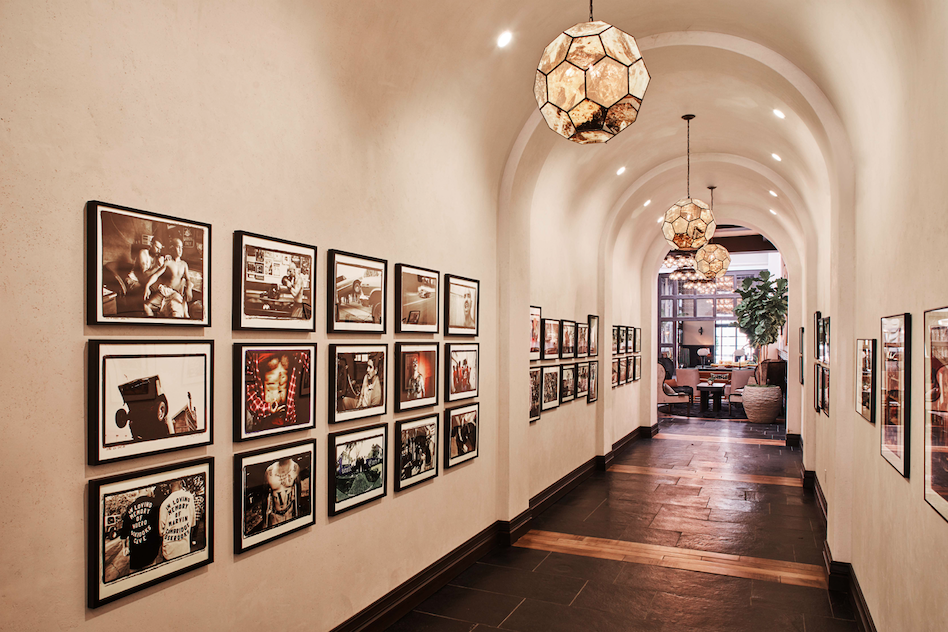 Attracted to its prime location in downtown L.A., real estate investor/developer Brad Hall and partners purchased a 14-story Spanish colonial property in 2013. Through vintage photographs, newspaper clippings and research conducted by a social anthropologist, he soon discovered the building actually occupies an extremely colorful place in women’s history. In 1926, it was founded by 11 forward-thinking women as a YWCA—an elegant home away from home for female travelers, as well as a hub for the exchange of feminist ideas and female empowerment.

“We’re a steward of this place,” says Hall, joint owner—along with GreenOak Real Estate and brothers Jack and Mark van Hartesvelt—of Hotel Figueroa, which recently reopened in the landmark building after a two-year, multimillion-dollar rejuvenation. “We have a great opportunity to create its rebirth, as well as an obligation to tribute its history and the original women who built it.” The property, now a member of the prestigious Leading Hotels of the World, deftly marries the past with the luxurious present. “This has become pretty much a project of passion for me,” notes Hall.

Tell me about the hotel’s beginnings.

The owner was a family trust, which loaned the women of the YWCA the money to build the hotel. Construction started in September of 1925 and it was completed in August of 1926. Unfortunately, the stock market crashed [in 1929] and the women ended up losing the property. The family took back ownership but insisted that the women continue to operate it as a YWCA.

There were a number of firsts here. This was the first hotel of this size (originally with 409 rooms) that was built by women. It was the largest investment by women in the United States at the time, a whopping $1.25 million, with another $250,000 dollars spent on furnishings. This was also the first hotel to be managed by a woman, Maude Bouldin. She was a woman of big personality, a real firecracker. She flew airplanes from the East Coast to the West Coast. She rode motorcycles. And she liked to race motorcars against men, because she knew she could beat them. Alison Van Pelt did the painting of Maude [at the hotel’s entrance] with such precision that many people think it’s a photo.

When the hotel opened [in the 1920s], it became a mecca of artistic and social energy. The space was designed in a way that empowered women. It was built so that they could conduct business and social meetings. The women were very progressive and courageous. They would host political debates. They would gather to discuss and debate sexism, racism and other social justice issues. They also were big supporters of the art community here in Los Angeles. They hosted salons for artists and musicians.

How do you incorporate art into Hotel Figueroa today?

The art program was put together as a way to pay tribute to the women who built this hotel, to what they were trying to accomplish—giving women a platform for their art. For our rooms, we probably met with and viewed the art of over 50 L.A.-based artists, with help from Tiffiny Lendrum, our art consultant. Our Artist-in-Residence program also supports the art community; we have a suite that artists live and work in for 90 days, and we display their art. Seulgi Burns, our director of experience, comes from an artistic background and experience at Chateau Marmont. Due to her relationships, we’ve had such an outpouring of well-established and sought-after artists who want to do a residency here. Our first artist was Estevan Oriol, recognized as one of the world’s top street photographers. We were very fortunate and happy to have him.

Who was on your design team for the renovation?

The architect is Rocky Rockefeller of Rockefeller Kempel Architects. Rocky specializes in historic buildings. Our interior design was done by Studio Collective out of Santa Monica. Shangri-La Construction was our general contractor.

Can you describe the redesign?

It’s kind of like this: Today, in the music scene, you’re seeing songs from the ’60s or ’70s remixed by a new, talented artist. With the hotel, we wanted to follow the same concept, taking the original, the look and feel of it, and mixing it with the aesthetics of today. We’re not doing a historic renovation, but the hotel today is very similar to what it originally was. We did plaster on the walls again and painted them close to the original colors, to get the authentic feel. We used wood and custom millwork close to what we saw in the original hotel. The updated furnishings give the hotel a more modern look. When we bought the hotel, there were about 288 rooms, and we reduced that [to 268] so that we could combine some of the very small hotel rooms into larger rooms as well as a variety of individualized suites.

What’s the signficance of the emblem above the iconic fireplace?

We found this emblem throughout the hotel, basically an inverted triangle. It was above the doorways when you walked in, on the fireplace in the Grand Ballroom and in a couple of other locations on the exterior of the building. We found that it was part of the YWCA, an emblem of female strength. We worked very diligently to preserve all of those original emblems.

What are you hoping to achieve with your restaurants?

The vast majority of travelers who stay at a boutique hotel look for a unique local experience. Do you ask the concierge, “Where do all the tourists go?” No, you ask, “Where do the locals go?” We want the food and beverage program [a collection of six restaurants and bars] and our public spaces to be as much a reflection of the neighborhood as possible, a true downtown L.A. experience. Casey Lane, our chef, is a four-time James Beard nominated chef. Our cocktail program is led by Dushan Zaric. We’re going to be rolling out a program which will provide a very high-end cocktail experience. We’ve got some very high-quality and rare spirits and liquor; the bartender and the mixologist will talk with guests about what they like and don’t like and create a cocktail based on that.

What’s next for you?

This gave me the bug for the hotel and hospitality business. I’m exploring the idea of urban camping, very high-end, rooftop within the city. Also, I think in Wine Country there’s a need for higher-quality boutique hotel experiences that combine not only the wine with the food, but also with a cocktail program. I’m seeking some more projects like this.

Virginia Beach is full of surprises.