Best known as the exotic face of top fashion brands, Elisa Sednaoui Dellal is most passionate about her namesake foundation. 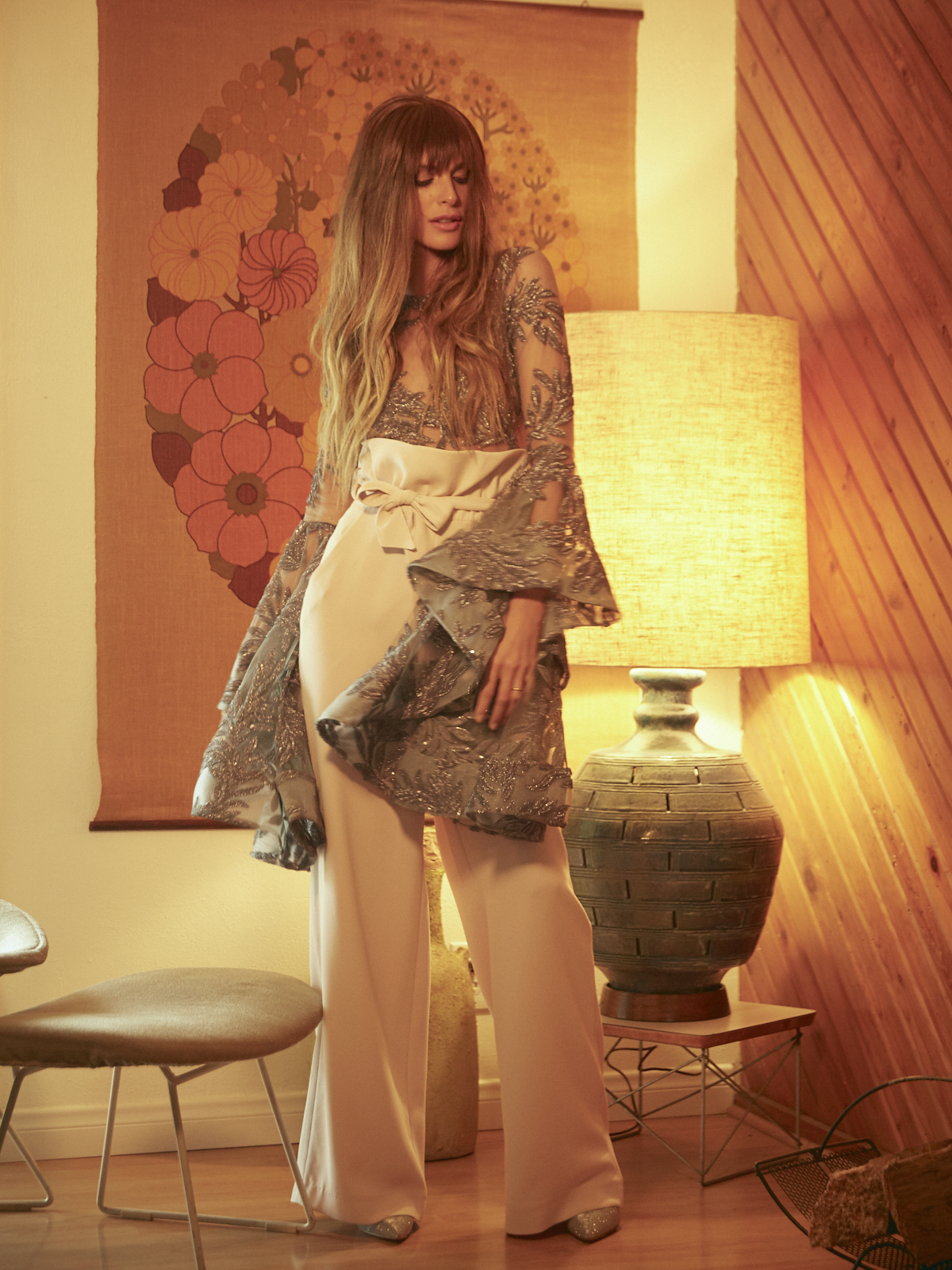 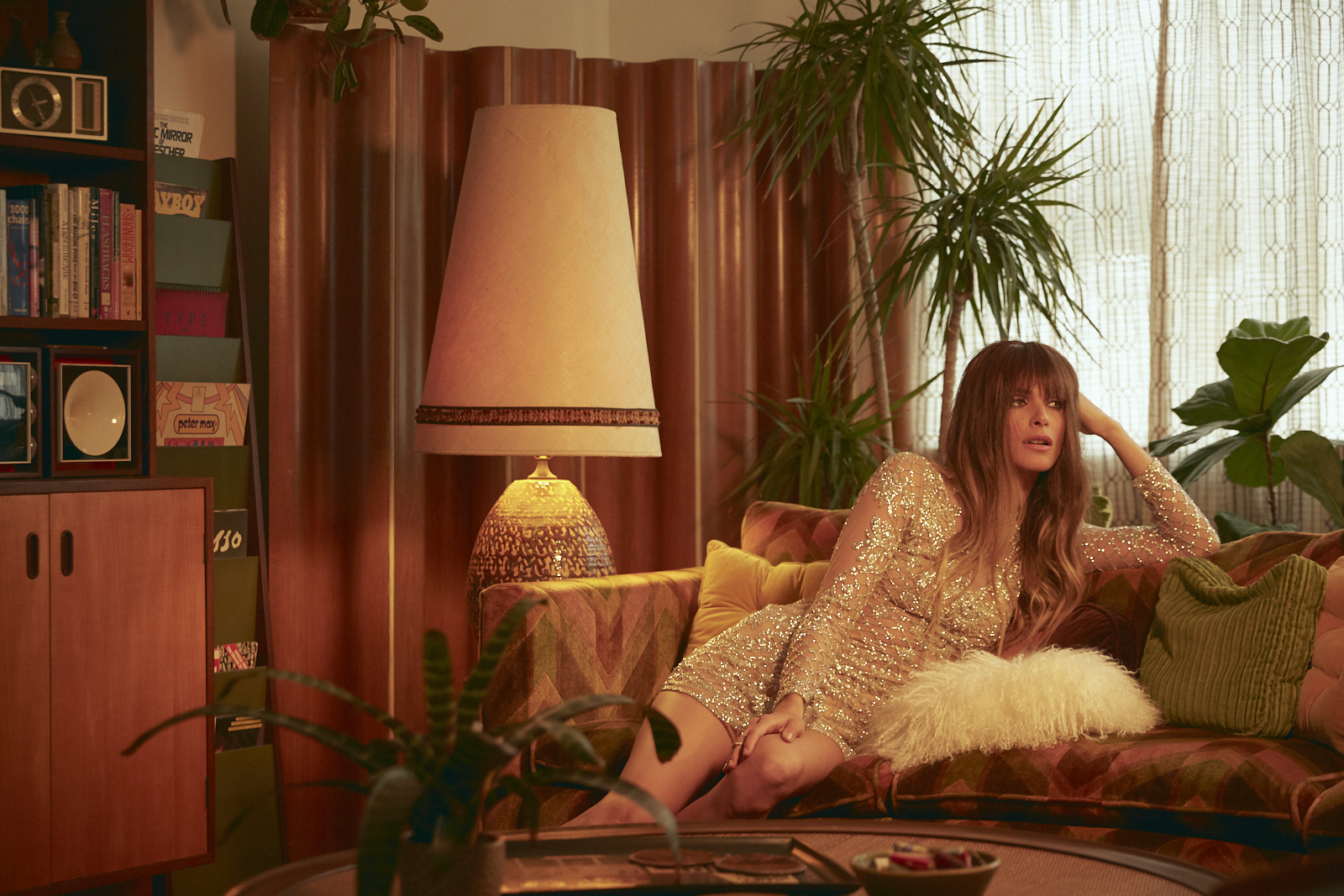 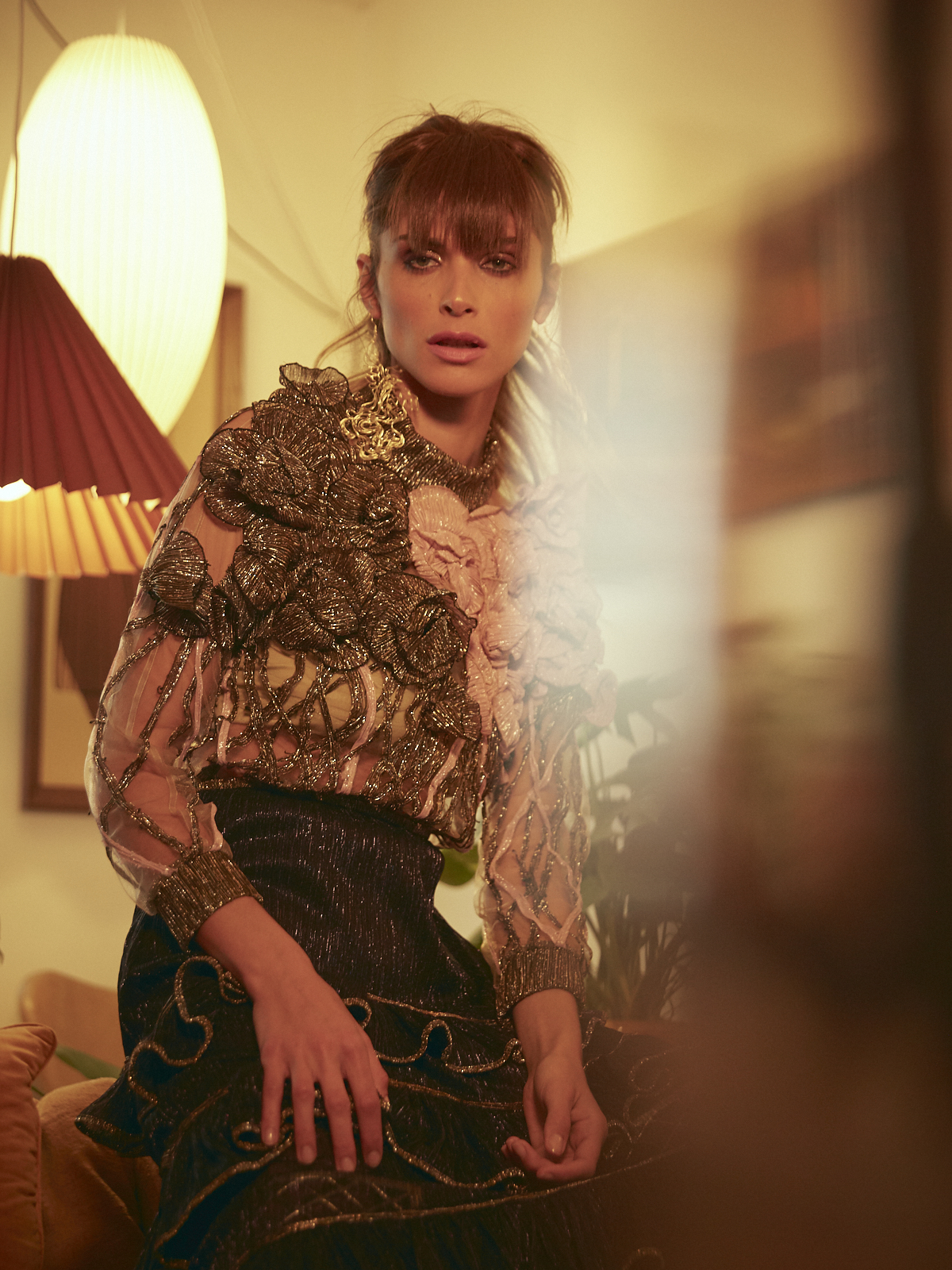 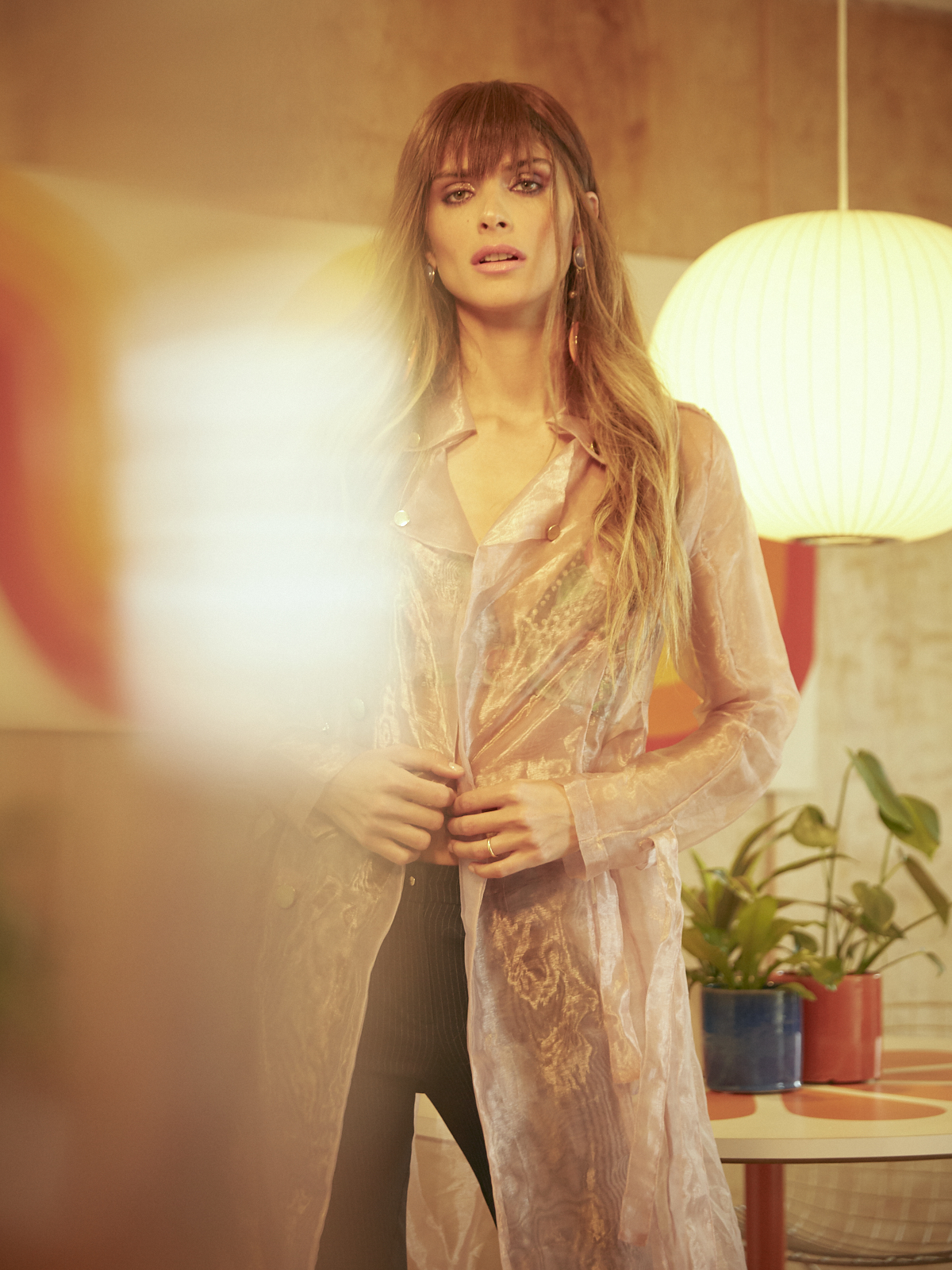 “I have a wide sense of belonging,” says model, actress and social entrepreneur Elisa Sednaoui Dellal, referring to her Egyptian, French, Italian and Syrian roots. The multicultural beauty has graced magazine covers and ad campaigns for Chanel, Armani, Roberto Cavalli, Buccellati and Missoni; appeared in French and Italian films; and directed a documentary film, as well as a short video for Vogue Arabia’s online launch. Along the way, she married British entrepreneur Alexander Dellal and gave birth to two boys, Jack and Samuel.

Driven by a desire to lead a life of purpose, in 2013 Sednaoui launched the Elisa Sednaoui Foundation (elisasednaoui.org) and its first project, Funtasia, an innovative educational program designed to empower children through after-school classes and creative workshops that promote artistic expression, problem- solving and life skills. With a permanent home in Luxor, Egypt, Funtasia also conducts programs in Italy, and plans are in place to replicate its model across the Middle East, North Africa, Europe and the rest of the world. Supporters and partners include Christian Louboutin, Diane von Furstenberg, Save the Children Italy and the Burberry Foundation.

What motivated you to launch ESF?

From a young age, a need for economic independence led me to modeling and acting, but I always dreamed of dedicating myself to something that combined the social and the cultural. Five years ago, while shooting a documentary in Egypt, I had an awakening. One August afternoon, with temperatures over 125 degrees Fahrenheit, we ended up in a school run by volunteers. Funtasia was born in my dreams that day. The journey to name and shape that dream led me to visit grassroots organizations in Egypt. I realized I’d have to create a new organization versus just working as an ambassador. We all know that access to quality education isn’t equally available. It’s still a rare occurrence to find education that not only teaches academic content and specific skills, but also supports young people in teaching them to find creative life solutions and to realize their full potential. I believe the world needs this type of work today more than ever before. ESF’s work on the ‘poverty of education’ began in the two countries where I’ve spent the most time, Egypt and Italy.

What’s next for your foundation?

Funtasia has an intense events season coming up. Partnerships for Youth Empowerment Global Gathering will see educators from around the world coming to our facilities in Luxor. We’re also organizing several fundraising events, from destination weekends in magical locations in Egypt to interesting panels, galas and a more experiential youth-targeted event in Italy.

Do you have any other philanthropic interests?

I’m co-chair of the Council of Fashion Designers of America’s (CFDA) Fashion Trust in Los Angeles with Tania Fares, which launches this fall. We’re working with the executive board on a calendar of events and bringing on new members and patrons. I’m also on the board of MILLE, a first-of-its-kind digital platform and consultancy agency dedicated to tackling Arab identity. By uniting unabashed opinions from some of the region’s most influential voices, MILLE puts a much-needed spotlight on youth culture in the region. We’re working to produce some interesting content and events. I’m also on the membership committee for Spring Place, a members-only collaborative workspace and social club where fashion, art, entertainment and design come together to work, host, relax and create. Their New York base is just fantastic, so I’m looking forward to seeing the Los Angeles version blossom. The way they curate design is exceptional.

Who has been your biggest inspiration?

Friends of my parents who were diplomats. I idolized their lives.

As a child, what did you want to be when you grew up?

[I wanted to find] a career that would give me purpose. When I re-read notes and interviews, though, I see a recurring thread—the dream of being in love and living in nature with a big family.

What advice would you give to your younger self?

Let go of shyness and insecurity, and don’t let conceit anywhere close. Don’t be afraid to listen to yourself and express your needs.

What’s the best piece of advice you’ve ever received?

Two come to mind. When I was shooting [The Legend of Kaspar Hauser] with Vincent Gallo, he said, ‘The worst that can happen to a creative person is expectation.’ The second was from my friend Anthony. Nearly 10 years ago, and long before I met my husband Alexander, he said, ‘Never marry/commit to someone betting on what the person will become, or how you will fix that ‘thing’ about them with which you’re not so comfortable.’ Basically, only commit to what’s in front of you, not the movie you’ve laid out in your mind. Solid advice.

Where do you feel most at home?

I was brought up in different cultures—Italy, France and the Middle East. We’re nationalized Egyptians, but originally from Syria, and my father grew up in Lebanon. When I get off the plane in Egypt and smell the air, I immediately feel like I’m home. Cairo is where I lived the first five years of my life, and my father still lives there. I get the same feeling of being “home” when I have a first meal upon arriving in Italy. And Los Angeles, where we’re spending time now, really feels like home. I like the life here.

Your most memorable trip?

Choosing one is hard, but going to Japan for the first time when I was 12 is up there. The cultural shock was dramatic. The distance between East and West was more evident at that time. Between the ancient and contemporary traditional culture, the temples and technology, which at the time was much more advanced than in Europe where I lived, it felt like a daydream. It was also my first visit to a shiatsu massage parlor. The therapist literally walked on my back, whilst holding onto a pole from the ceiling. I kept giggling.

What would you like for your last meal on Earth?

A feast of many dishes. Two Egyptian plates, molokheya and koshary; and a Lebanese fresh manakeesh with zaatar. Next would be my mother’s artichoke salad with Parmesan and lemon. I’d follow this with handmade fresh pasta from Piedmont in Italy, where I grew up.  A delicious cheeseburger cooked medium rare with pickles. A pizza made by one of the best pizzaiolos in the world. Maybe crispy fried chicken with fries. For dessert, Brazilian brigadeiro. Plus, panna cotta crème caramel, the ice cream from my hometown in Italy. I’d end with a beautiful profiterole. Oh wait. Maybe the end would be hot water with fresh mint.

Being paralyzed by fear.

What’s currently on your nightstand?

How do you stay grounded?

I exercise, hike and practice yoga. I haven’t learned to meditate yet, but I take time to be alone in silence. Nutritionally, I eat clean and use adaptogens. I discovered Ayurveda food and massages during my first pregnancy. I eat a varied diet, but try to remember to avoid combinations of certain foods together, which makes me feel healthier and lighter.

What personal achievement are you most proud of?

I’m grateful for all the positives that come my way, and do my best to learn from mistakes and complications. On the personal front, I’m proud of the family we’re building.

A life of love, one where I’ve taken care of my family and those I care about, as well as contributing positively to the lives of others.

What would you like to change about the current state of the world?

I’d rework the structure of leadership to make it more horizontal, more inclusive and encompassing.

What has motherhood taught you?

To be more understanding and accepting of myself and others.

Jewelry from my husband

Halasana, because it stretches the entire body

The PuLi Hotel & Spa in Shanghai, The Beverly Hills Hotel, and GoldenEye Resort in Jamaica. I still want to visit Adrere Amellal in Siwa, Egypt

We Are One by The Soil. That’s the way of life I aim for

A Place in the Sun