We spent the day luxuriating in the modernized 2018 Rolls-Royce Phantom. First stop, The Peninsula Beverly Hills. 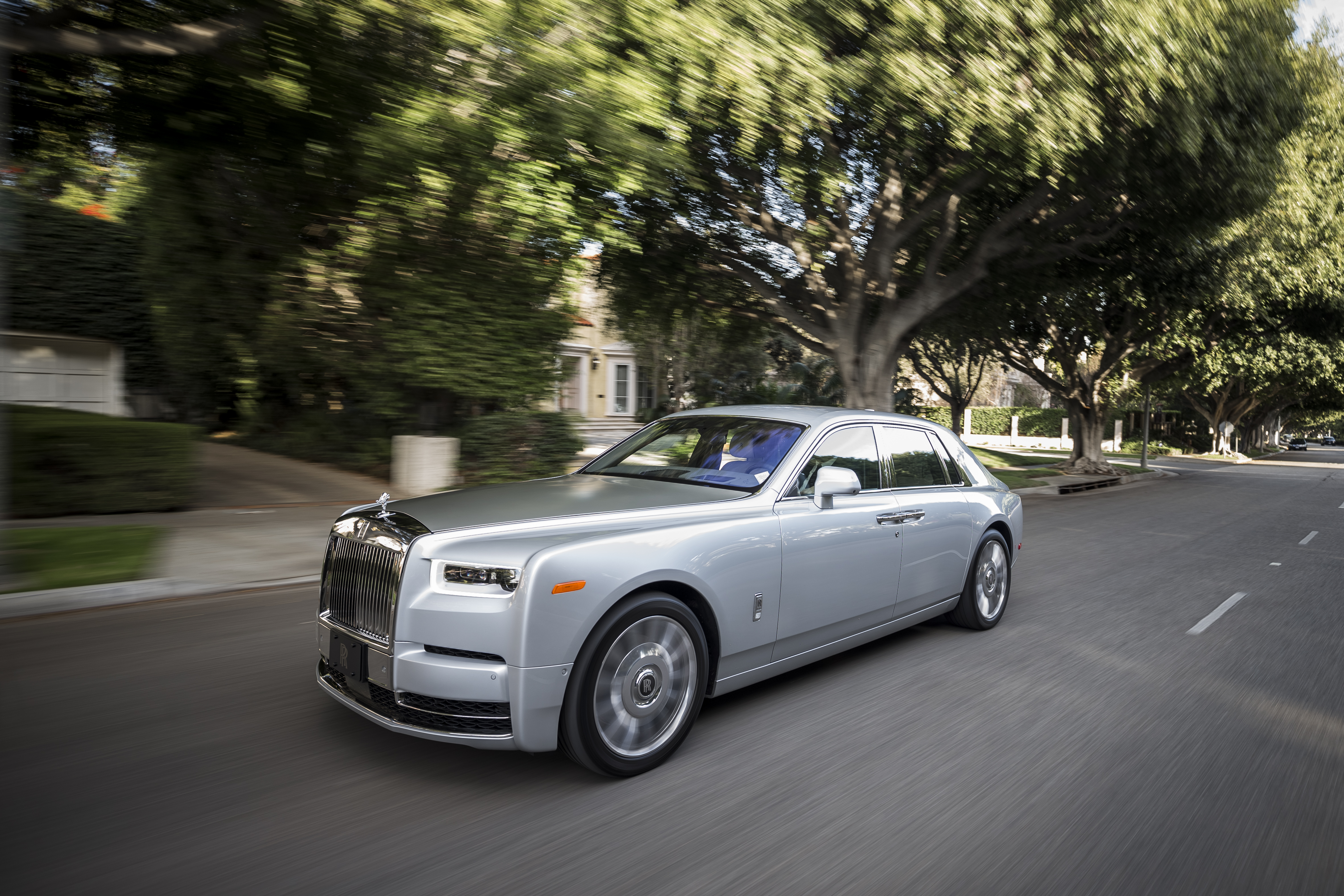 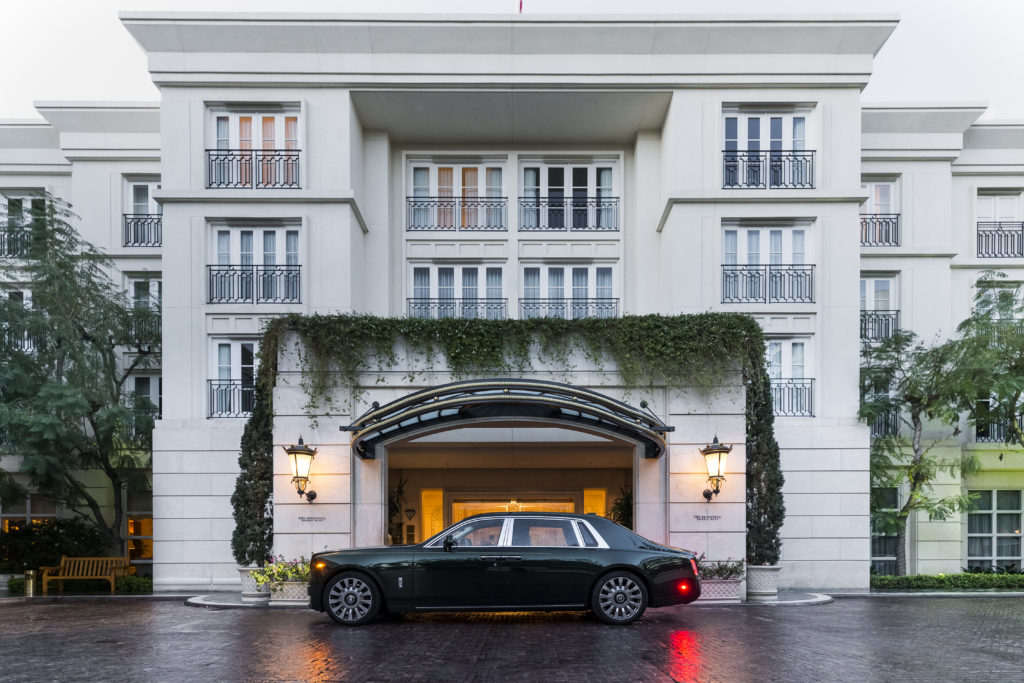 The 2018 Phantom VIII, the eighth-generation vehicle to carry the Rolls-Royce’s crown jewel nameplate, has been the motor car of choice for the world’s most powerful since the model’s debut in 1925. We spent the day luxuriating around Los Angeles, enjoying all the bells and whistles of this extraordinary vehicle, with a few VIP perks along the way. 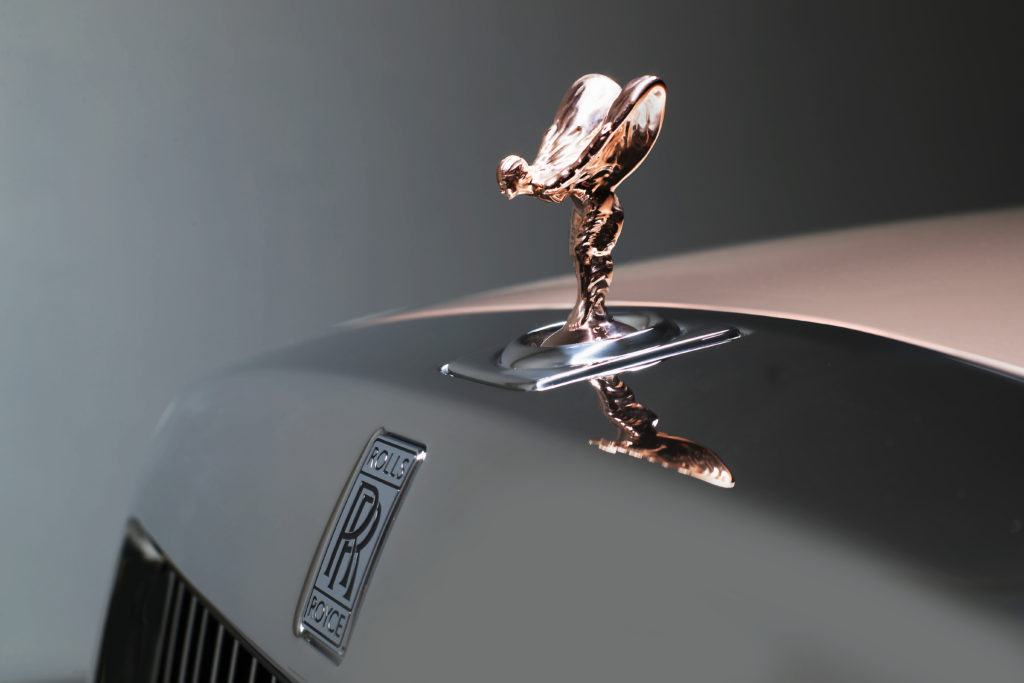 It’s impossible not to be in awe of such beauty as it rolls up with its Spirit of Ecstasy mascot standing proud, and anticipation builds for the magic carpet ride that awaits. 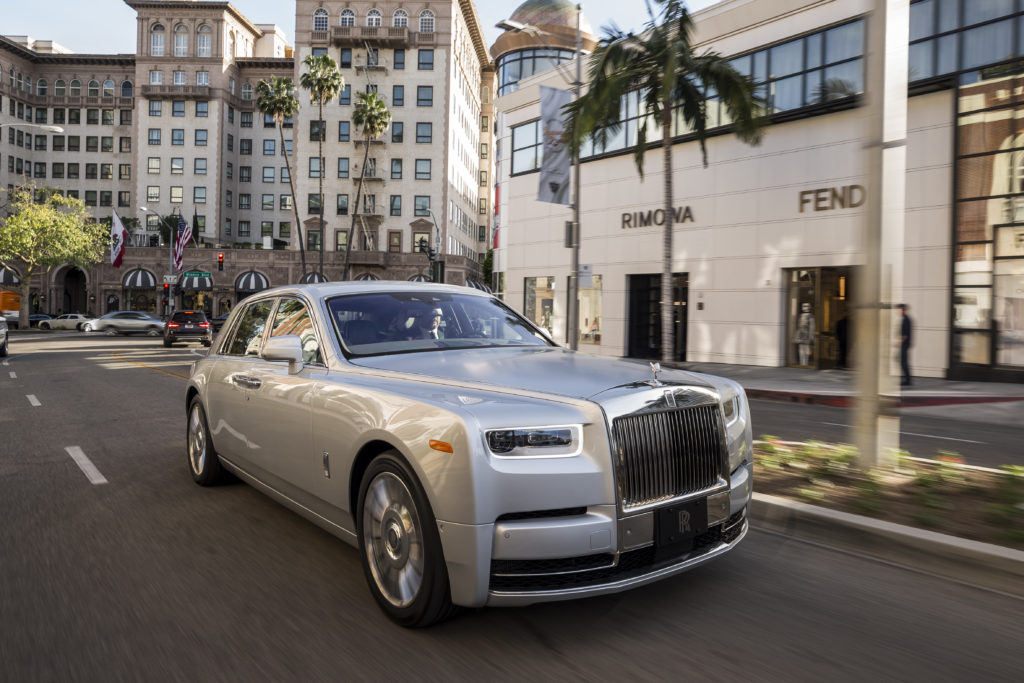 The 2018 model boasts a fresh new take on Phantom’s design, while staying true to Rolls-Royce’s DNA. The new model is also stiffer for improved handling, lighter, quieter and more advanced in every way as compared to its predecessor. 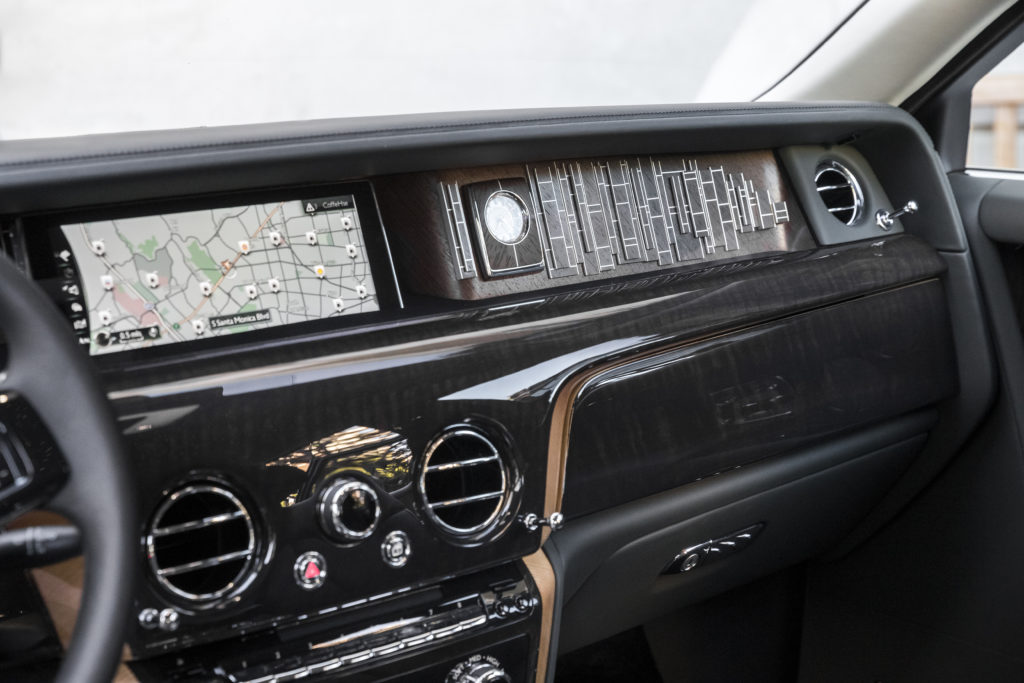 Rolls-Royce has always been synonymous with the highest levels of craftsmanship, refinement and quality. Among the many new wow factor elements found in the 2018 Phantom, “The Gallery” is a complete and palatial reinterpretation of the dashboard and instrument panel. In an industry first, the Phantom incorporates customers’ own favorite artwork into the instrument panel, displayed behind a high strength glass case, creating the ultimate rolling art gallery. 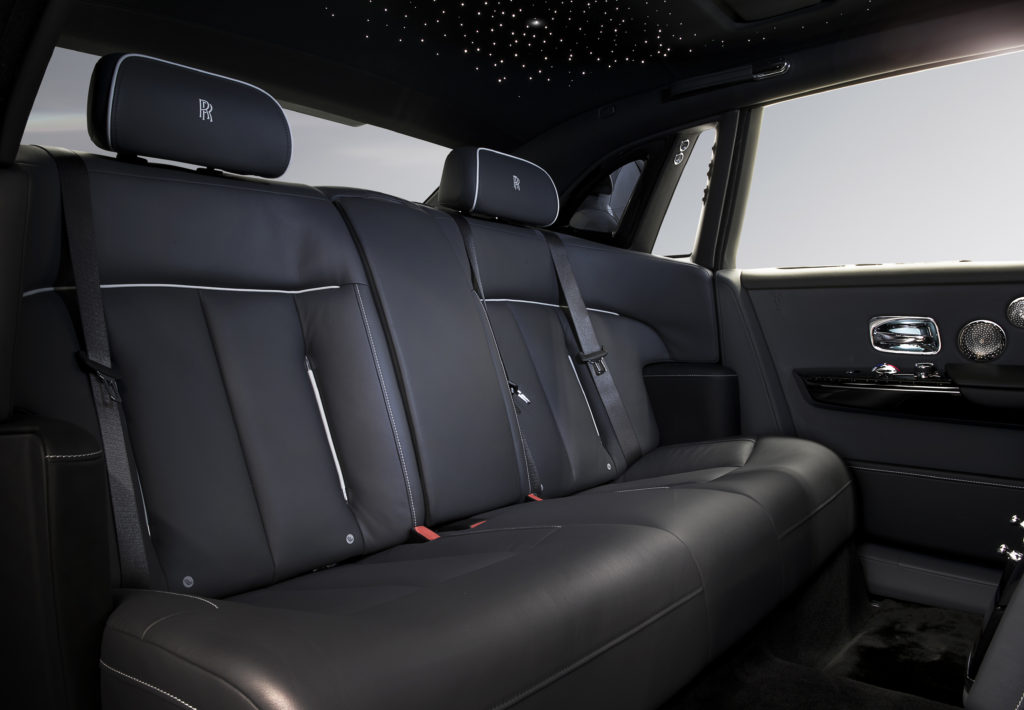 Inside the effortlessly closing, rear-hinged, coach-style doors lies the spacious and tech-advanced seating area for passengers. 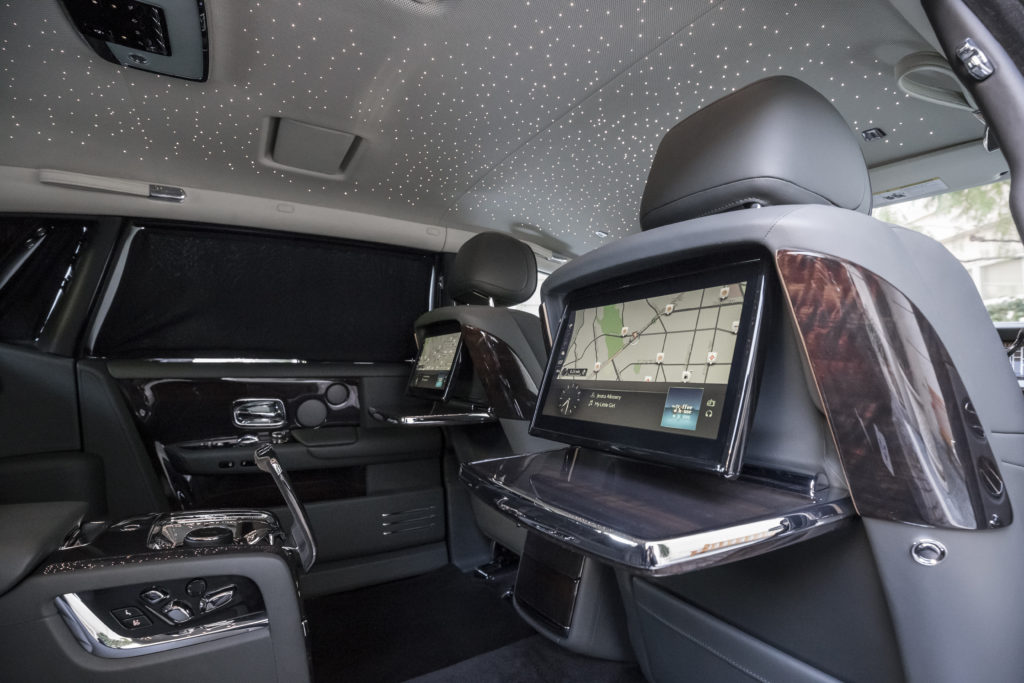 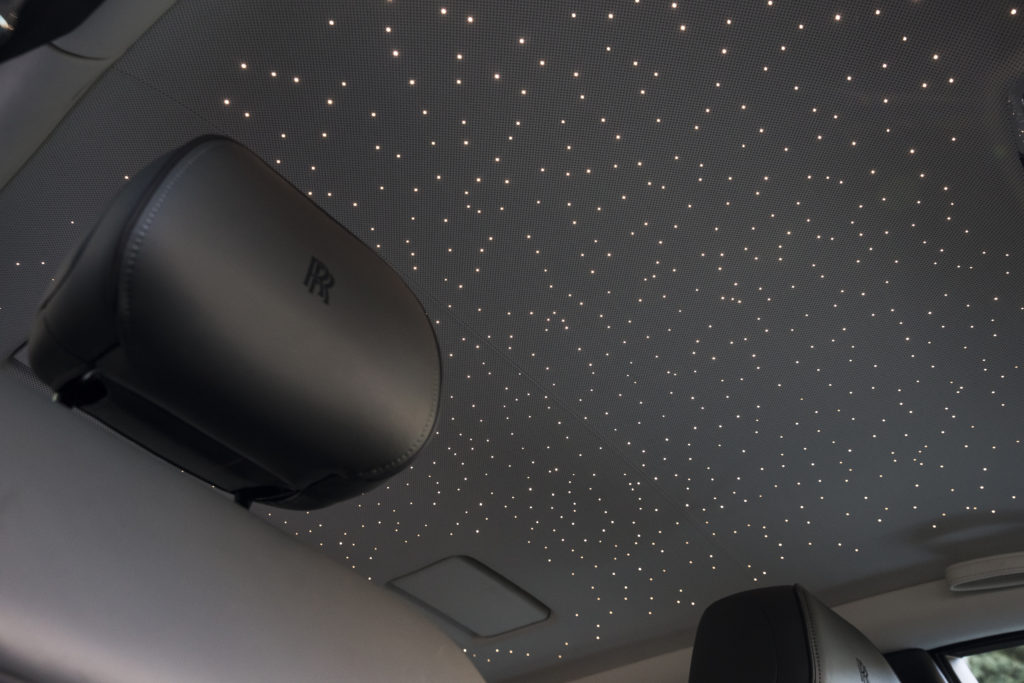 Up above, a starlight headliner sparkles, thanks to fiber-optic pin lights, giving passengers the sense of traveling beneath a canopy of stars.

Engineered for the future, the Phantom is the quietest Rolls-Royce ever made. You barely feel bumps in the road or lean through the turns. The super powerful beauty, with its 6.75-liter, V12 twin turbo engine, accelerates to 60 mph in 5.1 seconds and boasts an impressive top speed of 155. 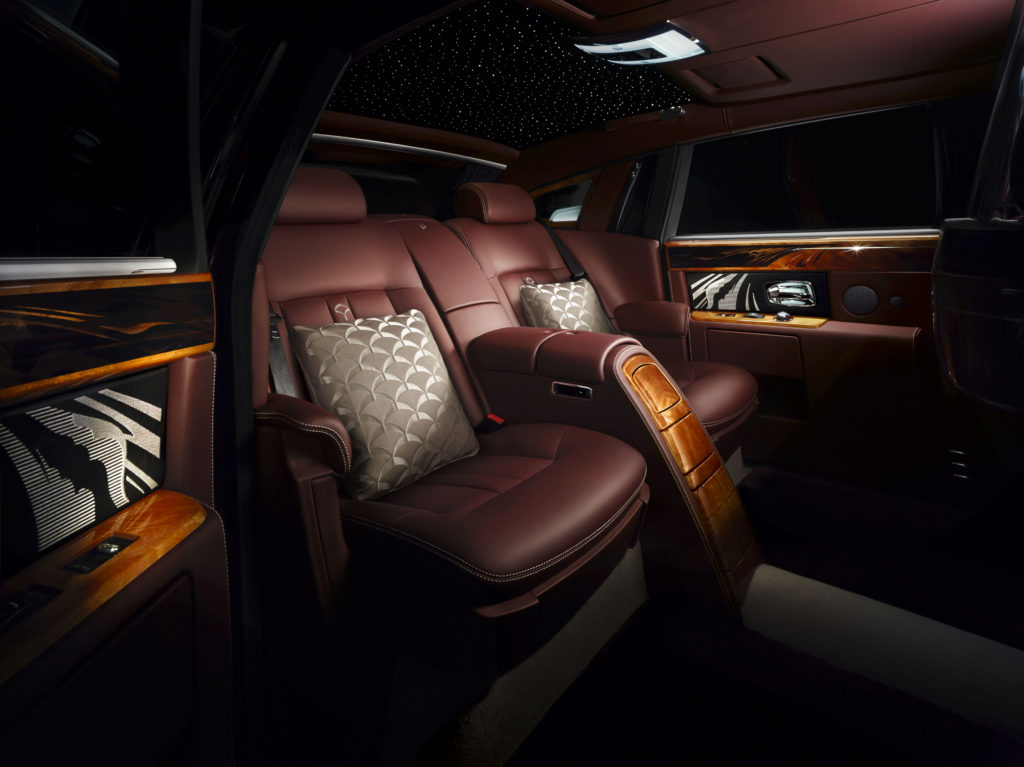 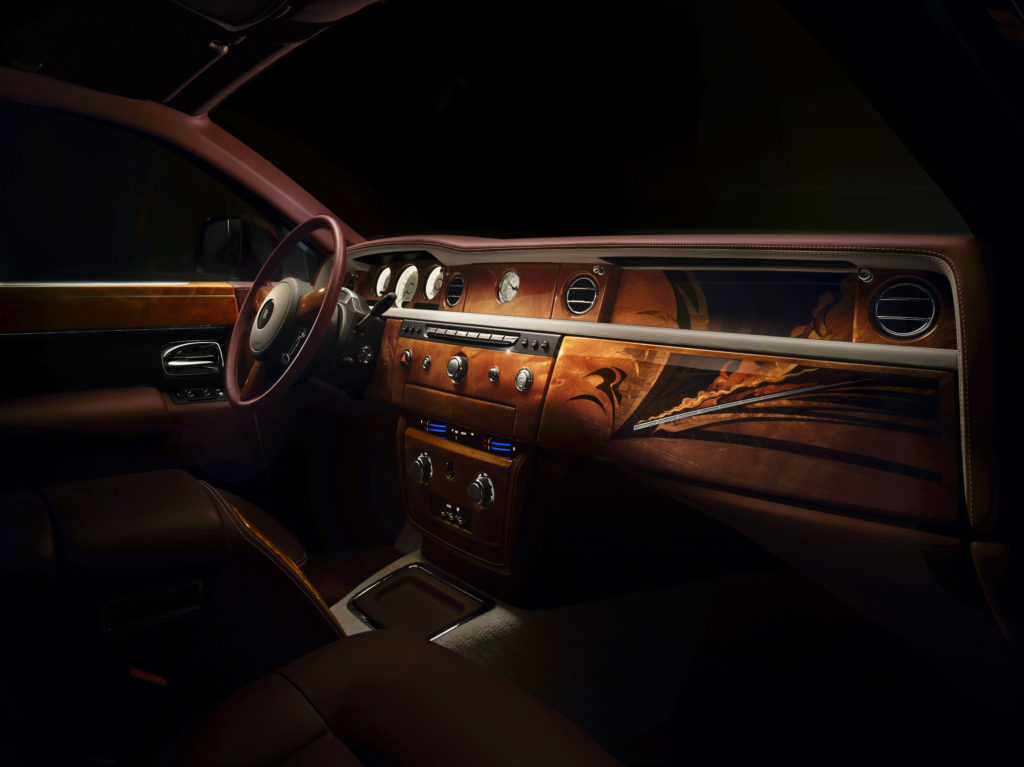 Rolls-Royce offers one of the most extensive bespoke programs. Buyers can customize their Phantom’s cosmetic details pretty much however they desire— any color exterior, expertly embroidered headrests, customized treadplates, even a personal, hand-painted monogram integrated into the coachline. You name it, and Rolls-Royce craftsmen will bring your wishes to life. 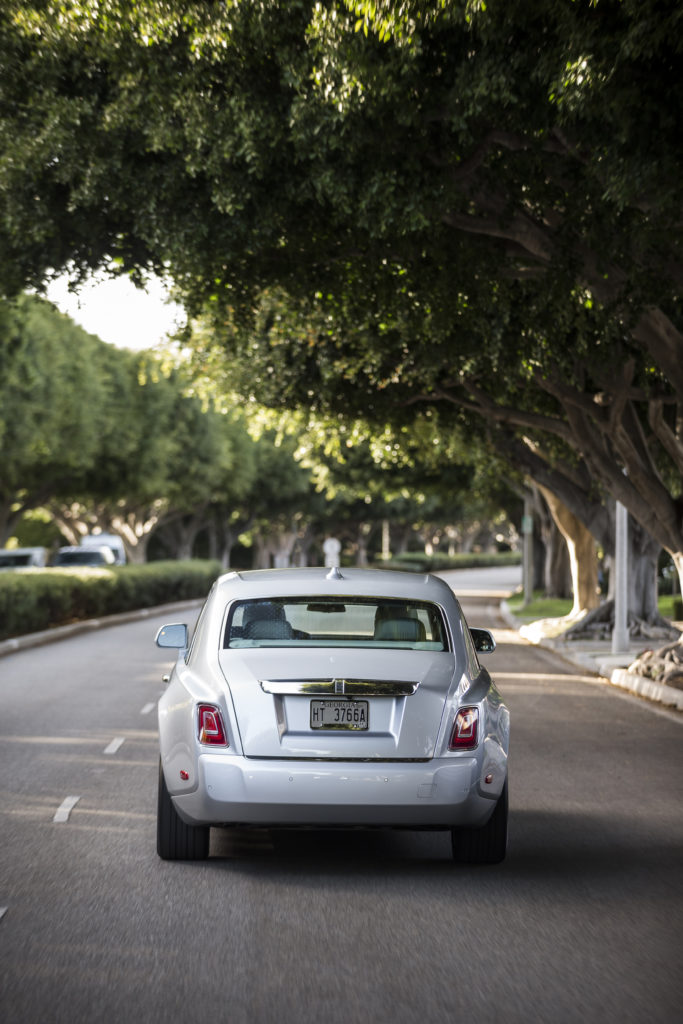 Rolls-Royce has been seen in its fair share of movies including Dirt, produced by ESX Entertainment. One of the stops we made along our ride was Warner Brothers studios for a private tour, screening of Dirt and a meet-and-greet with actress, comedian and screenwriter Christina Moore, along with ESX Productions’ business partner Ali Afshar. Afshar, an actor and producer, is also the founder and president of the world record-holding auto racing team Easy Street Motorsports (ESX). Dirt, featuring a Rolls-Royce Wraith, is now streaming on Amazon Prime. 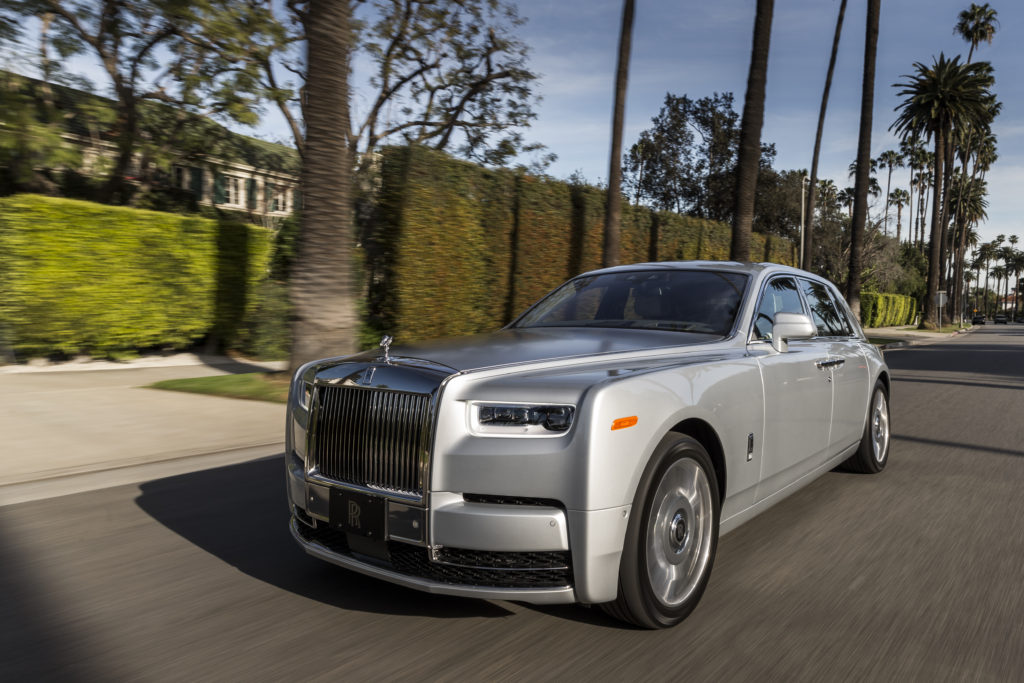 The New Rolls-Royce Phantom was recently honored with a Five-Star Car accolade at the Autocar Awards 2018, celebrating the best cars produced in the automotive industry over the past year. The New Phantom is one of only two cars to be awarded five stars in 2018.

Rolls-Royces can be found at most of The Peninsula Hotels worldwide … here’s a glance.

The Peninsula Beverly Hills complimentary house car drives guests within Beverly Hills and Century City in a choice of a classic Rolls-Royce or another luxury vehicle, while guests who book any of the hotel’s elegant suites can take advantage of the Suite Ride promotion and enjoy complimentary use of one of the hotel’s stylish BMW vehicles throughout their stay. A fleet of customized Mini Cooper S Clubmans is the most recent addition to the offerings.

The Peninsula Bangkok entices with its elegant customized fleet of Rolls-Royce Silver Spur, BMW 7 Series or a helicopter from the hotel’s private helipad. The hotel also offers a customized three-wheel tuk-tuk and four beautifully restored rice barges that ferry across the river from the Peninsula Pier Lounge to the Skytrain Station.

The Peninsula Manila features a fleet of beautifully customized luxury sedans. For more adventurous guests, its bespoke Jeepney, a Filipino cultural icon, is an exciting way to zip around town.

The Peninsula Hong Kong is famous for its record-breaking fleet of luxury vehicles, including an immaculately restored classic 1934 Rolls-Royce Phantom II, a popular choice for weddings and special occasions. For day-to-day transport, the hotel offers 14 Rolls-Royce Phantom Extended Wheelbase vehicles and two MINI Cooper S Clubmans, all of which have been painted the signature Peninsula Brewster Green and customized with refrigerators, iPod connections and more for guests’ comfort.

The Peninsula Paris is home to one of the magnificently restored 1934 Rolls-Royce Phantoms, together with a Rolls-Royce EWB Phantom II, two MINI Cooper S Clubmans and 10 BMWs—all in the traditional Peninsula Green.

The Peninsula Chicago boasts a bespoke BMW house car, available on a first-come, first-served basis, to chauffeur guests within two miles of the hotel. Guests who book a suite are invited to explore the city with a three-hour, chauffeur-driven experience in a custom MINI Cooper S Clubman.

Inko Nito heats up West Third with its second outpost in the City of Angels.