Catapulted to stardom as the lead in ABC’s #tgit firefighter drama Station 19, Jaina Lee Ortiz is sizzling hot, yet she couldn’t be any cooler. 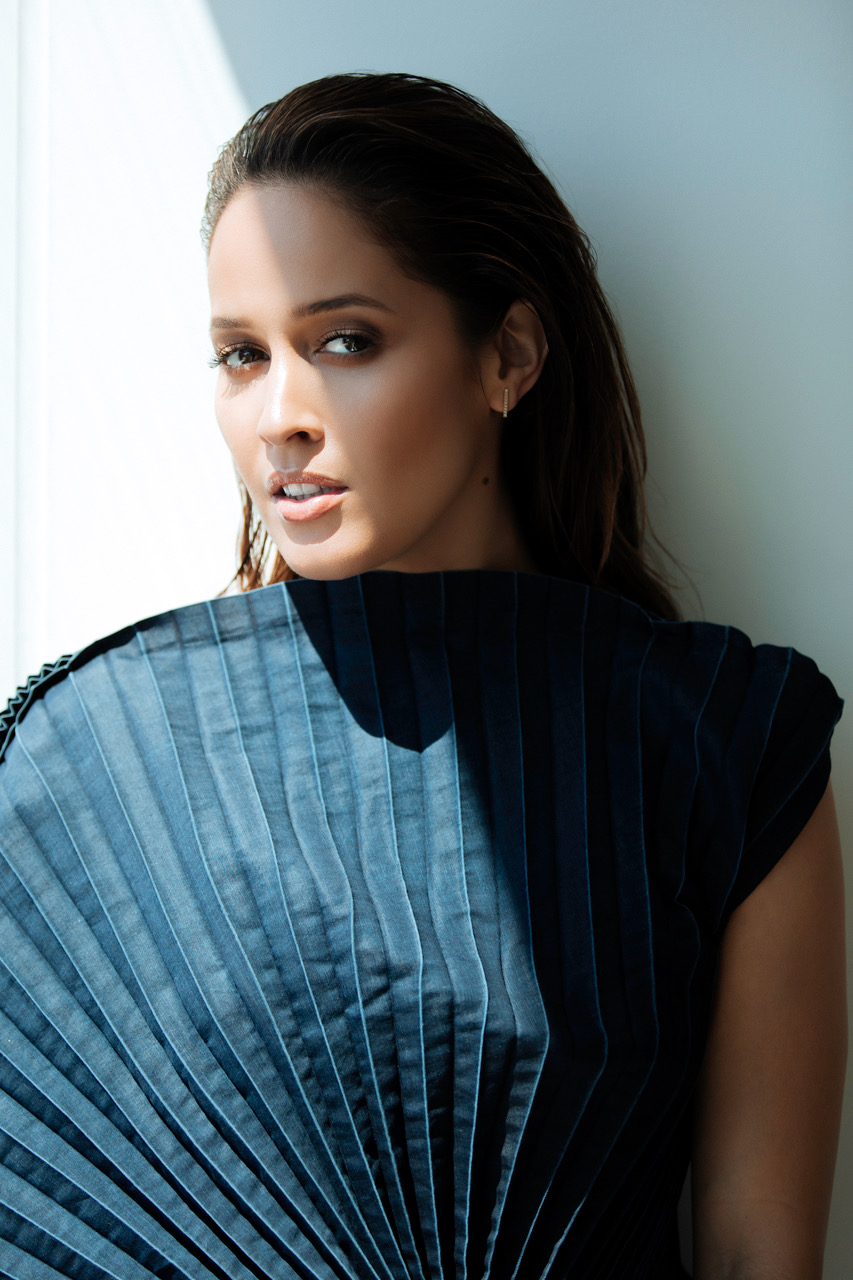 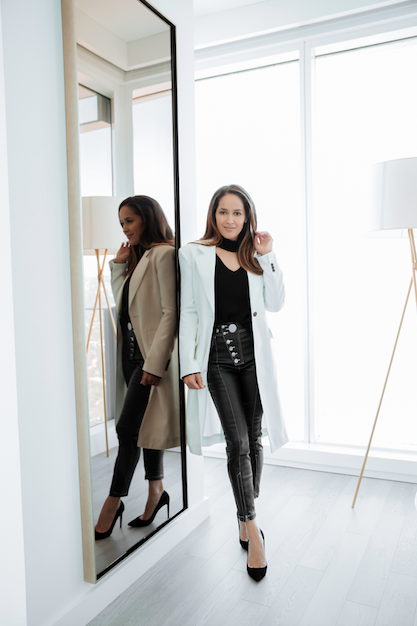 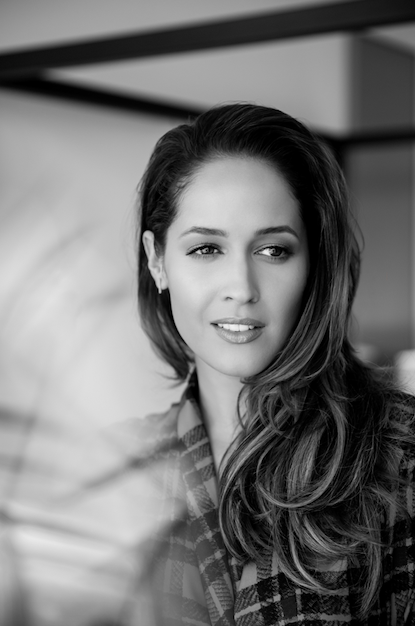 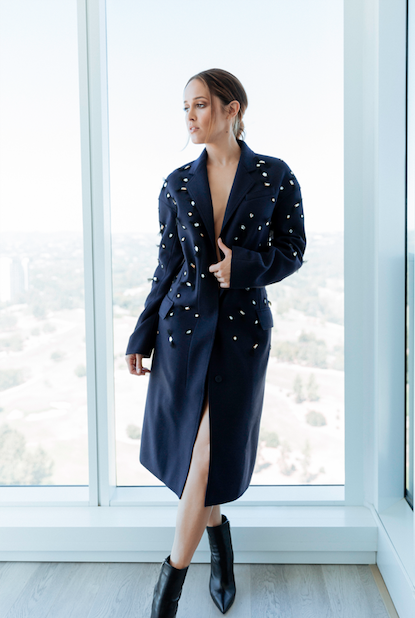 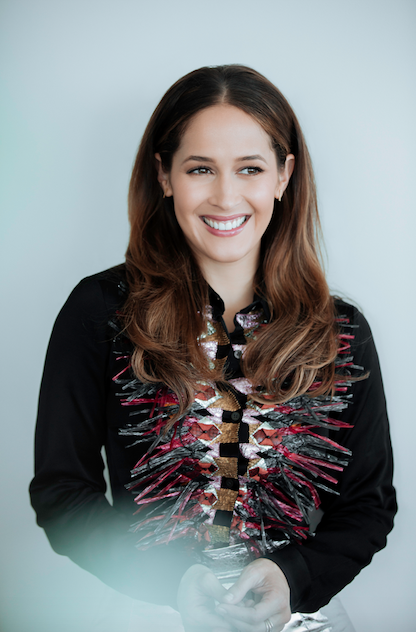 Hair and Makeup by { Natalie Malchev and Apollo

Shot on Location at { Ten Thousand

It’s a gorgeous Saturday afternoon, the kind that typifies L.A. weather—sheer perfection. We’re getting ready for our shoot in a breathtaking apartment on the 35th floor of the gorgeous Ten Thousand building overlooking the Los Angeles Country Club Golf Course—the views, insane—when Jaina Lee Ortiz walks in. Like a ray of sunshine, she immediately illuminates the space and everyone around her. So down-to-earth. In just minutes, we’re deep in conversation. First, we chat about her life before Station 19, how excited she was to land the lead role (especially considering she had auditioned for For The People, but Shonda Rhimes had other plans for her), the rigorous training the cast undergoes and, well, what it’s like to work with her hot co-stars (I had to ask). And that, of course, brought us to her favorite man … her husband, television writer Brad Marques. From there, we talked up a storm about how they met IRL (when she was at a salsa competition, pre-acting career).  She’s so open, nice and downright cool—the kind of person you just want to hang out with. Born in California and raised in the Bronx, Ortiz is proof positive that following your gut and your passion, and working hard, pays off.

You started training in dance at 9 years old, teaching by 15, and, by age 16, traveled internationally as a professional instructor and performer. What prompted your initial interest in salsa/mambo classes, and in dance in general?

I was originally interested in being a gymnast after watching the Olympics on TV for the first time. But then my mom enrolled me in dance class because it was cheaper, and once I realized I got to wear heels, I was hooked.

What inspired the transition to acting?

When I was 16, one of my salsa performances caught the eye of two NYU students, who asked me to be a part of their short film. I had a blast and fell in love with the process, though I had no clue what I was doing. I didn’t re-visit acting until I was 20, and made the decision to leave dance completely and go full steam with acting.

Do you feel that your dance experience gave you a leg up when it came to feeling comfortable acting?

Absolutely.  Dance 100 percent gave me the tools to apply towards any craft. Dance allowed me to have awareness and control of physical expression, which is a huge component to acting.  It’s given me the gift of discipline, dedication and good work ethic.

What do you think about the resurgence of dance in some of Hollywood’s biggest projects in recent years? Do you think the trend will continue?

I’m so glad that dance has exploded into what it is today.  With various media platforms, the world is now exposed to dance in all forms, and the talent is unbelievably impressive. I don’t think of it as a trend. I think of it as a form of self-expression that transcends language.

Any upcoming projects that combine dance and acting?

My dream project would be to do a remake of Flashdance in the world of Latin culture.  I lived it.

How did your previous acting roles prepare you for your role as Andy Herrera on Station 19?

I’ve always played bad-ass characters. I don’t know what it’s like to play a character who isn’t layered with strength, dignity, tenacity and intelligence. Also, I have really amazing parents who showered me with love and confidence and told me I could be anything I wanted to be.

Tell us about the audition process. We understand that you first auditioned for For The People but Shonda pegged you for the role of Andy on Station 19.

It was probably the best and most terrifying audition experience I’ve ever had because it’s when I met Shonda Rhimes for the first time. I got to sit and chat with Shonda, her producing partner Betsy Beers and their legendary casting director Linda Lowy. The room was full of energy, my stomach was in knots and I remember stuttering from being so nervous.  I was so excited about For The People.

Tell us about the day you found out you nabbed the show’s lead role?

I was walking my dog and wondering how the meeting for For The People went. And then I got the call. My agent said “This is a curveball. Shonda Rhimes wants you for the Grey’s Anatomy spinoff.  There’s no script, all we know is that it’s a show about firefighters.”  I felt like I had won the lottery.

Your character, Andy Herrera, is pretty much a badass. What’s it like to own the role of a strong female in this entertainment zeitgeist and on a show focused on the male-dominated field of firefighting?

Playing Andy Herrera makes me feel empowered every day.  She is proof that she’s capable of handling anything a man can. Yes, there are very few female firefighters in the FD, but they do exist, and Andy pays homage to the resilient women who continue to fight for their place.

What type of training did you have to undergo before taking on the role?

Before shooting, I decided to fully engage myself in understanding the demands for the job.  I met with two female captains who showed me around the station and included me on ride-alongs. I even took the CPAT (Candidate Physical Ability Test) and, yes I’ll brag, I passed!

What’s it like being on a show produced by Grey’s Anatomy icons Shonda Rhimes, Stacy McKee and Betsy Beers?

These women are the cream of the crop. This is the first time in my career where I’m fortunate enough to say that my bosses are females. That feels pretty fucking amazing.  And this is what I love most about Shonda Rhimes—she gives women the opportunity to rise into positions of leadership and power.

Did you feel extra pressure about being on a spinoff of such a popular show?

The pressure wasn’t there because when you have a story-telling team like Shonda Rhimes, Stacy McKee and Betsy Beers, you know you’re in good hands.

How have you adjusted to the show’s rising popularity?

It’s been a process of surrendering.  And what’s beautiful about it is that we are lucky to have an existing, passionate fanbase that’s been around for 15 years [watching Grey’s Anatomy]. Not too many shows can say that. It makes me happy to hear that most [viewers] who love Grey’s also love Station 19.

How do you prepare for such intense physical days on set?

What do you in and around L.A. that’s restorative?

Drama TV schedules can be brutal, so I love to engage in activities that make me feel normal. Quality time with friends, movies, lunch dates, etc.

Have you ever been afraid of fire? And how about now that you’re on the show?

Not really afraid of fire, except when we work with it on set. Sometimes the flames are exceptionally large, I remind myself how lucky I am to be wearing the gear.

What’s the scariest thing that has happened while filming among flames?

Funny enough, the flames aren’t as scary as the amazing crafty table with all the dangerous snacks.

The show is brimming with hot actors. Does your husband, television writer Brad Marques, ever give you a hard time about that?

In fact, he loves it.  He’s a storyteller.  He lives for it.

Speaking of your husband … How did you two meet?

We met on the dance floor.  Salsa, of course.

What drew you to Brad?

It wasn’t about all the things he said to me when we first met, it was about what he did.

When did you realize he was the one?

After our four-hour-long conversation on the phone.

You took a big leap moving from NYC to Texas to be with Brad. Tell us about that experience.

The most wonderful thing about taking that leap was that I knew in my heart I was taking it with someone who would be willing to leap back with me. We both ended up leaving everything for California to chase our dreams, together.

What do you love most about Brad?

He always makes me laugh.  Like, so hard that it’s ugly.

Do you socialize off-set with your co-stars?

As much time as we spend together on set, we also love being around each other in our free time. You know that annoying couple who can’t get enough of each other and it makes you sick? That’s the cast in a nutshell.

You used to be a makeup artist for MAC Cosmetics. Do you still like doing makeup?

Love, love, love makeup. I just did Barrett Doss’s makeup the other day while we were casually lounging at her place.  Makeup makes me so happy.

How do you define your personal style?

We all have things we’re good at. Clothing myself is not one of them.

How do you deal with the pressure to be “perfect” in Hollywood?

Fuck perfection. I’m all about being real. I don’t relate to someone who has their entire life wrapped in a perfect, shiny bow.  I have great days, and not-so-great days. I break out, I get lazy, I have pity parties, I eat like crap sometimes. People want to see people in Hollywood.  Not someone who has it all together 24/7.  That’s boring.

You have to pick a dress for the Emmy Awards. Which designers do you ring up?

I’ll leave it up to my master styler, Sara Alviti.  I trust whatever direction she leads me in.

Let’s talk jewels. Which designer sparklers would you most like to wear to your next soiree to complete a fantasy ensemble?

This is not something I think about. However, if it shines, I rock the hell out of it.

What is something most people would be surprised to learn about you?

I have a weird obsession with staring at people while they eat. And I’m completely fascinated with magic.

What do you miss about the dancer lifestyle?

How do you keep balance in your day?

I’m a very organized person and I organize everything in my life. It’s the only way I can function.

With zero thought for the price tag, what luxury accessory would you buy to treat yourself?

Is there a specific cause or charity that’s nearest and dearest to your heart?

Step Up, an organization that propels girls living or going to school in under-resourced communities to fulfill their potential by empowering them to become confident, college-bound, career-focused and ready to join the next generation of professional women.

What are some of your hobbies?

Secrets to having a successful marriage?

Making a solid team with your spouse.

Who or what inspires you?

What are you most grateful for?

That’s a never-ending list.  But I’m most grateful to be alive, to be surrounded by people I adore.