The planets are in alignment for actor Rami Malek, Mr. Robot’s paranoid computer hacker, who rocks his latest onscreen role as Freddie Mercury in the new biopic Bohemian Rhapsody. 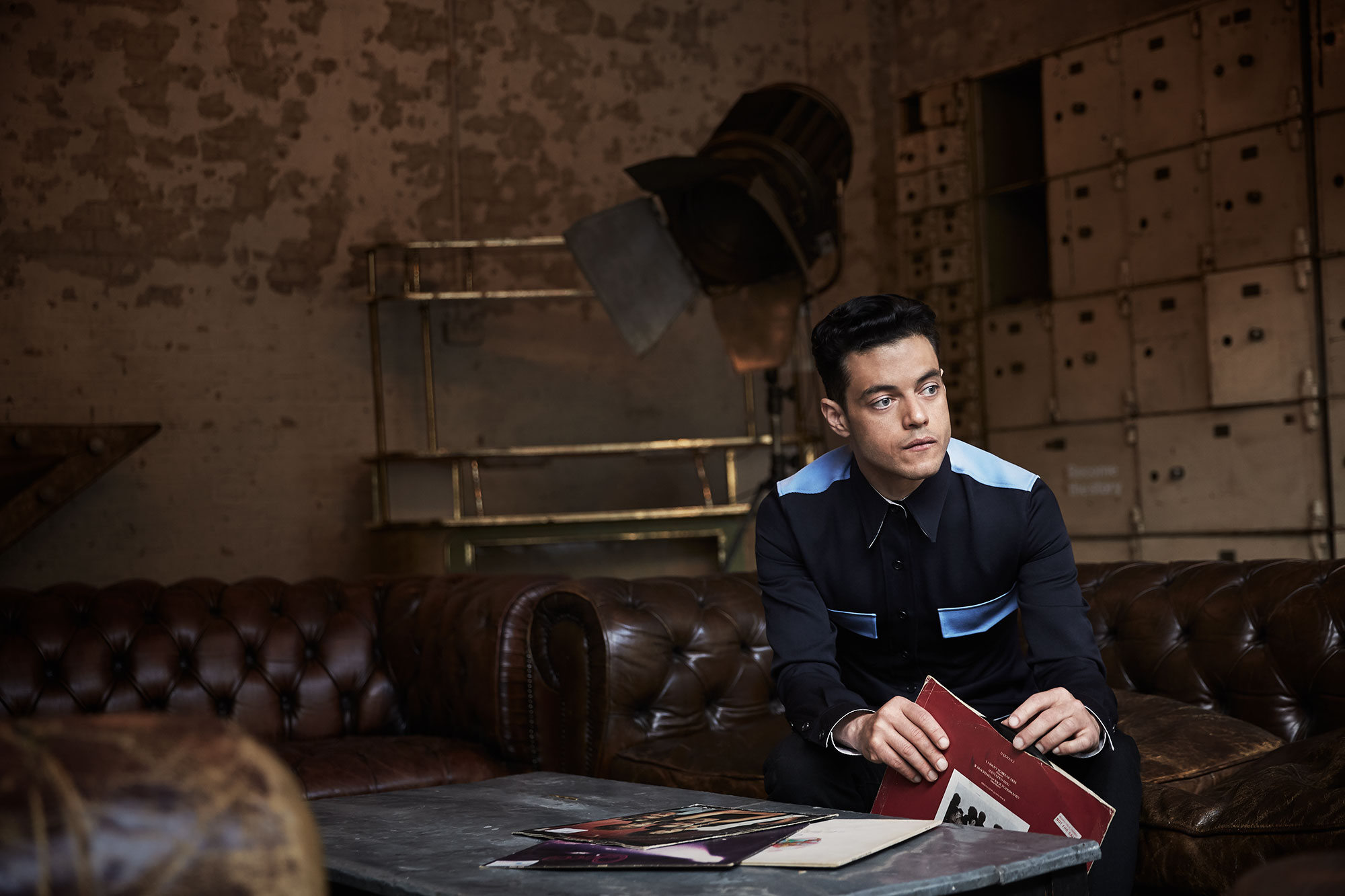 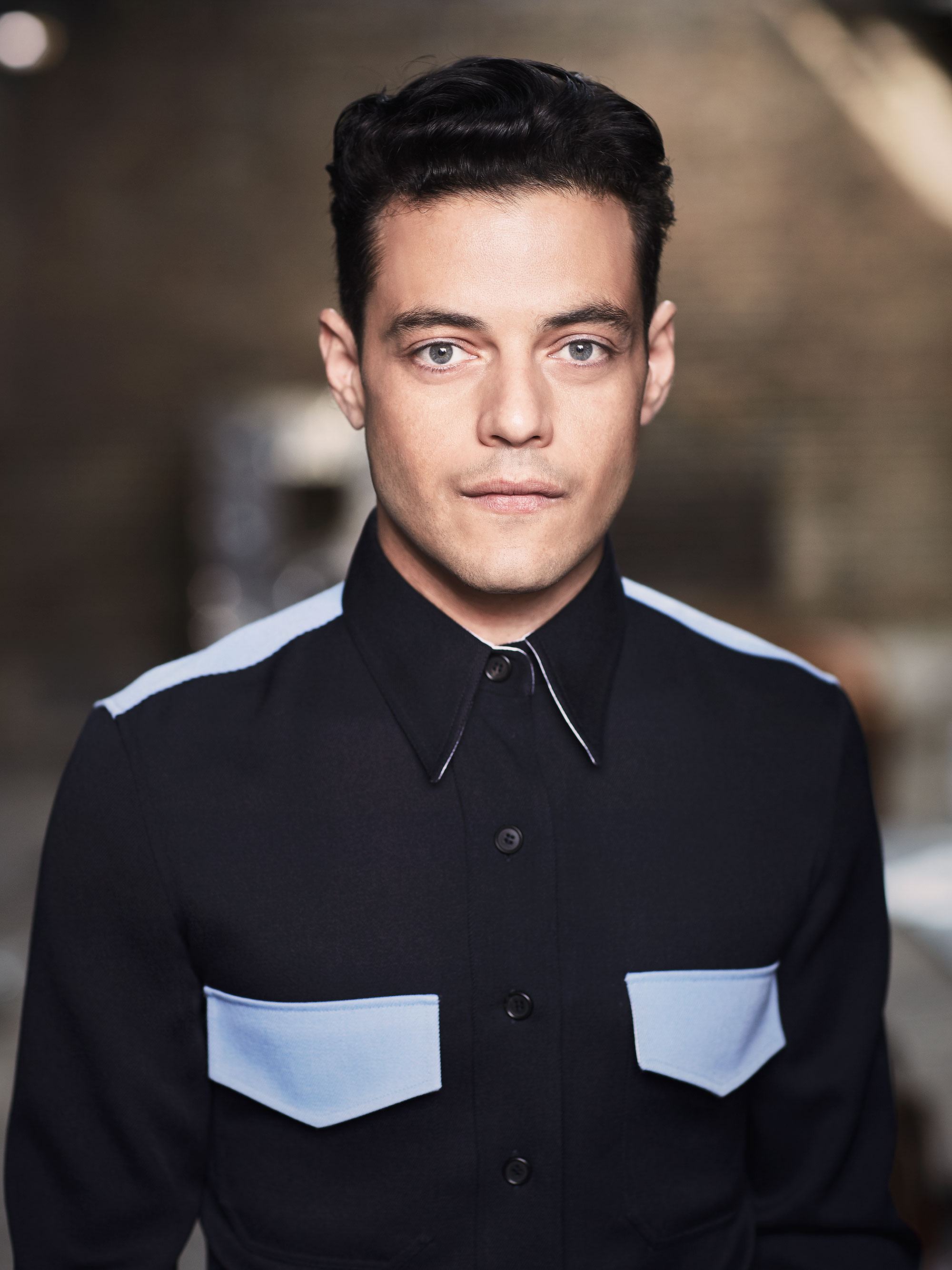 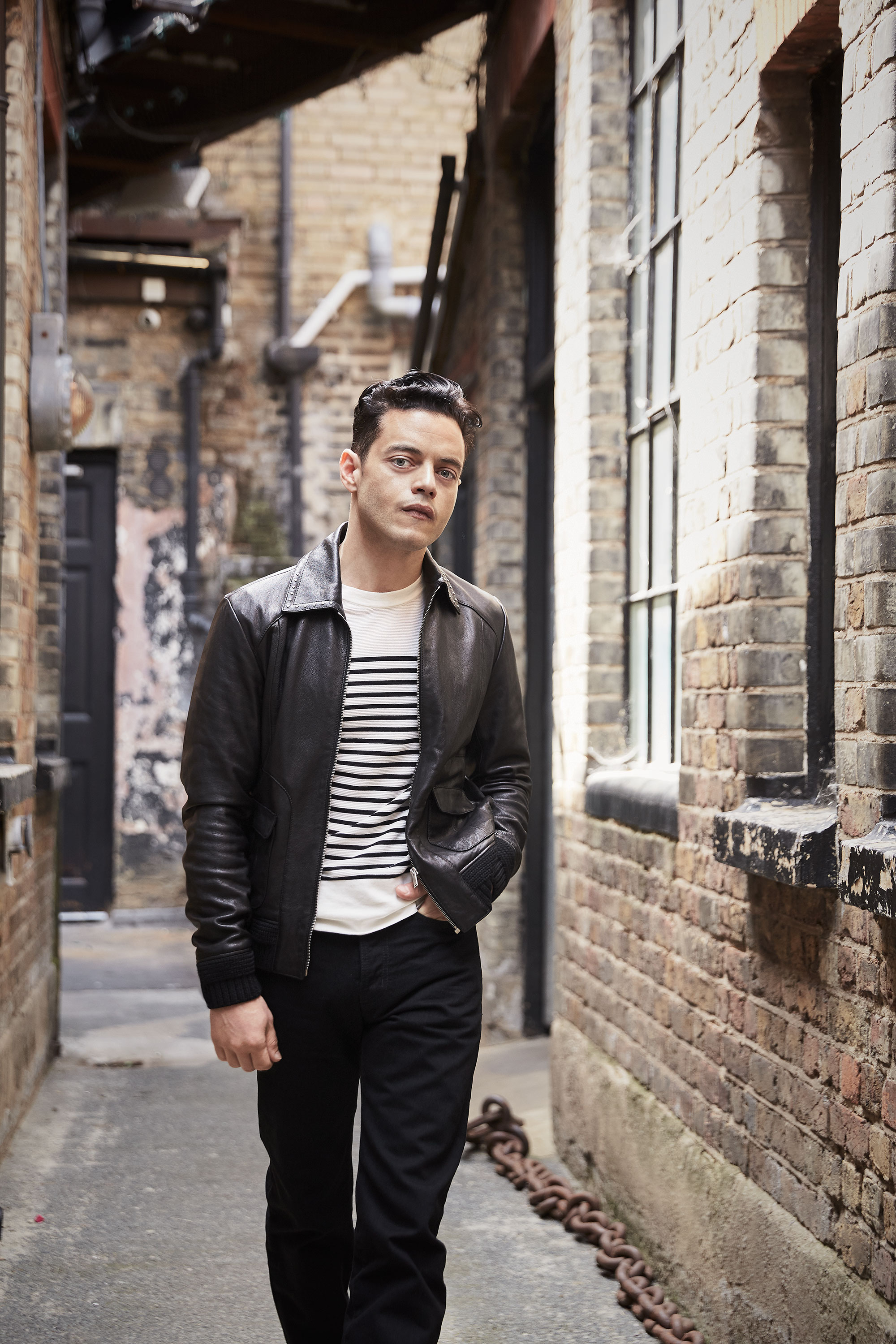 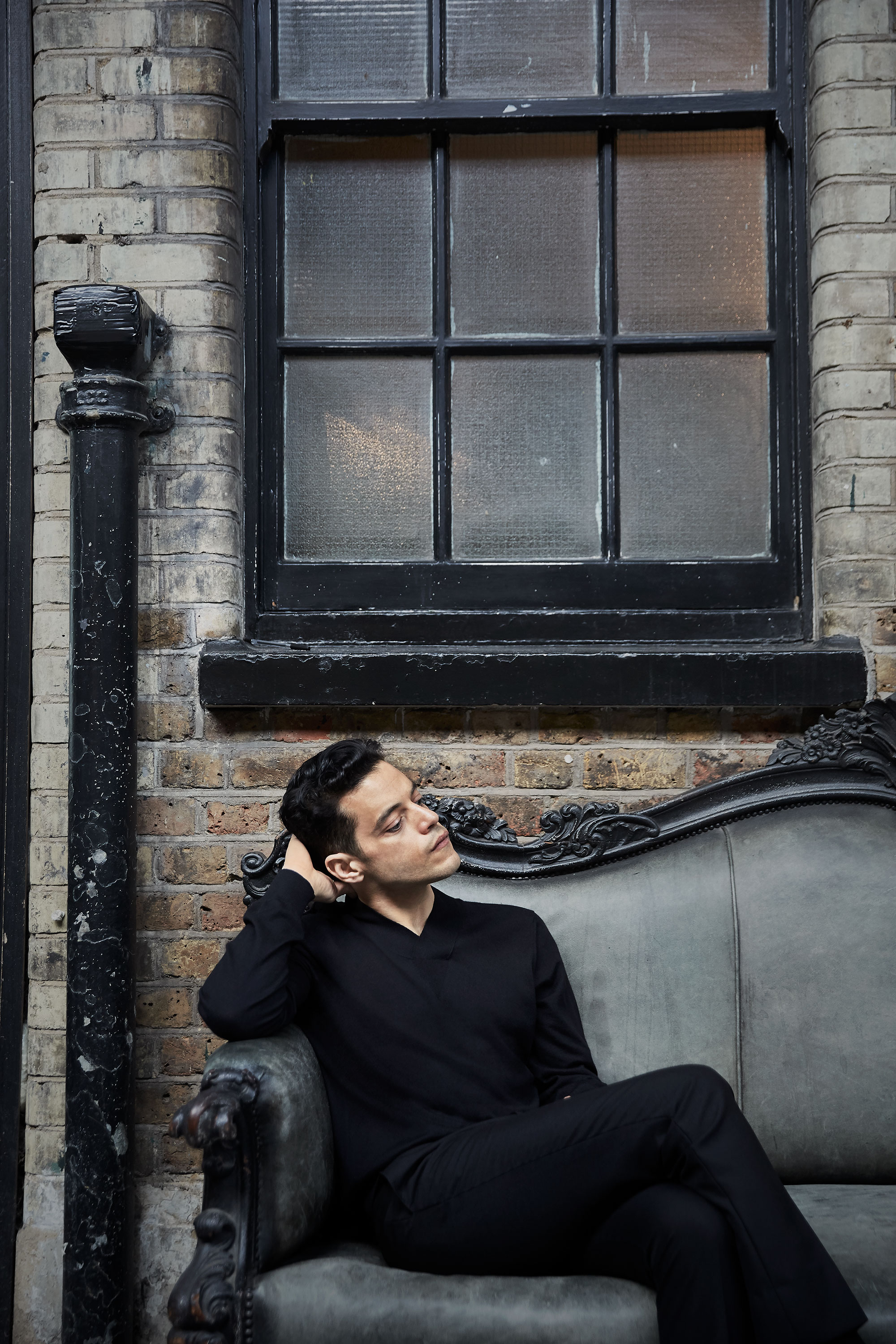 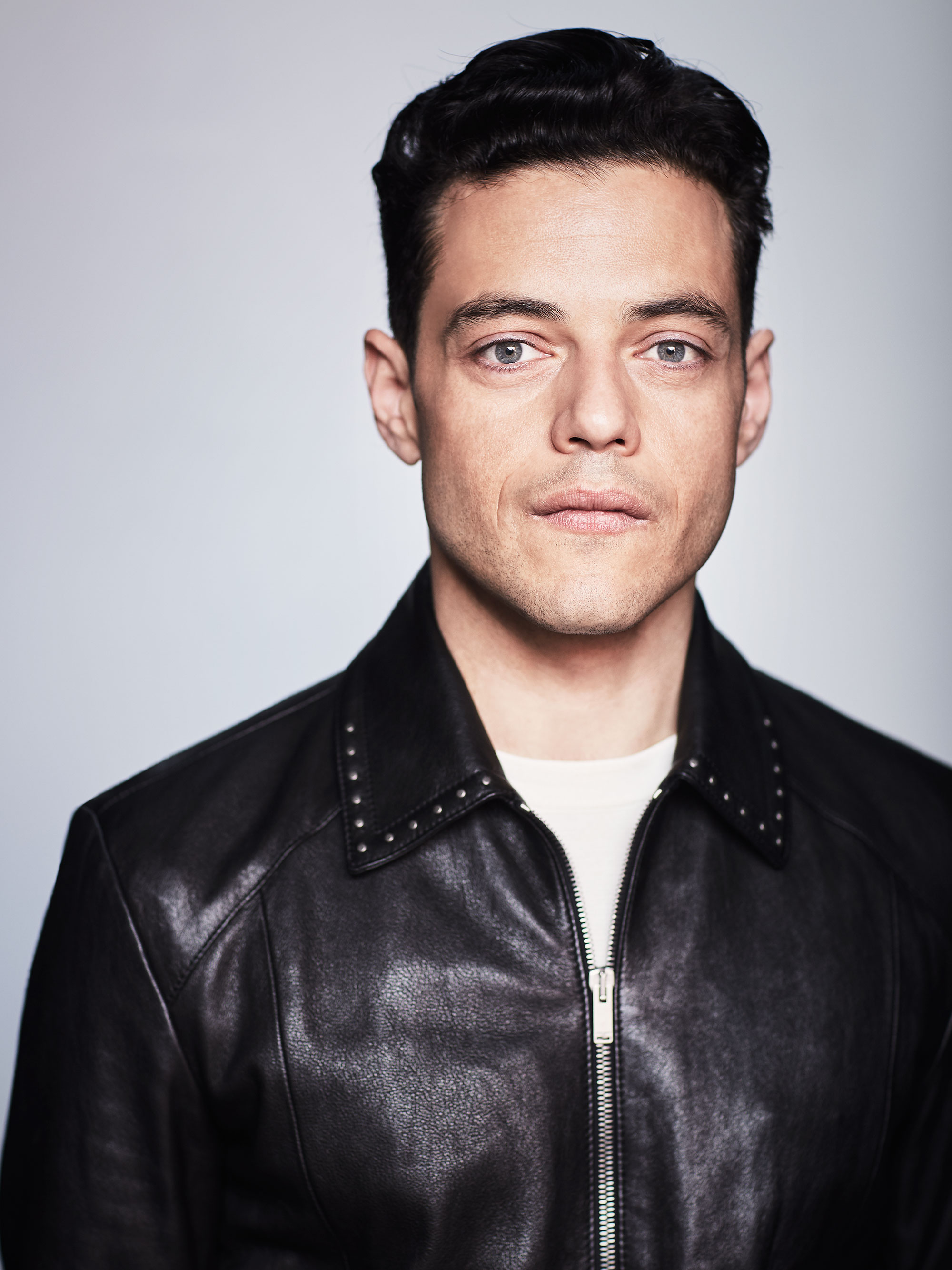 For Rami Malek, embodying legendary rock star Freddie Mercury—the iconic frontman for Queen, who died of AIDS-related pneumonia in 1991—is a monumental moment in his life and career. In Bohemian Rhapsody, Malek was tasked with talking, walking, singing, dancing and behaving precisely like one of the most famous musical showmen in the world. “I don’t think there’s anyone who doesn’t know at least one Queen song,” marvels the star of the biographical film tracing Mercury’s orbit, from his Zanzibar roots to the height of his fame.

As 37-year-old Malek also prepares to reprise his Emmy-winning role on the fourth and final season of USA Network’s Mr. Robot, he rhapsodizes about the making of this new movie, which features a re-creation of Queen’s historic, heart-stopping, dramatic performance at Live Aid, the 1985 benefit concert for Ethiopian famine relief. “This film has run the gamut of emotions for me,” he confides. “But the highs have been higher than any you could hope for.”

What do Queen’s songs mean to you?

They’re timeless. Queen’s music is a global phenomenon that transcends generational and cultural boundaries. Two songs—“We Are the Champions” and “We Will Rock You”—are really audience participation songs and there’s no band that has accomplished stadium anthems in the same way. They perform [these songs] and everyone out there, in those massive arenas and stadiums, is collectively singing and moving in unison. Those songs unite people.

What was your initial reaction when you were asked to play Freddie Mercury?

At first it was shock. As an actor, I don’t think there’s ever this law of depreciating excitement when things like this happen in your career. It’s a moment that halts you in your tracks and it is at once euphoric and thrilling. Then there’s a hit of the magnitude and the weight you have to take on with this legendary man who lives in the hearts of so many people and is revered as being one of the most talented artists of anyone’s generation. So you can imagine the immense weight of that. Now there’s also some ambitious part of me that gets wildly excited and starts thinking about how to begin to inhabit this unique and magnificent creature.

How did you prepare for the role?

I tried to build from the ground up, so I looked at his childhood. Here’s a boy who was born in Zanzibar and shipped off to St. Peter’s School in Bombay at a very young age. He returns home to Zanzibar and there’s a revolution going on and his family is forced to seek refuge in England. So there he is with the name Farrokh Bulsara. He refers to his childhood as an “upheaval of an upbringing.” So I just started to somehow appropriate that to my own life in a way, being a first-generation American. My parents moved to America from Egypt to seek a better life for me. When I told them that I was going to be an artist, that was a very difficult stance for me to take. So there were things that I could relate to, which somehow [made it] less of a daunting task [to play] Freddie Mercury, the superstar.

Did you find a theme in his songs?

Without a doubt it’s love; the search and desperate need to find love and how that has escaped him. Here’s a man who, throughout his life, was constantly searching for love. Another theme is identity. There was the man on stage versus this young man who was trying to use any of his God-given talent and the tenacity he had to just make a home for himself in this new land. And then, given the opportunity, rise to be who he inevitably was.

There’s also a physical transformation on screen. We see you, as Freddie, change from a shy young man who joins an unknown band into the incredible showman who captivated an audience of more than a billion people when Queen played Live Aid. How did you do that?

It gives me chills just thinking about it, because he is exactly that, he transforms. It’s always Freddie, but there are different versions of him, which I think is beautiful. It’s not Jekyll and Hyde, they are all him. It’s who he wants to be in the given moment and the given situation, which I find so endearing. I saw one interview where he said, “On stage I can be the macho man that everybody wants me to be.” And I think you see that in the ’80s, this performer who throws his fists in the air and holds the crowd with the raising of one arm. Whereas in his younger days, he was very fluid and wispy. So I started to identify that and worked on the progression of the character in that way.

How did you learn to move the way Freddie moved—onstage and offstage?

Freddie was not deliberate about what he was going to do on the stage before he went on. He didn’t think about what his moves would be the next evening. Things happened in the moment, depending on the feeling, and it was always inspired. Our producers would talk about working with a choreographer, and I said, “It’s not choreographed. There’s nothing about him that’s choreographed.” I wanted to find someone who could essentially understand the way he moved and why he moved the way he did, so I found a movement coach. The way Polly [Bennett] worked was fantastic. She understood how to approach this and we began talking about Freddie’s heritage and his youth and how his shyness would be articulated [for example] in just the way he would sit on the couch and pick up a cup of tea or the way he would cover his teeth because they were a very unique size. And how that would evolve into things that he could manipulate as he got more comfortable with himself. It explained for me why he had this kind of ethereal nature to him early on and how there was an evolution to his stage presence and his physical presence, as he grew older.

Can you describe what happened when Queen band members Brian May and Roger Taylor first heard you sing as Freddie?

Oh, that was an earth-shattering experience. I had to watch myself [on film] interpreting Freddie, standing between two of the people who know him better than anyone. You can imagine how intimidating that was. Roger was characteristically cool and reserved and Brian, who I noticed had been eying me up and down, came out with such a compliment that I was quite moved. I had put all of myself into preparing for this and trying to do this person justice. Getting acceptance from them was inspiring and propelling.

Can you talk about Freddie’s relationship with Mary Austin?

Mary meant the world to Freddie and surprisingly few people are aware of the impact she had on his life. He referred to Mary as the love of his life and wrote the iconic song [“Love of My Life”] for her. She was his confidante for so much of his life. She was someone who understood him in a way that no one else could or would, and vice versa. They were in a romantic relationship for six years and were tethered together ’til the end of his life. He referred to her as his common-law wife, and the person he trusted the most. Without Mary, I don’t think we would have had the Freddie Mercury we know today.

Freddie kept his sexuality a secret. Why do you think he stayed in the closet?

The most extraordinary thing about his sexuality and that aspect of his life is that he never spoke about it.  He transcends all these stringent labels and boxes that we try to impose on people. He never confined himself in that way. He just was. And I think that’s what will make him an even greater icon, if that’s even possible. That’s why he is so accessible to everyone.

You know, it’s too difficult to pick a favorite favorite, but I do really love Brian’s “Hammer to Fall” [from the album The Works]. That’s a great song. But for me, it would be like picking a favorite child. They are all going to last for a long, long time.