Wilshire Skyline breaks new ground with a pair of properties that are reshaping old Hollywood—one, a modern wonder, and the other, steeped in Hollywood history. 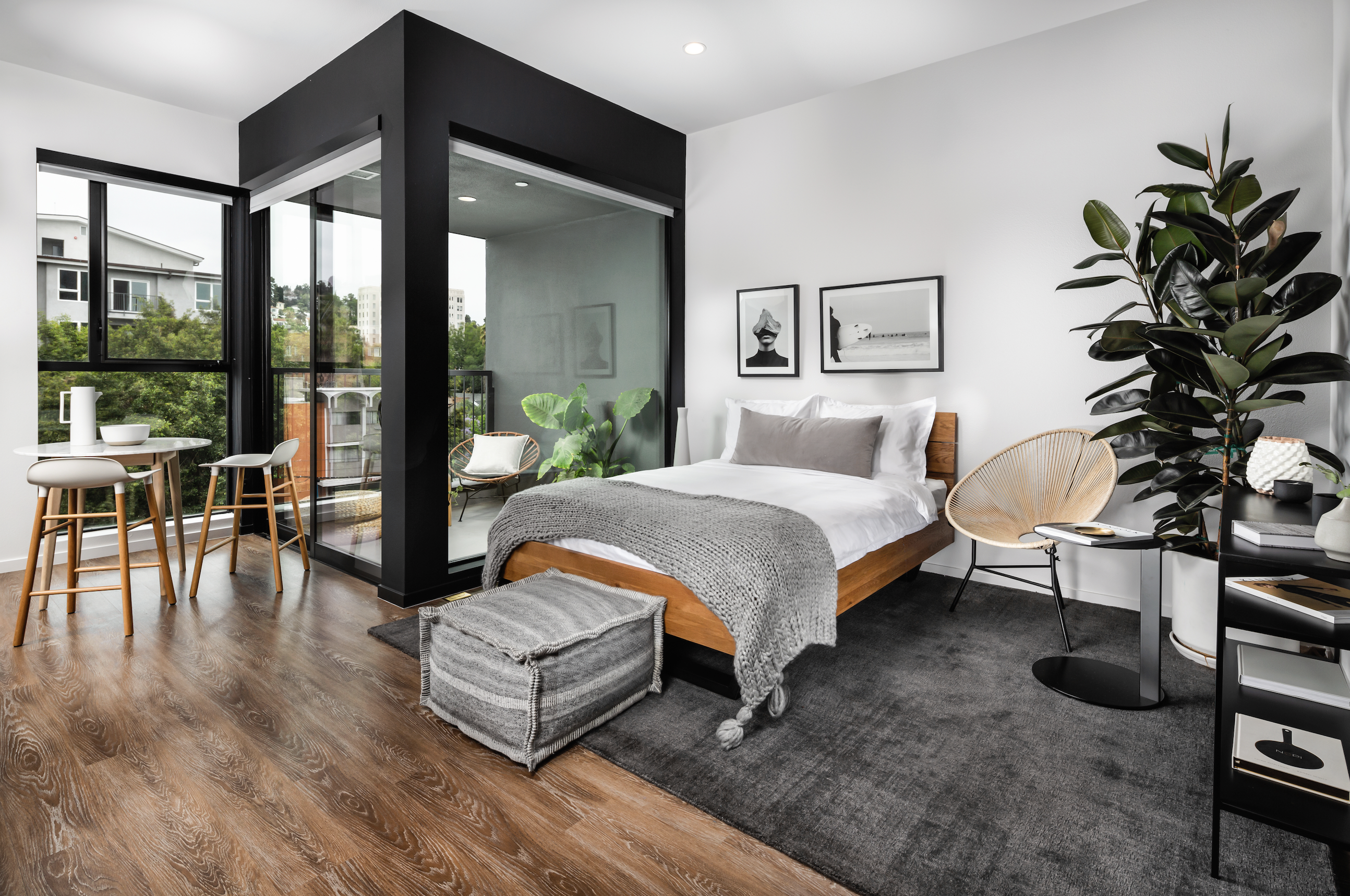 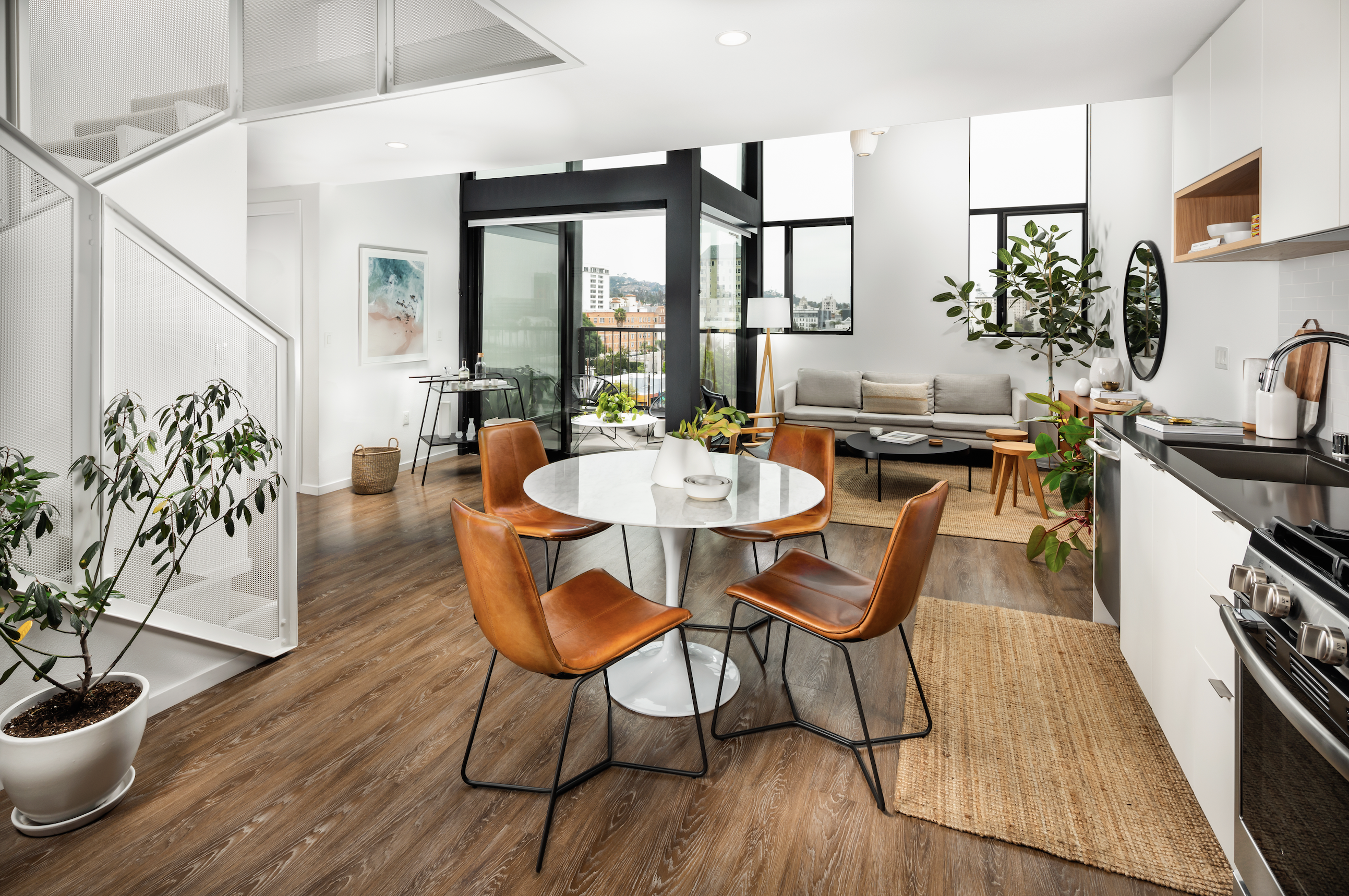 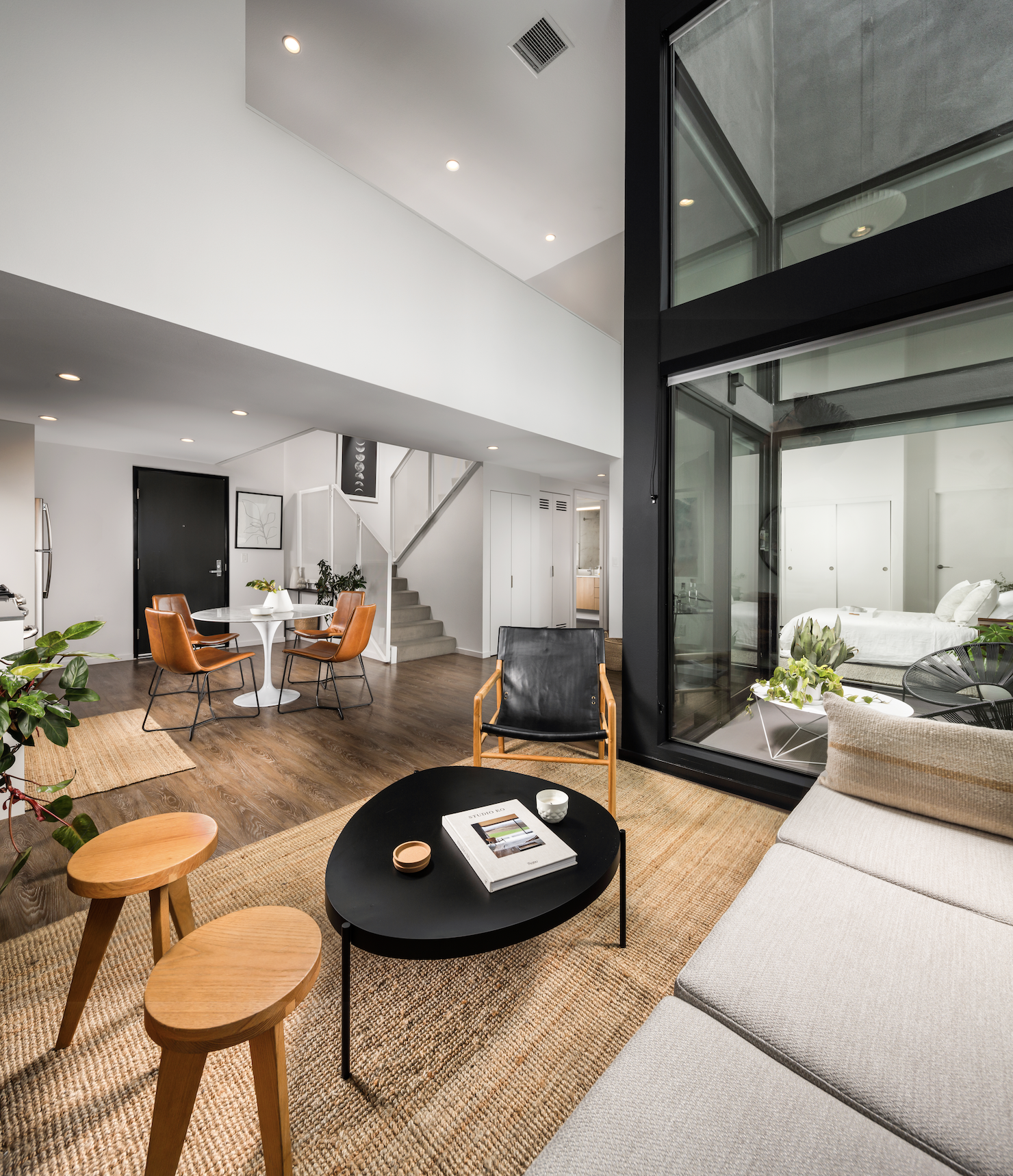 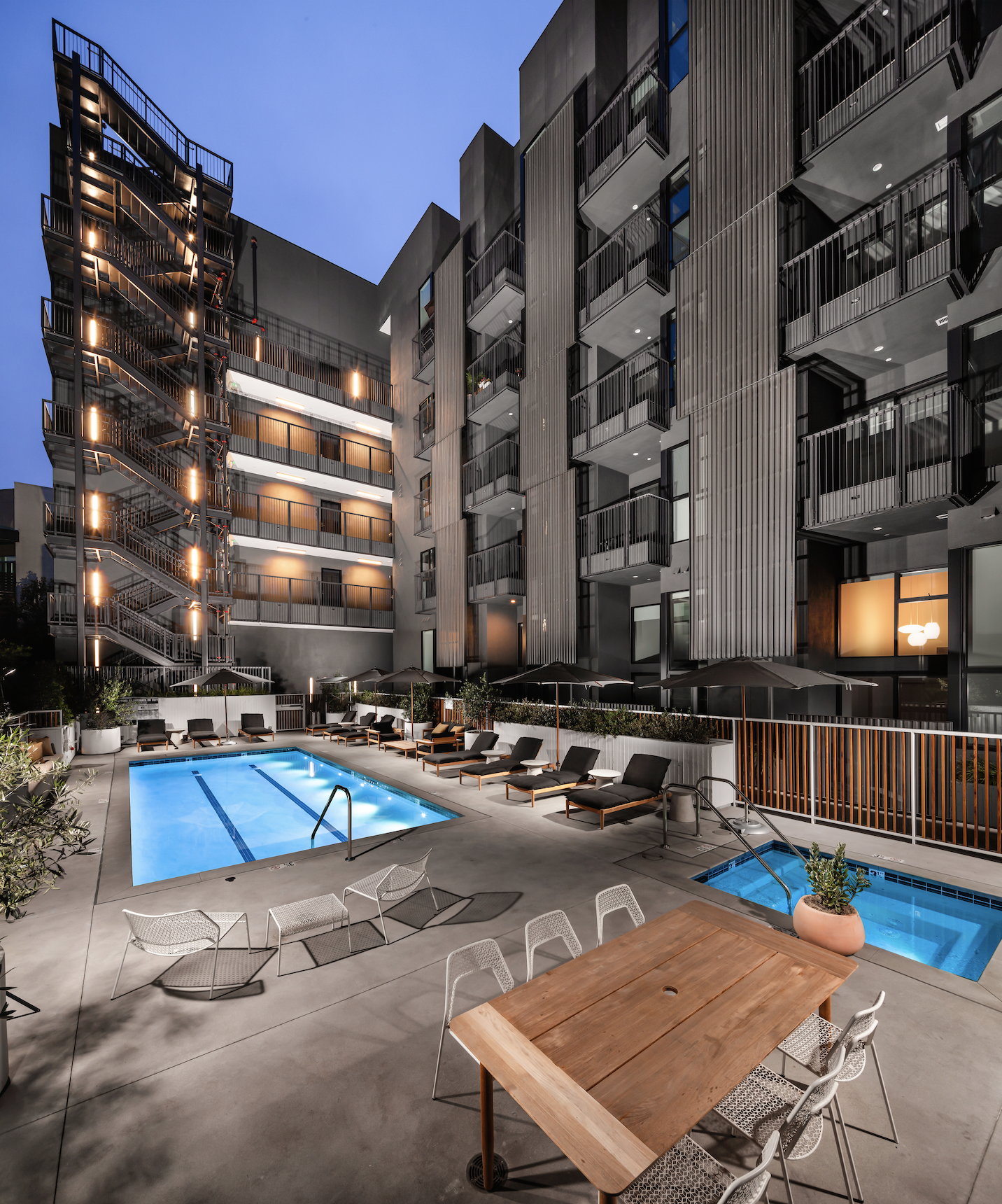 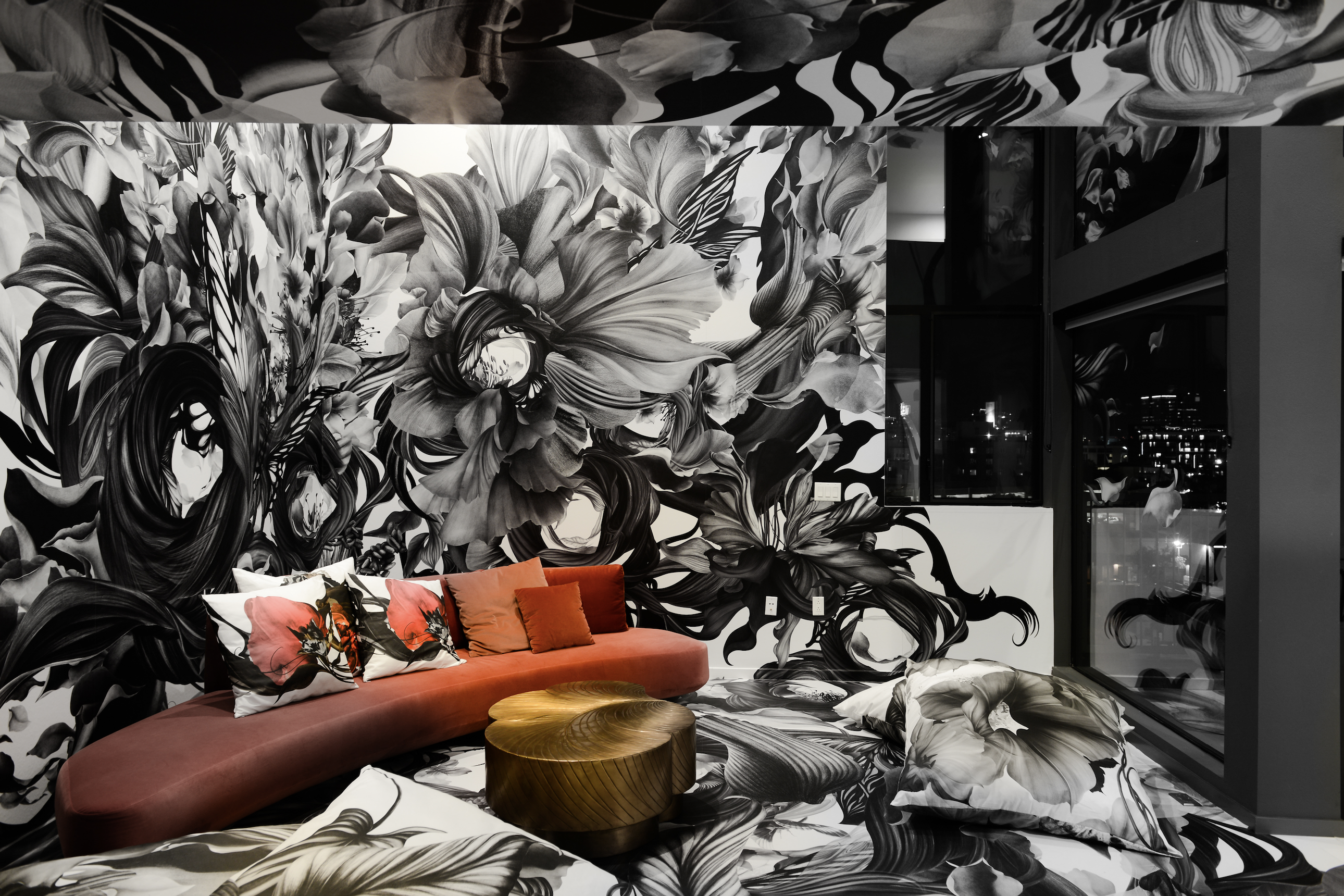 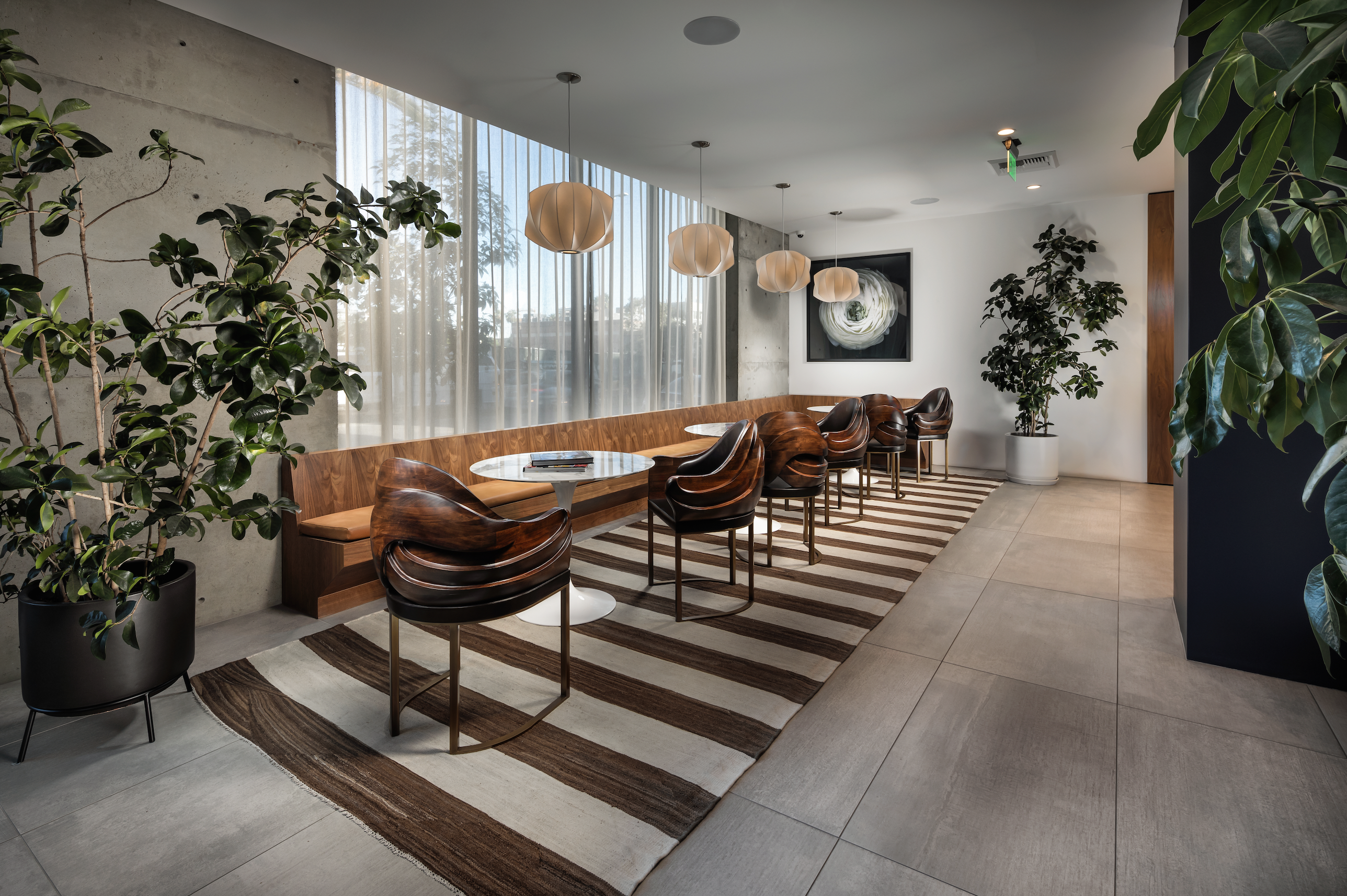 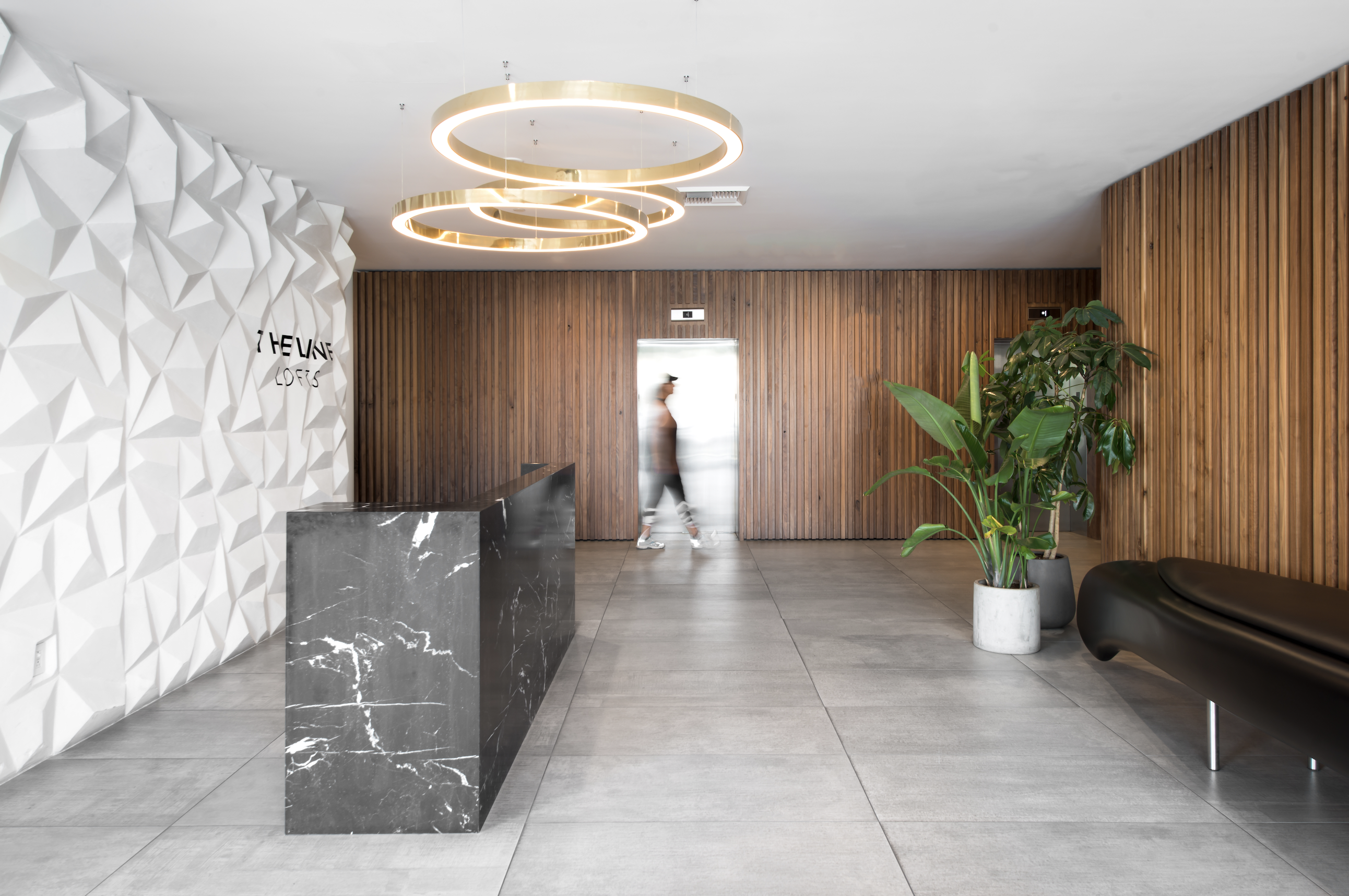 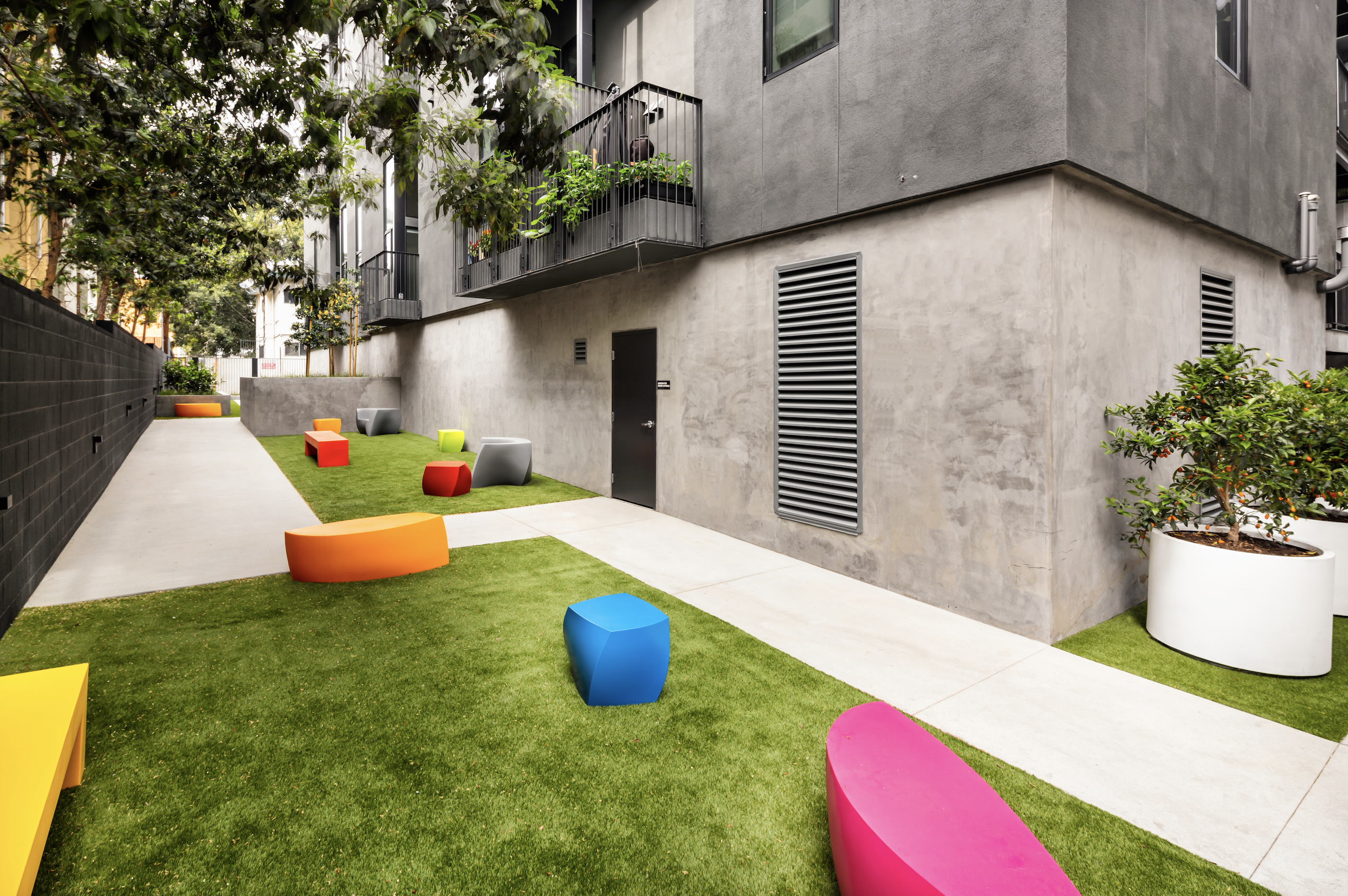 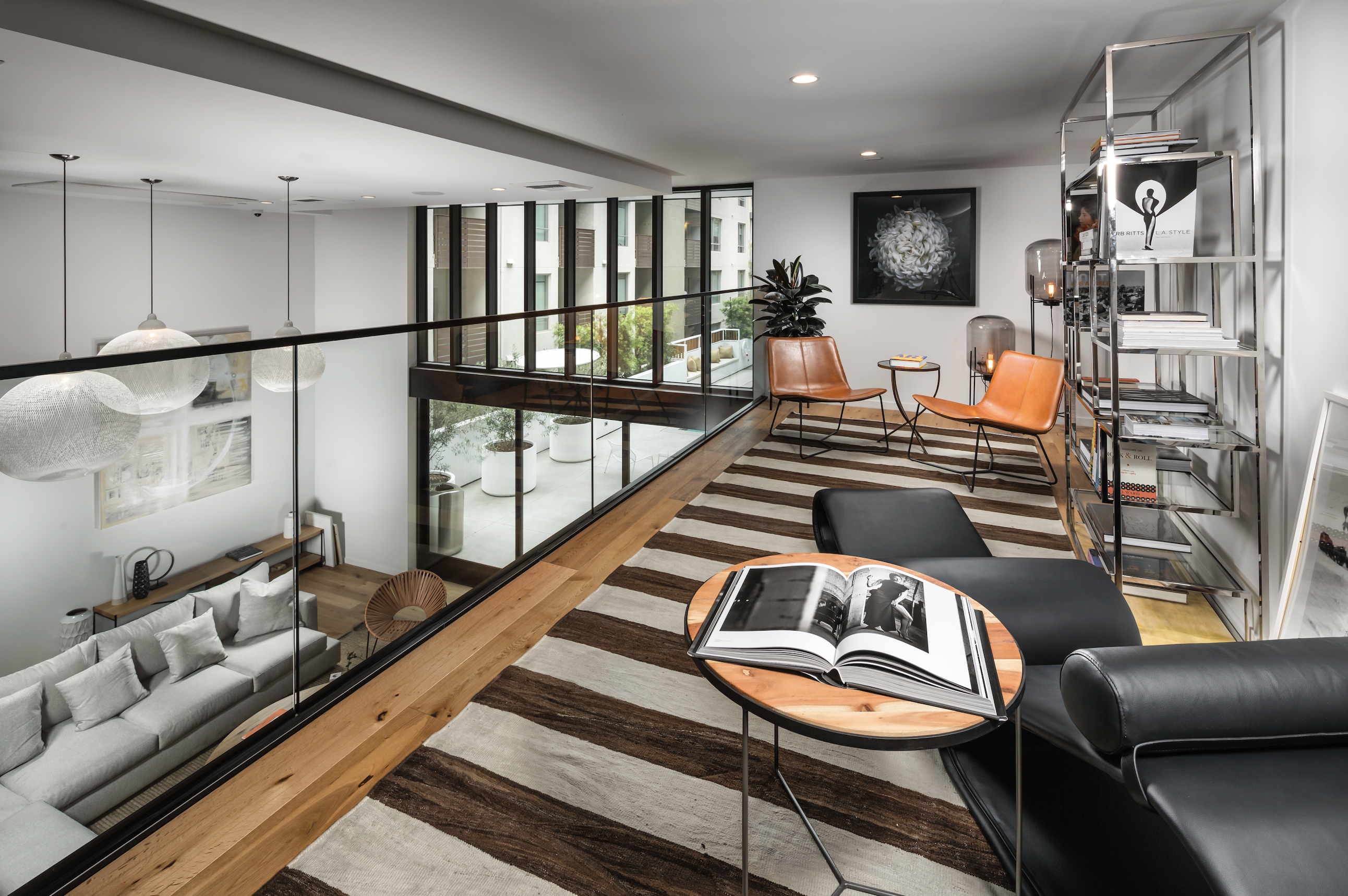 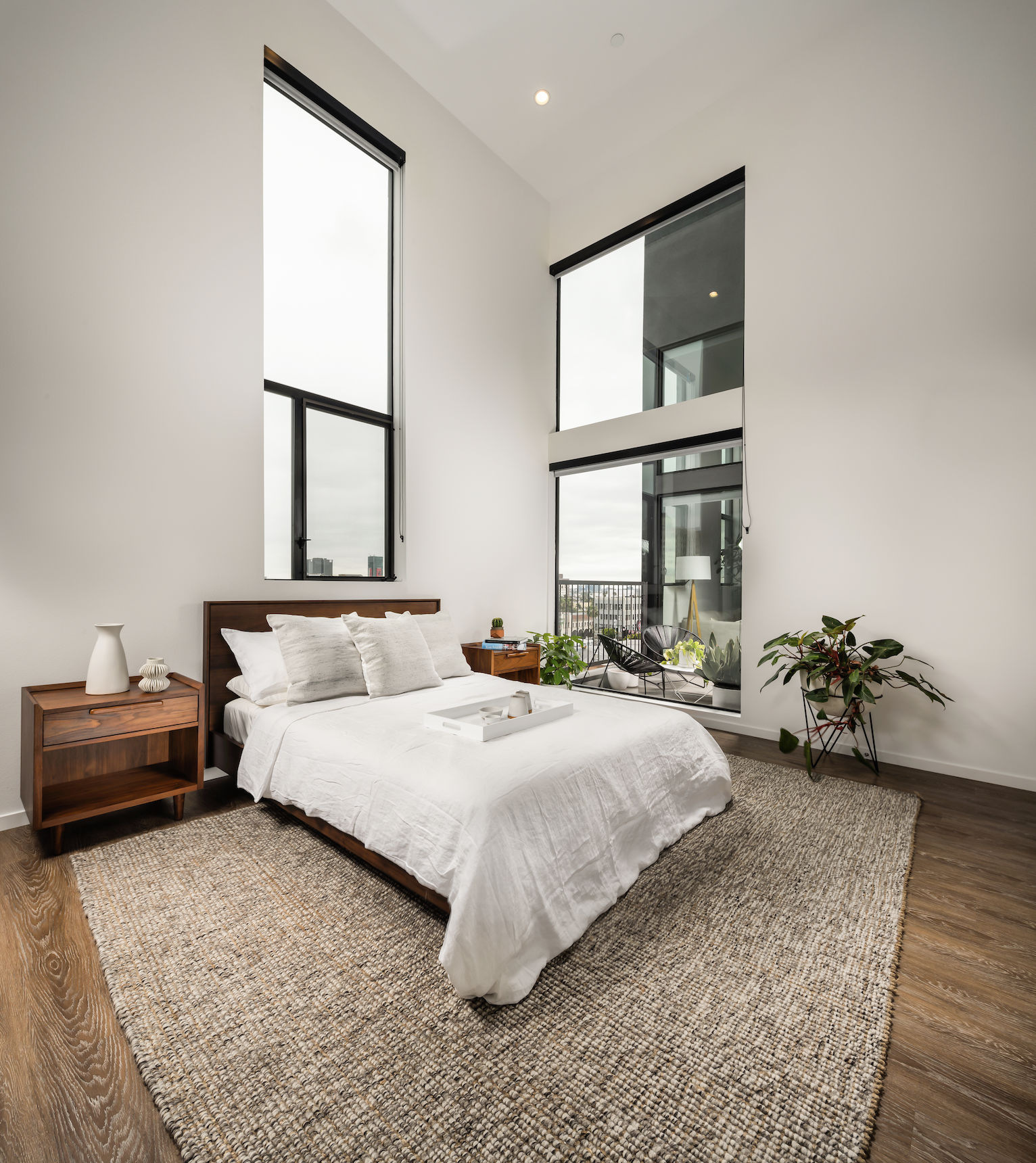 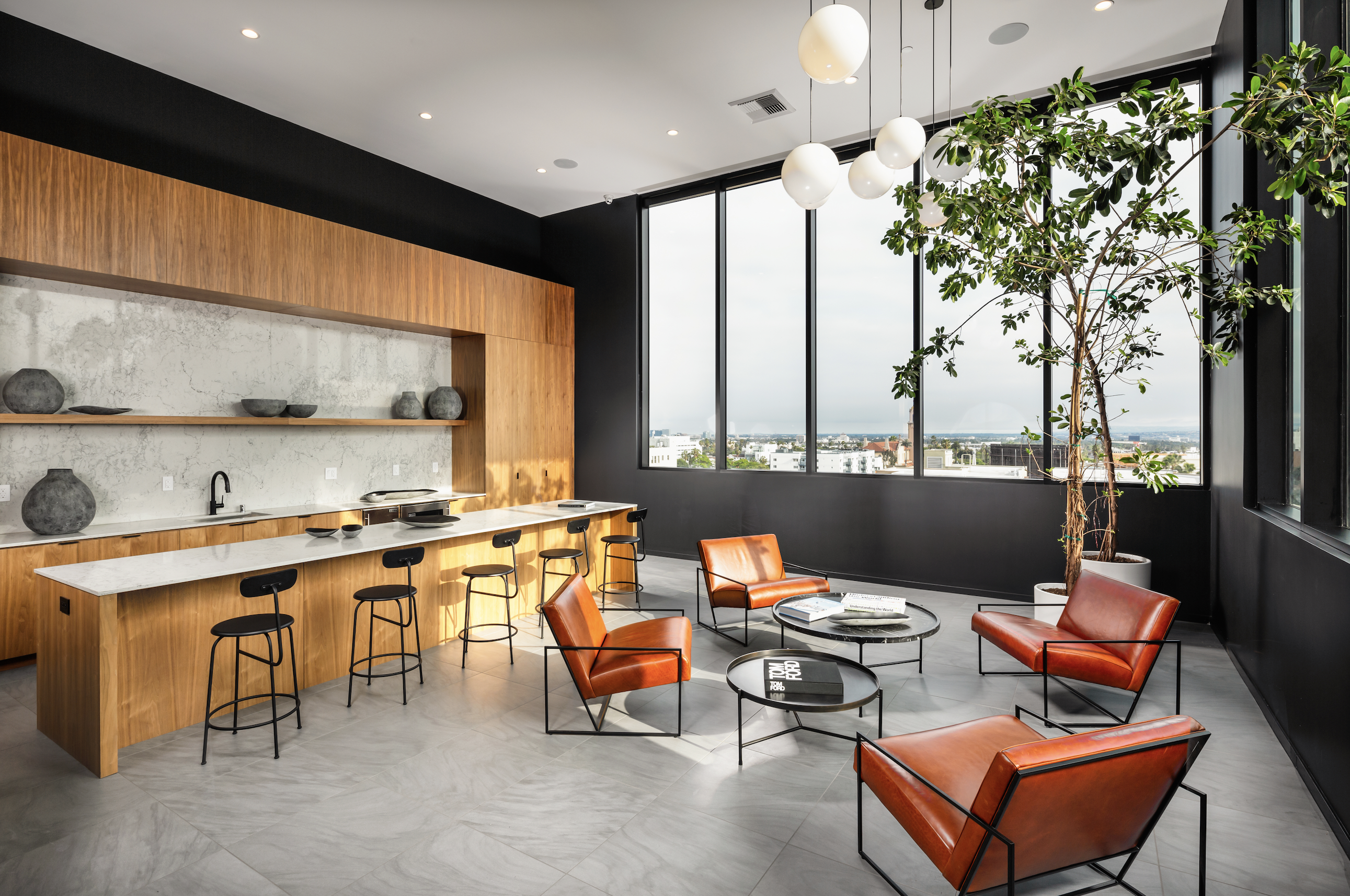 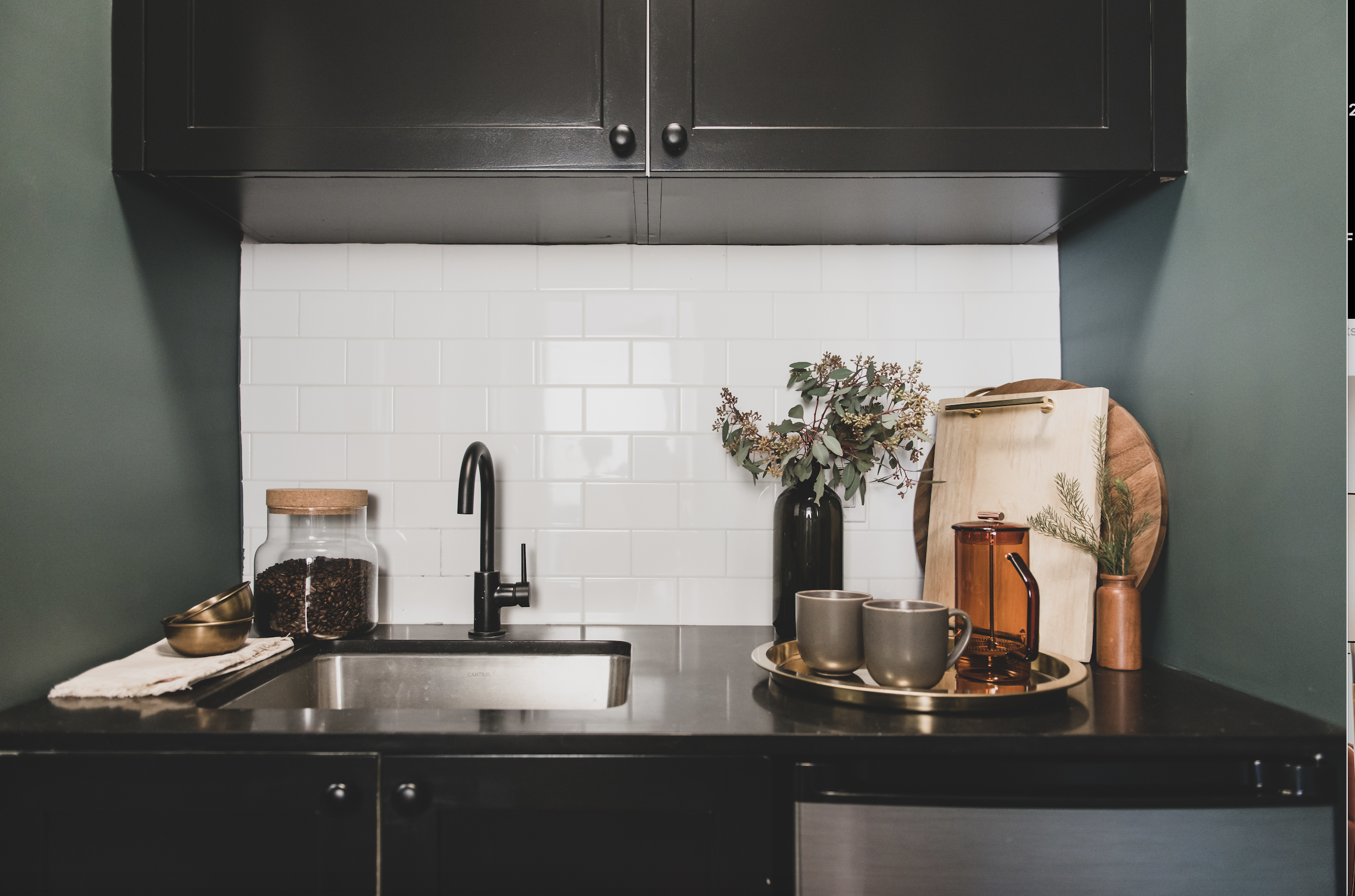 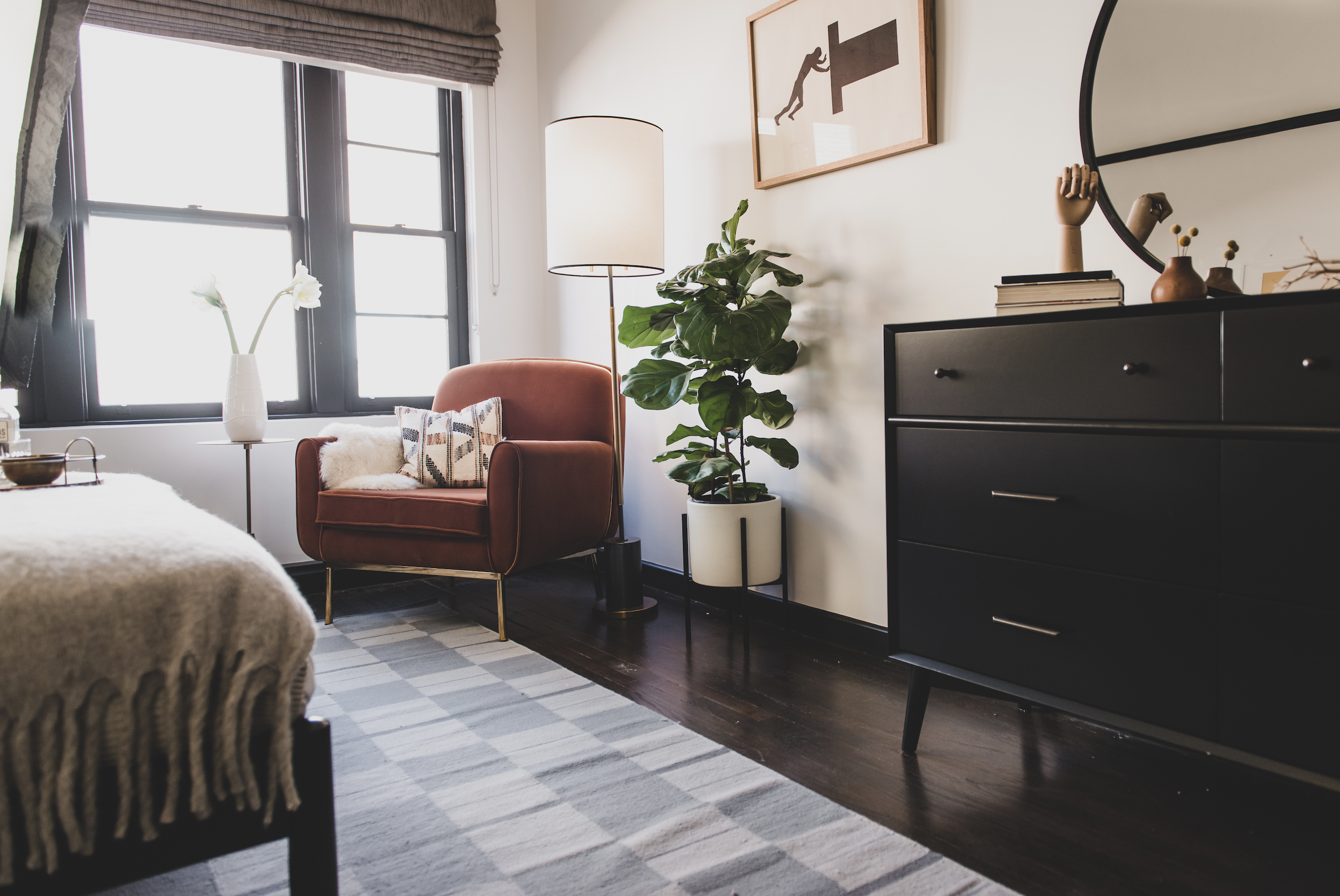 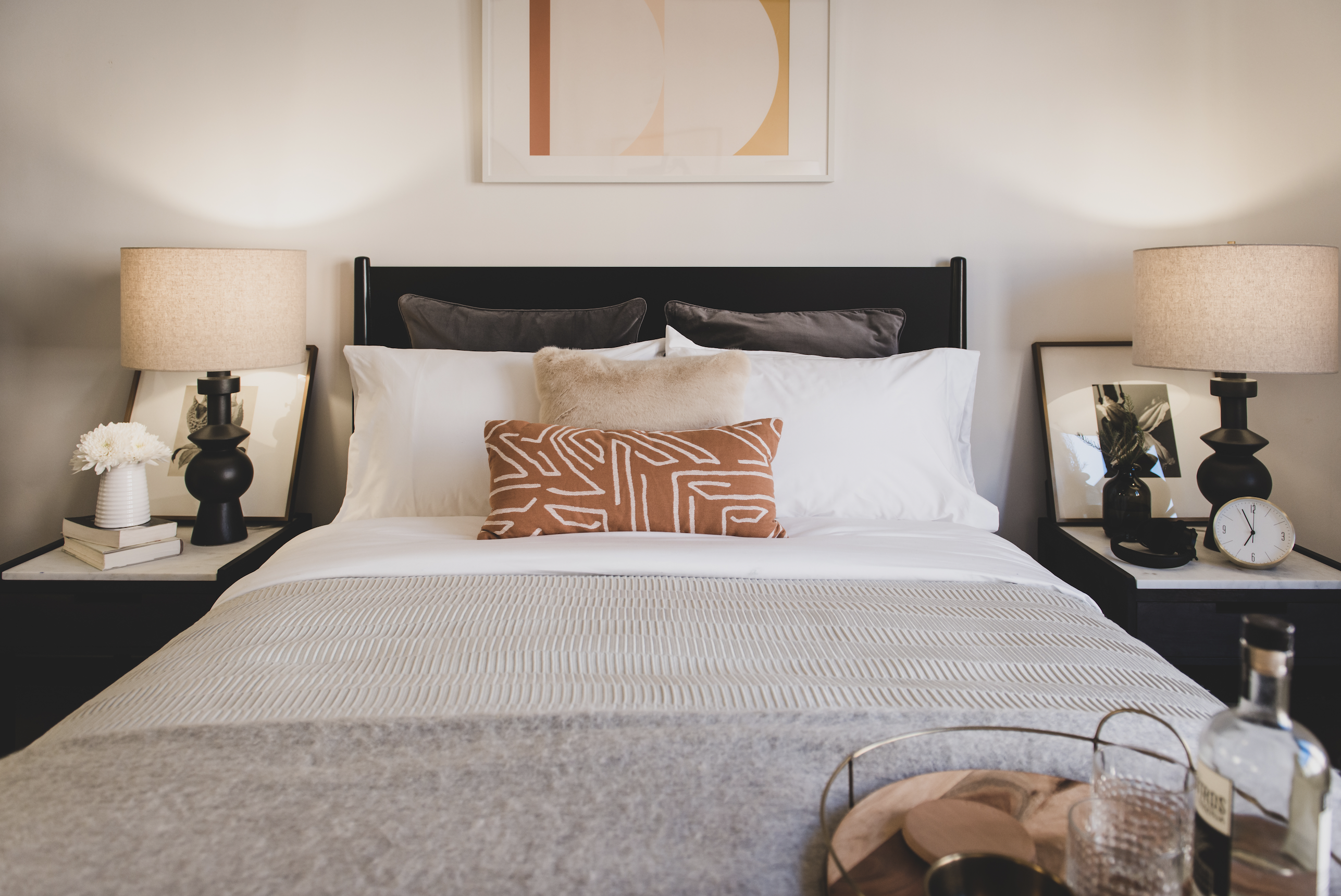 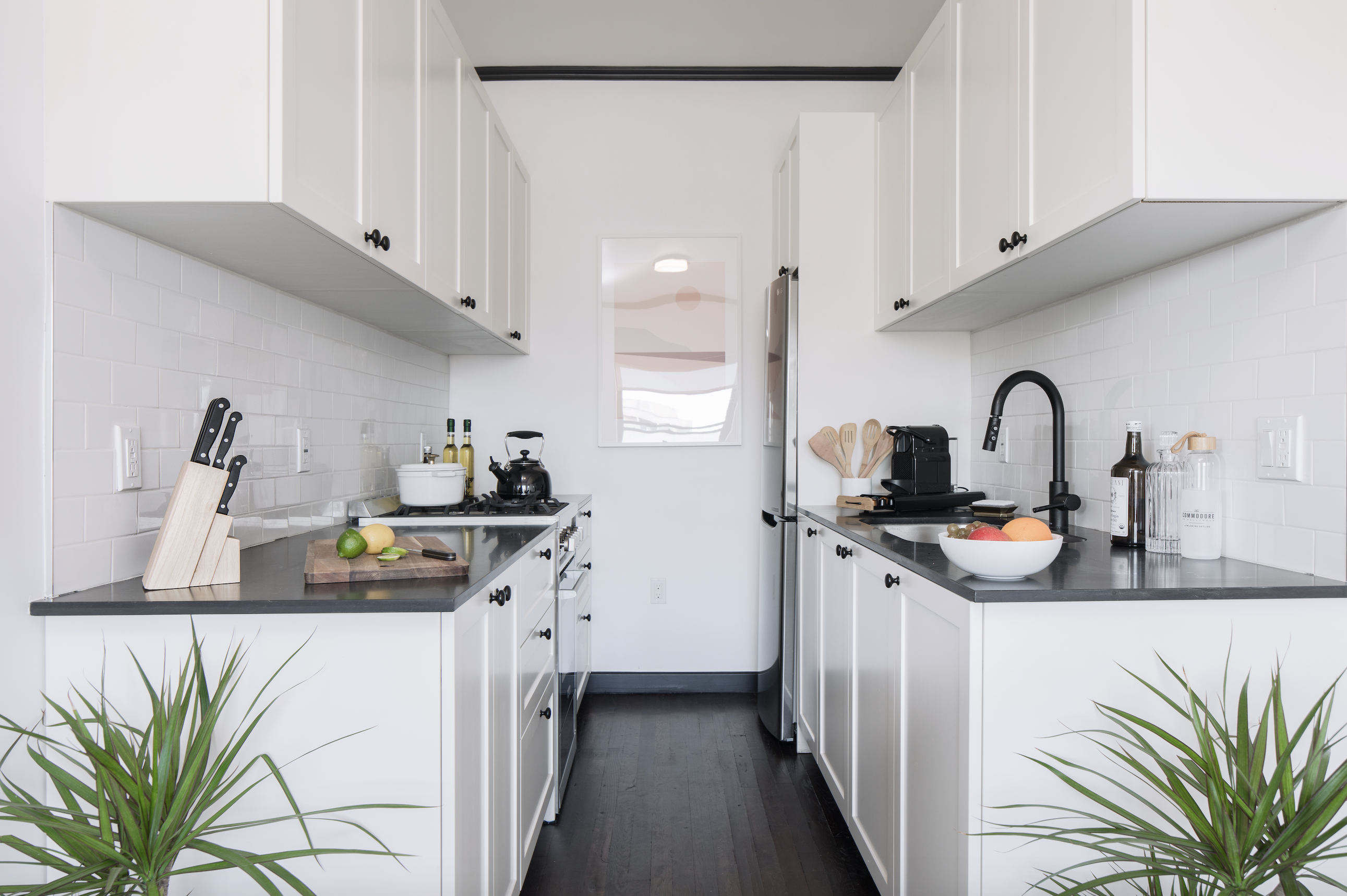 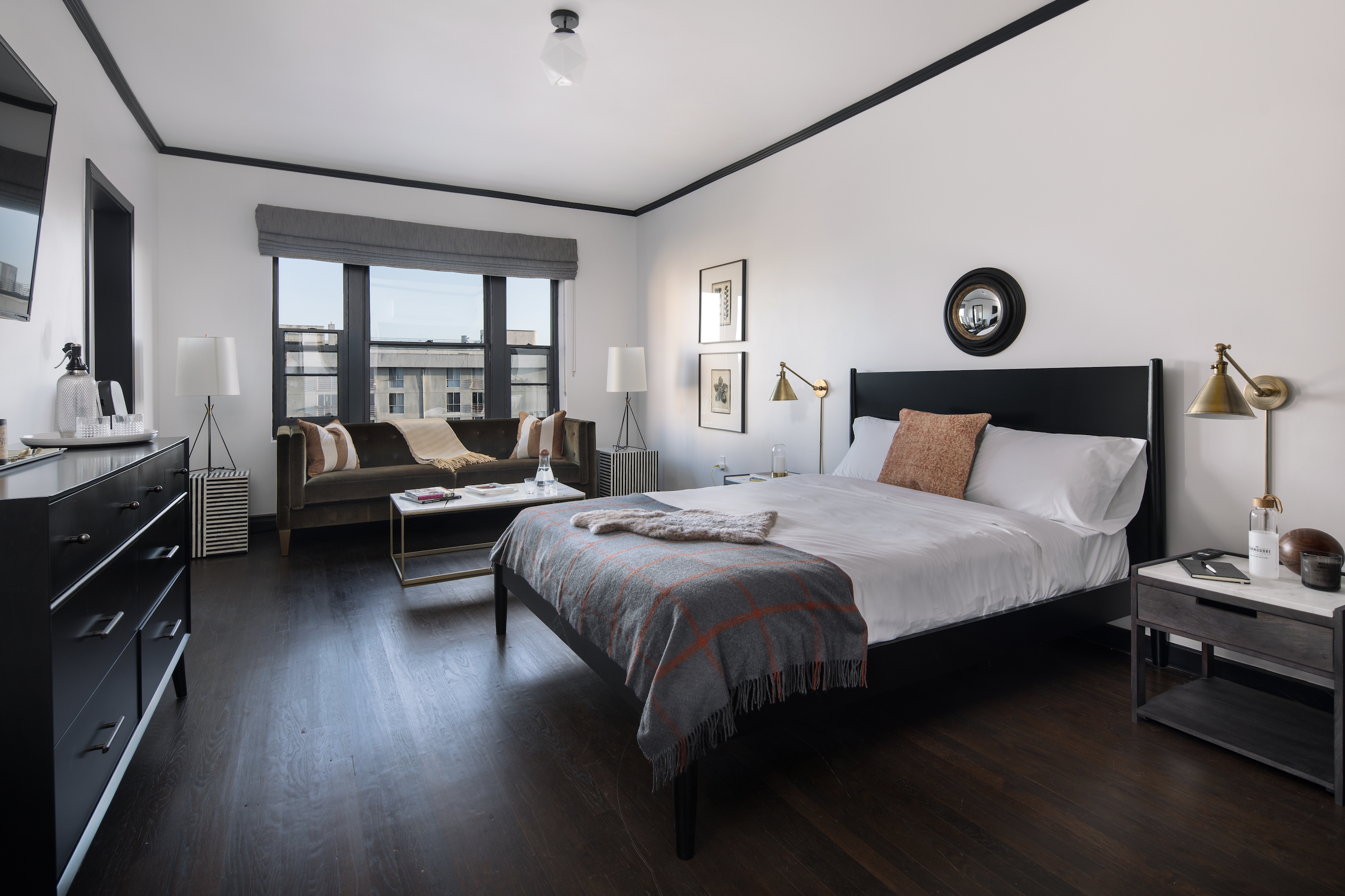 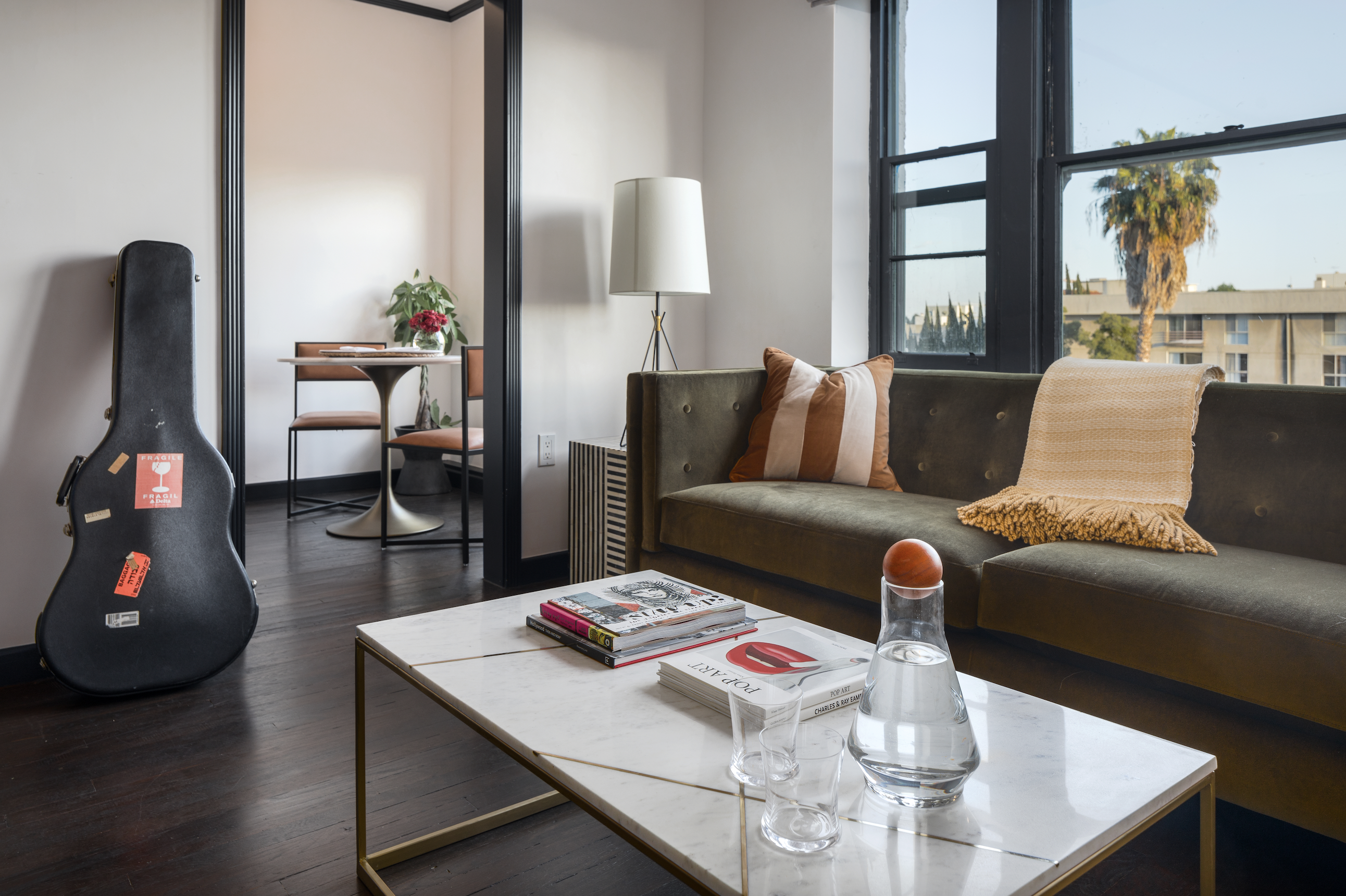 The Commodore of Hollywood Photography by { Mark Singer

“Zoltan Pali and the award-winning SPF:architects are known for creating beautiful, one-of-a-kind, modern structures with linear design,” says Alan Nissel, principal of Wilshire Skyline. “Zoltan fashioned the building’s simple elegance perfectly with clean lines and expansive, light-filled spaces both in units and throughout the building. Once constructed, the goal was to ensure the building felt warm and inviting, while remaining sophisticated and unique, which resulted in Gulla being brought on to round out that vision.”

The six-story building consists of 82 residential lofts and flats (studios as well as one- and two-bedroom, pet-friendly residences) ranging from 415 to 1,477 square feet. Among the architectural highlights are floor-to-ceiling glass-cubed patios that seamlessly blend the transition between indoor and outdoor living. The second and sixth floors feature lofted residences with 16- to 20-foot ceilings, while the third through fifth floors feature flats with 10-foot ceilings. For Pali, founder and principal at SPF:architects, it was important for each residence to optimize natural light and showcase the surrounding views spanning the Downtown and Westside skylines, as well as the nearby Hollywood Hills. The design, inside and out is a home run, evidenced in part by the building’s popularity, but also by virtue of it winning multiple local and national design awards.

“Most importantly, I believe that the units are unique because we spent a tremendous amount of time to make [them] function efficiently,” Pali says. “In addition, we attempted to introduce elements within each unit that [might typically be found in] a custom home. For instance, we utilized the outdoor private open spaces—the decks—and thought of them as little atria. This simple move completely changes the character of a 415-square-foot unit where the outdoor space would normally feel [separate from] the interior.”

As for the overall exterior of the building, Pali envisioned a project that would visually capture the rugged industrialism that pervaded the area prior to the golden age of Hollywood. “We were not interested in the glitzy, Academy Award-happy Hollywood type of thing, but perhaps more what you might find in the back lots or in the sound stages—or even in the light manufacturing that L.A. used to be surrounded by—in a film noir sort of way,” he says.

The Line Lofts provide a quintessential California modern lifestyle, with rates ranging from $2,500 to $8,995 per month, and are available either furnished or unfurnished. The wide range of furnishing packages includes contemporary pieces inspired by Jónsdóttir’s design.

Jónsdóttir, who aims for artistic integrity in all of her projects, says that The Line Lofts has a sense of flow and movement, thanks to interesting furniture pieces and art walls throughout. “I’m interested in creating poetic modern architecture and interior spaces with sensual and dynamic forms that work in harmony with their surroundings, always echoing the integration of organic beauty and function,” she says.

In addition to furnished room packages, Jónsdóttir’s creativity is also seen in the lobby and amenity spaces. She curated artwork, sourced furniture mostly from small production designers outside of Milan and also designed custom pieces. “The six cuff chairs in the lobby, which are made of hand-carved walnut, brass and leather, are from my limited-edition furniture collection called Heimaland, inspired by my home country, Iceland,” she says. The result is elegant, neutral colors and soft textures that create sophisticated light and earthy retreats.

The many amenity spaces were designed to act as an extension of each home. Of these spaces, The Sky Lounge, an Instagram-worthy, penthouse-level lounge, features double-height ceilings and windows framing unobstructed views of the city.

“The project is a very high-end residential project with wonderful amenity areas, and the pop-up penthouse has a fantasy feeling, almost like a Hollywood stage for people to live in,”  Jónsdóttir says. “The penthouse is over 800 feet of living space showcasing the work of Japanese artist Ka-hori Maki and her collaborator, Shiho Minami. Playing off of nature and drawing from human energy, the pop-up suite immerses its guests in a visual sculpture garden of black and white hand-sketched floral drawings printed on large-scale wallpaper spanning across the walls, floors, windows and ceilings. A striking Indian red velvet couch designed by Italian architect Massimo Castagna for Gallotti & Radice, and brass hand repousse leaf cocktail table by Robert Kuo dazzles in the living area. A Robert Kuo six-petal brass and black lacquer top dining table mirrors the floral design in the kitchen area.”

Other amenity spaces include The Retreat, an indoor/outdoor recreation center with full kitchen and lofted library adjacent to the pool and spa deck; The Wellness Spot, a lobby-level gym; and ground-floor retail soon to be occupied by Compelling Coffee. The main lobby, meanwhile, features a three-dimensional sculptural wall designed by Jónsdóttir and made by plaster artist Guerin Swing. “For the lobby, I wanted it to have a sophisticated urban hotel feeling as soon as you walked in, with an oversized canoe bench by Bianco Bianco, brass light fixtures, and unique furniture and art,” Jónsdóttir says.

Overall, Jónsdóttir’s design concept for The Line Lofts is one that she describes as “living in art.” Specifically for the penthouse, she wanted the art to take over the architecture to see how people would interact with the space. Art also takes center stage throughout the property’s corridors and outdoor spaces with imagery by L.A.’ photographer Jesus Banuelos.

“Gulla curated the project masterfully, paying careful attention to draw from local talent and tastes,” Nissel says. “Her furniture and custom pieces are chic and powerful, making a statement and leaving a lasting impression. The final result at The Line Lofts is a collection of thoughtfully designed spaces and rich culture reflecting the heart of the city.”

The Line Lofts site holds 45 years of family history for Wilshire Skyline, so it was important to the team to create a property that would stand the test of time while also elevating Hollywood as one of the most desired neighborhoods in Los Angeles. “The surrounding neighborhood is creative, electric and cohesive,” Nissel says. “We wanted to reflect its vibrant personality at The Line Lofts through collaborative spaces and thoughtful design to foster a strong community and culture with long-standing residents.”

History in the Making

Wilshire Skyline’s newest project, The Commodore of Hollywood, is the result of an estimated $10 million renovation that restores the historic Hollywood landmark to its former glory—with the addition of modern luxuries and hospitality benefits. The property, which opened in 1927 as the movie industry took hold in Los Angeles, was home to numerous entertainment figures over the years, including the infamous Robert Vaughn, Clara Blandick, Aubrey Scotto, Addie McPhail, Ernest (Ernie) Adams, William Edmunds and Matthew Boulton. The building also was a favorite hangout for Hollywood stars and musicians, including the rock band KISS (three of whose members resided at the building).

This directive meant highlighting unique architectural details, such as the once-concealed ornate entry portico, its expansive detailed molding and its dramatic arched openings. The expanded lobby (now twice its original size) also revealed terrazzo beneath four layers of flooring that has been impeccably restored. “There are many details that we were able to preserve that give the building a sense of being a time capsule, sustaining nine decades of Hollywood history made up of former old-Hollywood star tenants, some of which were featured in iconic films such as the original A Star Is Born, Casablanca, The Wizard of Oz and more,” Nissel adds.

“This building has beautiful details and a history of welcoming actors to the city,” Watts says. “KFA is heavily involved in adaptive re-use and restoration of old buildings in L.A., so this is a natural fit for us and continues our work in this segment.”

Wilshire Skyline also tapped Christos Prevezanos, founder of Studio Preveza, to oversee the interior design of the lobby, lounge and two residences. While Watts brings a wealth of expertise in adaptive reuse projects, Prevezanos is known for his work on historic projects. “With these two talents at the table, Jonathan and Christos in concert with our team at Wilshire Skyline were able to preserve and restore this historic residential landmark to its former allure,” Nissel says.

The just-opened residential rental community is located one block from the famed Hollywood Boulevard and offers 73 pet-friendly, unfurnished apartments, as well as fully furnished hotel-style accommodations for those looking for stays of 30 days or longer. Prices range from $2,000 to $5,000 per month. The airy studios and one-bedroom apartments range from 350 to 810 square feet and feature central heat and air, abundant natural light, 9-foot-plus ceilings, restored original hardwood floors, new stainless appliances, keyless entry, spacious walk-in closets and separate eat-in kitchens indicative of the era.

“Interestingly, the exterior is not the highlight as it often is,” Watts says. “It is features like fully built-in wardrobes with drawers, mirrors and countertops. This is old-glamour Hollywood. These buildings are classic architecture from an era that is now difficult to replicate with modern construction standards and materials,” Watts says. “Our design philosophy is to stay true to the original architect’s intent. We are all lucky to have clients who are willing to take on the updating and restoration of these buildings. It can be difficult, expensive and time-consuming.”

The Commodore of Hollywood, as well as The Line Lofts, offer hospitality benefits including concierge services, complimentary morning coffee and tea, programmed events and amenities such as Wi-Fi in all common areas, controlled access parking, rent stabilization, courtesy patrol, a private dog park and more. Furnished stays of 30-plus days also receive biweekly housekeeping, amenities kit and mini-bar stocked with locally made treats. Also distinct to these buildings are special programming, such as Sky Talks that take place in the Sky Lounge (a la TEDx Talks) and soon-to-be-announced local collaborations.

Nissel is excited to debut these two residential properties in Hollywood. “The Line Lofts and The Commodore of Hollywood are two communities that add rich Hollywood history to our Wilshire Skyline portfolio and integrate our family-owned, Los Angeles-based company deeper into the fabric of the city,” he says.