As Riverdale's Madeline Petsch prepares for the highly anticipated Season 3, we chat with her about the show, style and life. 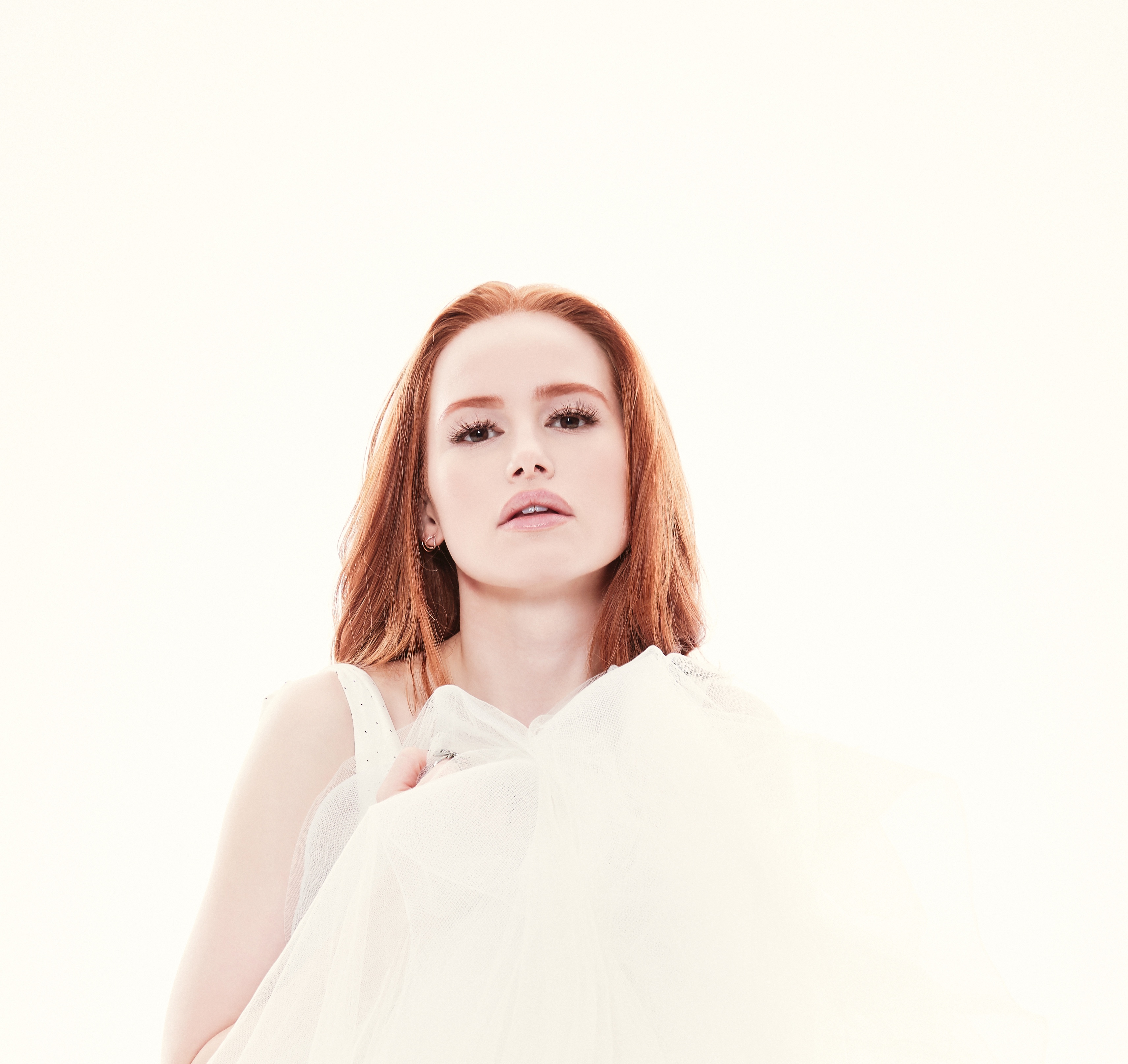 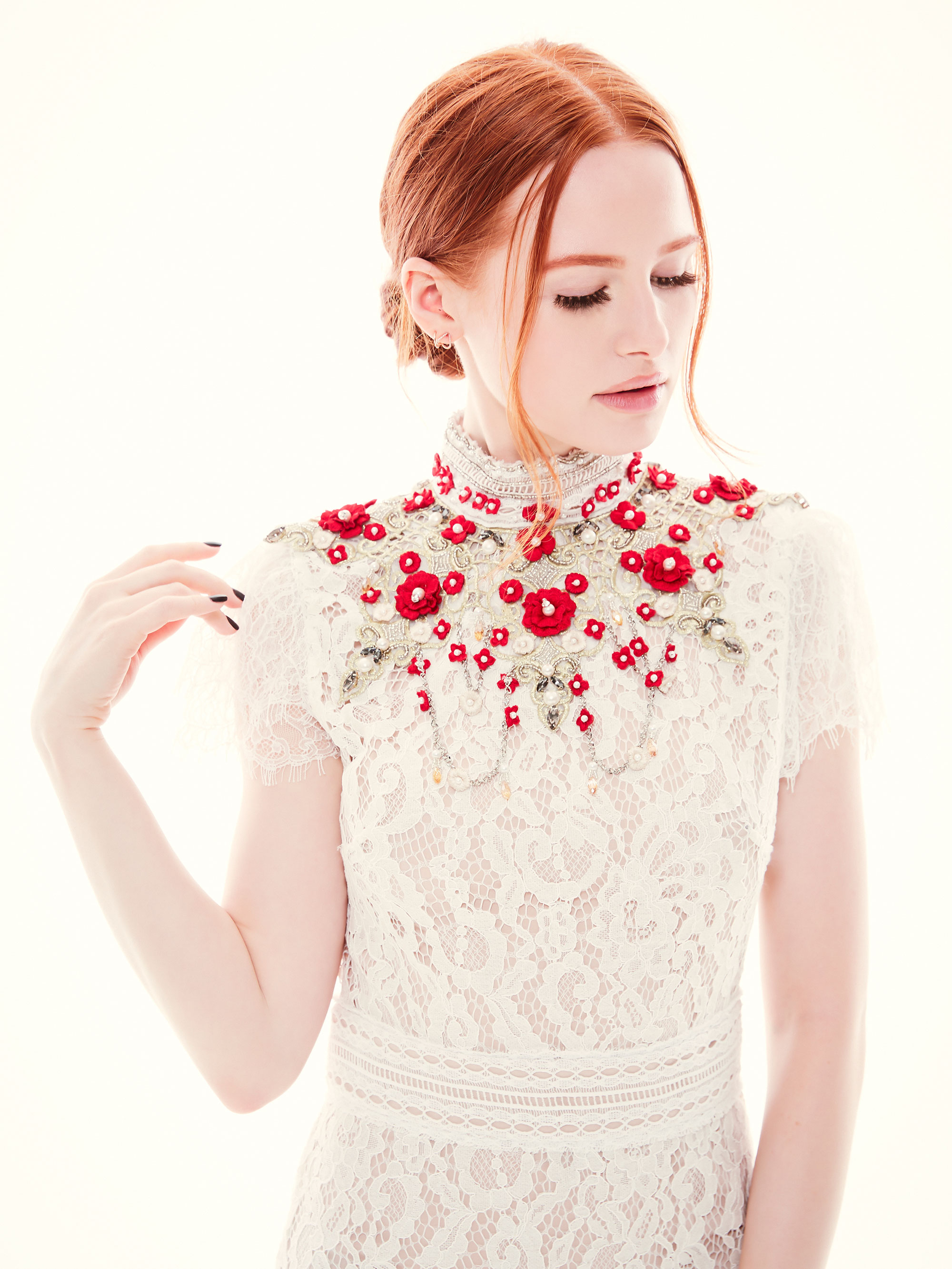 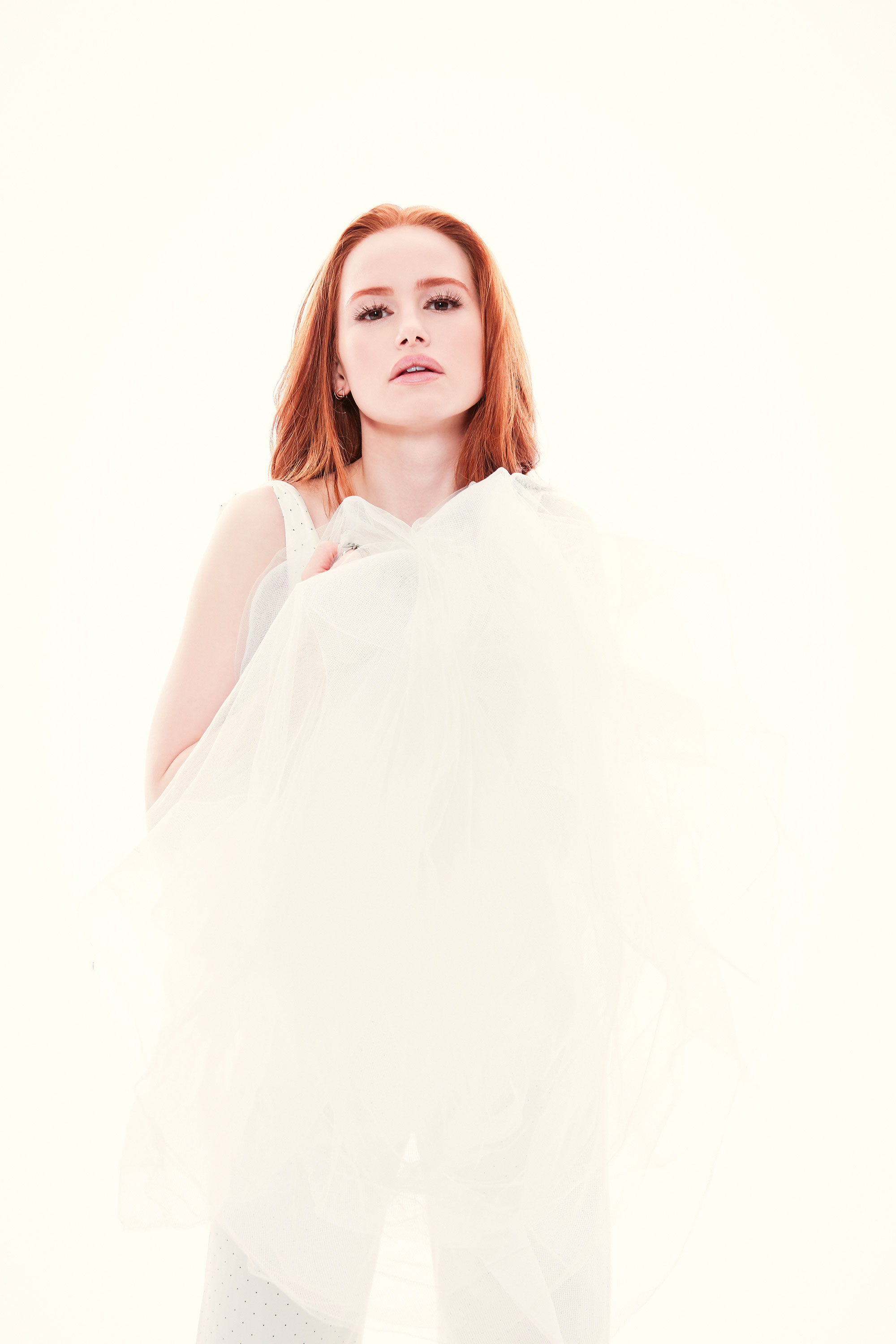 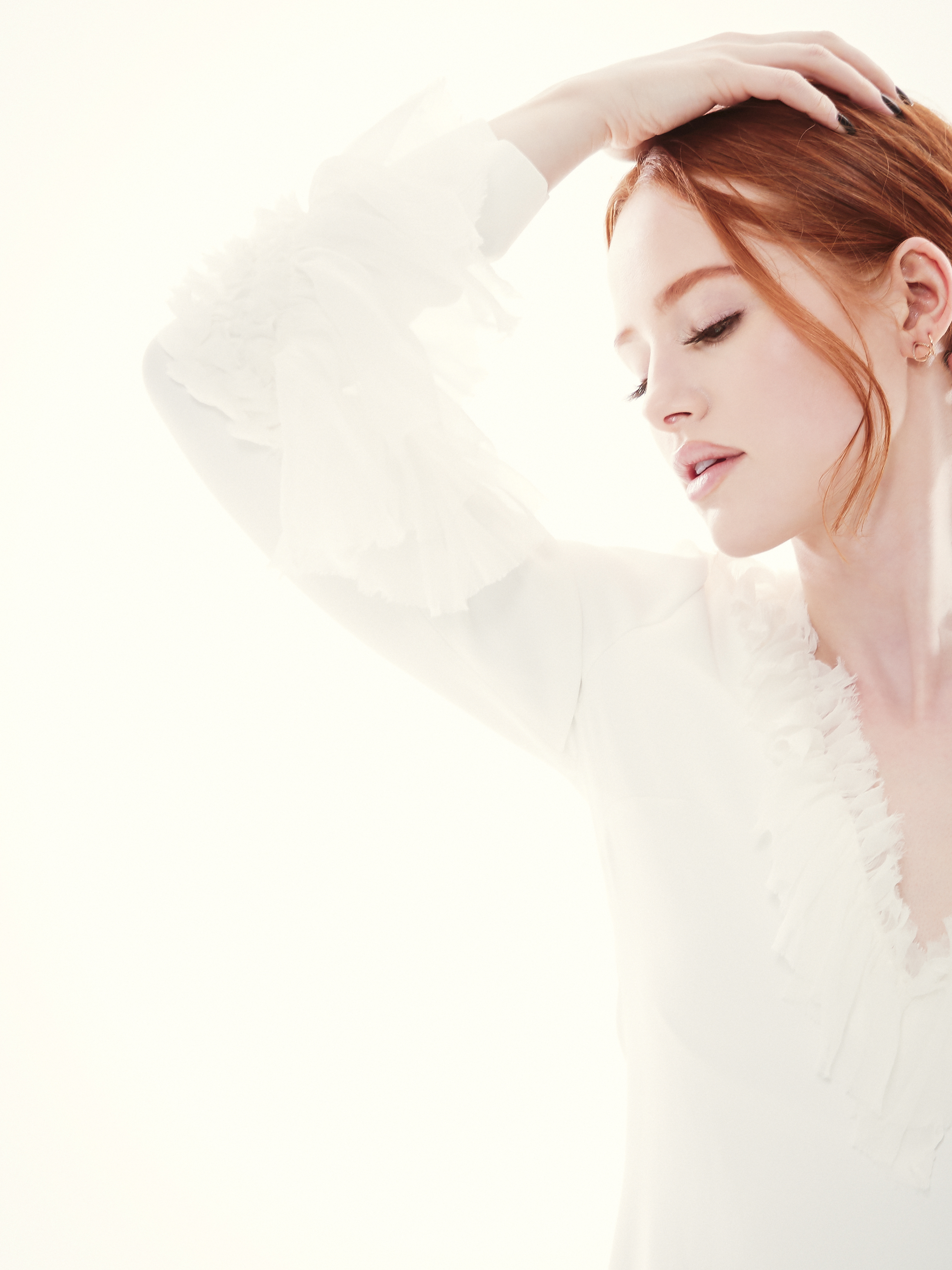 Perhaps this is Madelaine Petsch’s (@madelame) world and we’re all just living in it. The 23-year-old actress’ teen drama Riverdale was just renewed by The CW for a third season. Her Privé Revaux capsule collection of sunglasses dropped this spring and sold out immediately … twice. And she has more than 8.7 million followers on Instagram who patiently await her every fashionable move.

And Petsch does not disappoint. Her feed takes fans behind the scenes at photoshoots, awards ceremonies, dates with her boyfriend (recording artist Travis Mills) and even downtime with her Riverdale castmates. The wildly successful series, which boasts a dark, campy aesthetic and a soundtrack that mixes retro tracks with contemporary ones, is based on characters from Archie Comics, mainly Cheryl Blossom (Petsch), Archie Andrews (KJ Apa), Veronica Lodge (Camila Mendes), Betty Cooper (Lili Reinhart) and Jughead Jones (Cole Sprouse).

Petsch spent her childhood traveling between South Africa, where her parents are from, and Washington State. Expressing an interest in performing at an early age, she took dance lessons and theater classes. Following graduation from the Tacoma School of the Arts, she promptly moved to Los Angeles to pursue her career.

Now the actress lights up every one of her scenes by way of her naturally red hair, sharp ensembles—often a dramatic combo of red and black—and convincing portrayal of Cheryl as a rich mean girl (she took home “Choice Hissy Fit” at the Teen Choice Awards last year) who turns out to be far more complicated than viewers could have ever predicted.

Riverdale—and Petsch—are only getting better with time. Season 3 promises to bring more Cheryl Blossom, more cutting-edge fashion, more juicy storylines and, ideally, more behind-the-scenes posts for her Instagram followers. One thing’s for sure: If this is Madelaine’s world, we “like” it.

Despite having its roots in a comic dating back to the 1940s, Riverdale is hugely popular today. What makes the concept and characters translate so well for the current audience?

I think the characters themselves are timeless. The personalities of each character—good and bad, flaws and strengths—and the issues each one has had to deal with are all universal and can be identified within any time period.

Your character, Cheryl Blossom, has a distinctive sense of style. How do you view fashion, and where does your personal style intersect (if at all) with, or diverge from, Cheryl’s?

My personal style definitely has some Cheryl notes to it. I tend to use bold colors as an accent. Just as she goes with red, I like to use red, too, or my other favorite is yellow. I think, if anything, my style is more diverse than hers day to day. I find some days I’ll lean towards a beautiful sundress or mom jeans and a black tee, but other days I’ll put a full outfit together. Cheryl uses her wardrobe as a way to enhance her façade. I use my style as a way to express myself.

You’ve said you were bullied as a kid for your red hair, but now you embrace it and it’s your trademark. At what moment did you begin to confidently own it?

There was no real a-ha moment. It took time and leaving my small town. It honestly was about me growing up and learning how to embrace the things that make me different. Finding the beautiful and unique things about other people helped me appreciate those things about myself.

Riverdale films in and around Vancouver. Had you spent much time there prior to working on the show? Do you have any favorite neighborhoods or local haunts?

Well, I grew up in Washington, so I was familiar with the Pacific Northwest, but I had only been to Vancouver once. No matter where I am in the world I’m a homebody, so I don’t go out much while filming. The nights that I look back on most fondly are the ones where we all get together and hang out at each other’s apartments.

How are you dealing with the show’s popularity? Have you had any memorable encounters with passionate fans?

It actually hasn’t been too crazy. I’m lucky enough to have a really solid support system through family, friends and my boyfriend, as well as a cast that is going through this together, so we all help each other. I would say every encounter is very memorable for me still, since I’ve only had fans for a year and every single one of them has been so passionate about the show and the work we do. Every day I feel so lucky to be on a show with such a strong and passionate fan base.

No discussion of Riverdale is complete without mentioning its incredible soundtrack. What genre or artists do you listen to at home?

Honestly, I listen to everything. And my boyfriend is a musician so, typically, I lean on him for music decisions around the house.

Are you still a vegan?

I’ve been plant-based my entire life, and I still am. My passion for the planet and health drive that decision.

What are some of your favorite vegan restaurants in L.A. and beyond?

I love Sage right now; Veggie Grill is always a good go-to in L.A. There’s a place called Plumb in Seattle that I love. I also really enjoy cooking at home.

What do you do to relax and unwind when you’re off duty?

I’m really big on self-care. My version of a relaxing day is going to the gym, making a nice meal for my boyfriend and, before falling asleep, watching Silicon Valley.

Do you enjoy traveling?

The more of the world you see, the better rounded human you become, since you have the opportunity to see all walks of life. I feel very lucky to have grown up traveling as much as I did and still do. I love traveling and I’m appreciative of these experiences.

There are a lot of places I would still love to see in the world, but right now I am really feeling a staycation somewhere in California. Exploring Big Sur and staying at the stunning Post Ranch Inn sounds dreamy.