From PGA pros to Olympic athletes, NASA astronauts to Hollywood icons—the elite keep track of hours and minutes with a watch from Omega, the nearly 150-year-old Swiss company with an extremely loyal fan base. 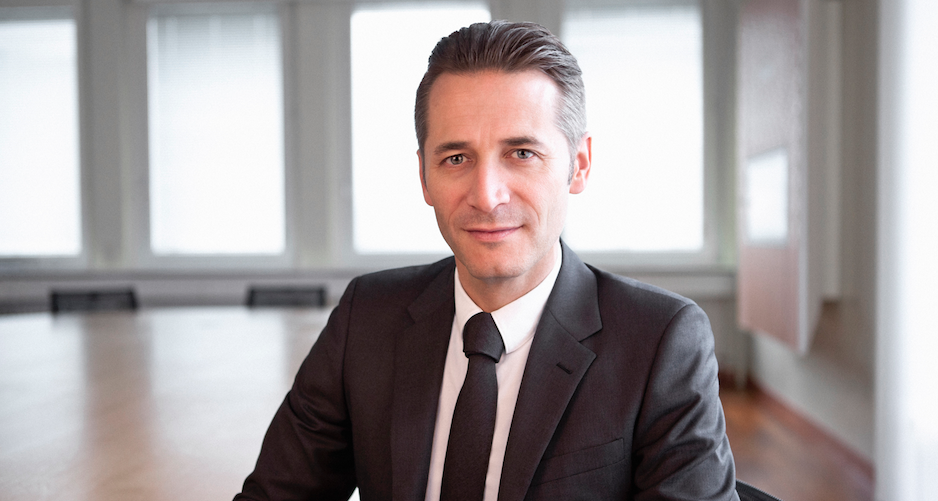 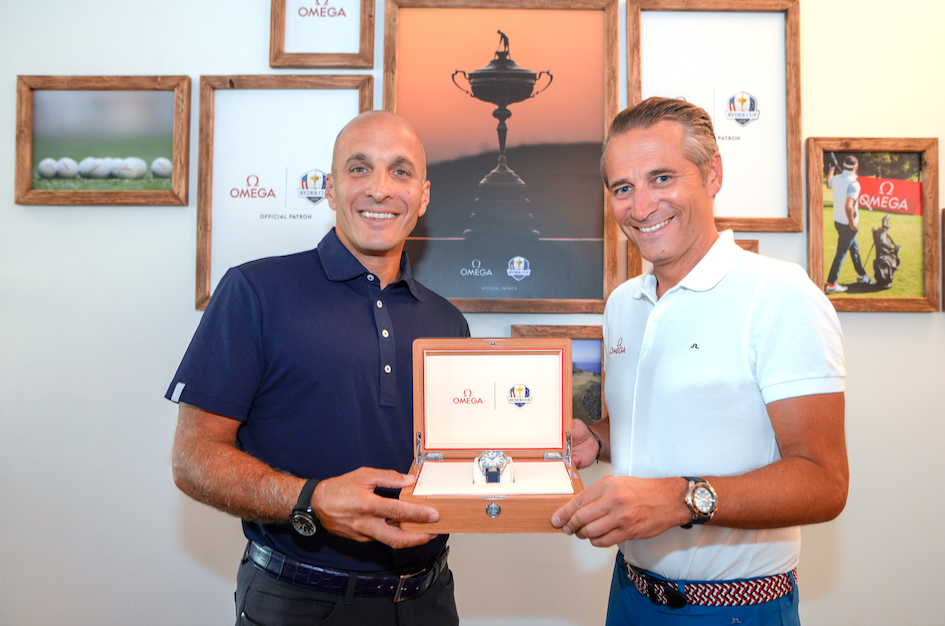 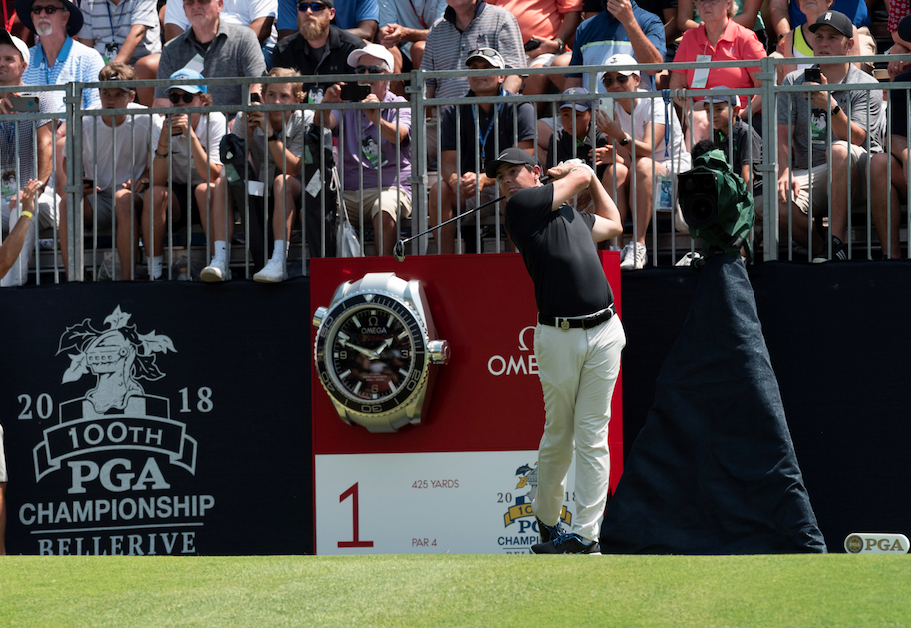 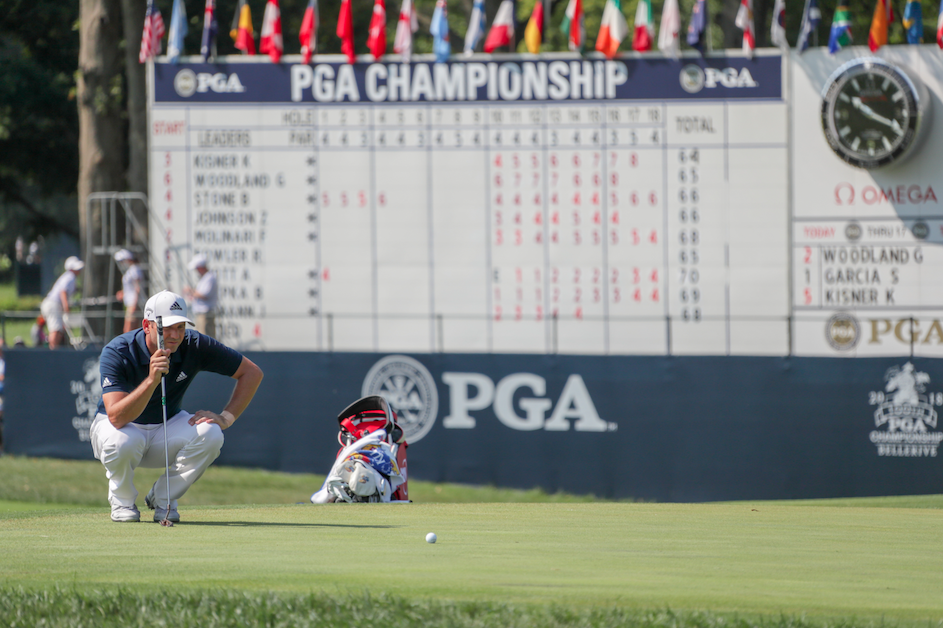 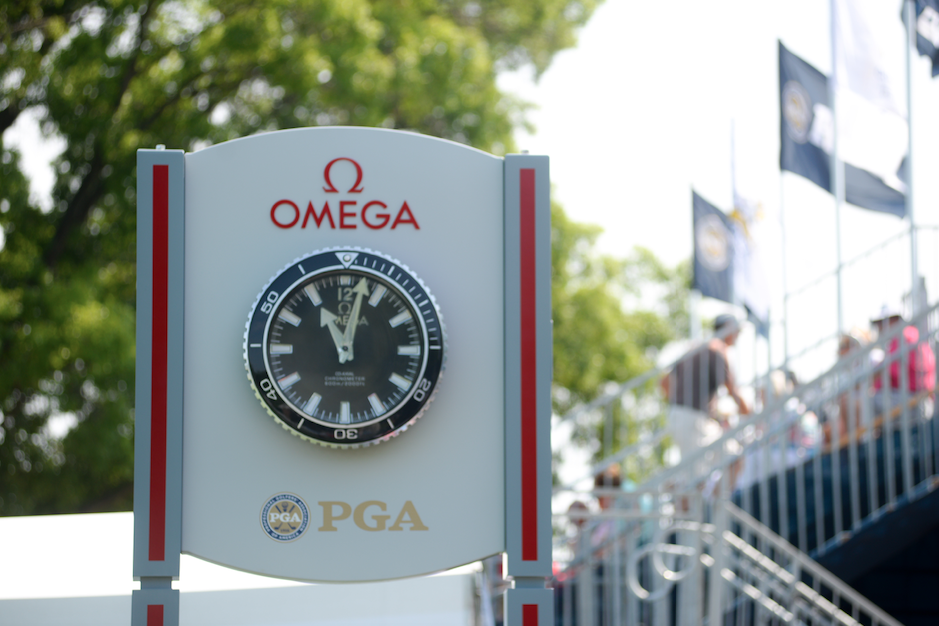 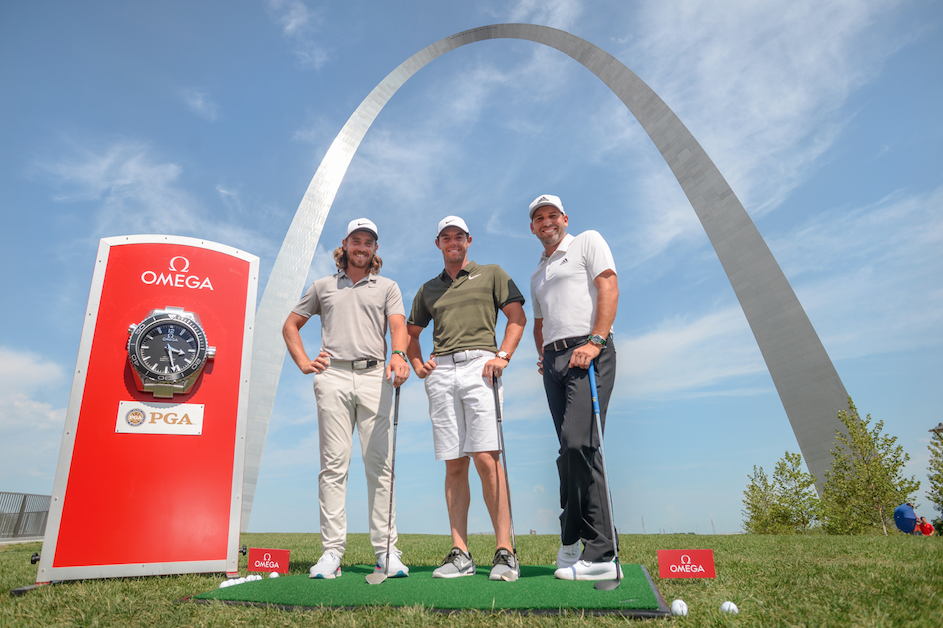 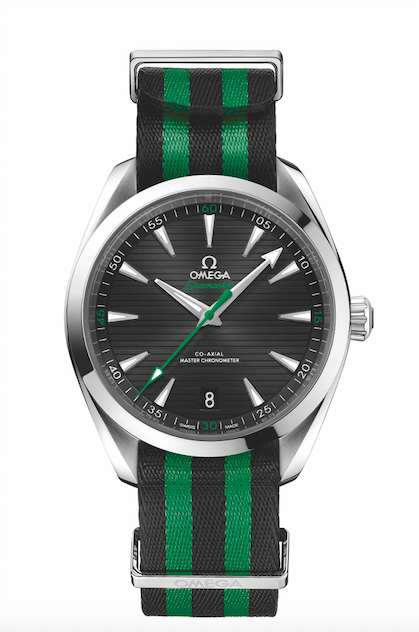 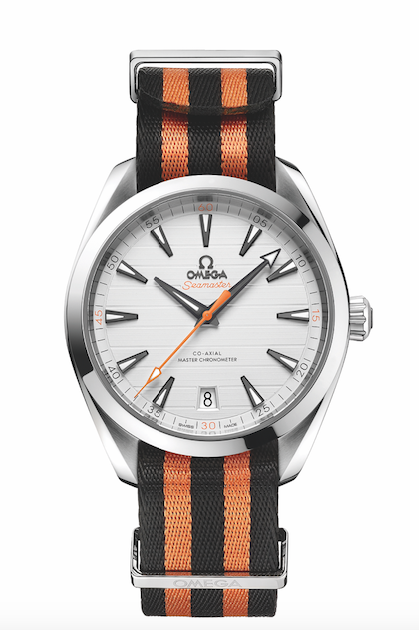 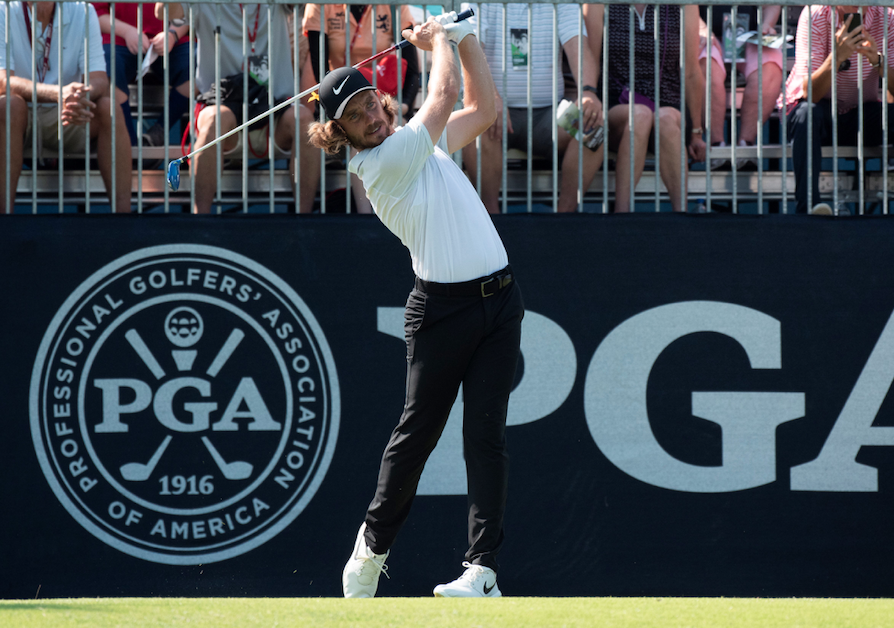 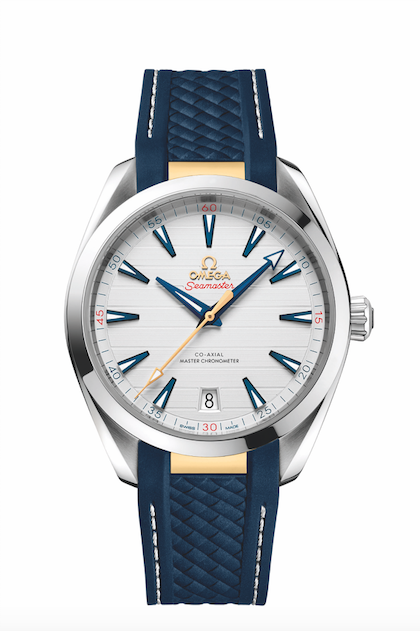 Its name signifies greatness. Omega. The prestigious Swiss brand offers far more than a watch to sport on your wrist. Omega is a lifestyle. An experience. A timepiece that connects families for generations.

The emotional attachment that clients have with their Omega watches is intense, according to Omega President and CEO Raynald Aeschlimann. “Having a nice watch on your wrist is real life. It makes you feel good and reminds you about a time, a place, a feeling. Sometimes it’s about the history of the watch, too. Maybe it was your father’s, and now it’s yours, so it evokes a powerful memory.”

Committed to building long-term relationships with its loyalists, Omega creates some of the world’s most luxurious timepieces, all made with excellent craftsmanship, innovation and precision. Recently, I spoke with Aeschlimann in the VIP Chalet overlooking the 10th-hole fairway at Bellerive Country Club in St. Louis, Missouri, where Omega was hosting the 100th PGA Championship.

I had met Aeschlimann a couple months earlier, at an exclusive “House of Friends” dinner at Tao Hollywood, hosted by Casamigos tequila partners George Clooney, Rande Gerber and Mike Meldman. “Being at that party was incredible,” recalled Aeschlimann. “It was a small get together and I was so proud to have the Omega brand be part of that evening. For me, it shows that there is so much more to these relationships than commerce. I looked around that room and thought, Wow, these people are so much more than just big stars. They are successful because they have strong values. It wasn’t superficial like you might think about Hollywood. I met a lot of people, friends of theirs, that are all probably very successful, and really good people.”

Beyond the fact that mega-stars wear its watches, the brand prides itself on connecting people all over the world who share the same values, and by understanding them, on a personal level. “I truly believe that personal interaction is key to everything we do, because real life is about emotion and connection,” Aeschlimann continued.

In the world according to Omega, golf also evokes emotion and connection. “I think that the sport is universal. It speaks to a lot of people and inspires them,” noted Aeschlimann. “Thirty years ago, when we started to align with golf, it was because it was a sport where we could link our values. It’s about emotion, and being close to people during the moment when they are emotionally connected to golf—watching it on television, or live here at the tournament, or especially if they are competing.”

In reference to Omega’s alliances with golf greats Rory McIlroy, Sergio Garcia, Michelle Wie and Tommy Fleetwood (the newest ambassador in the group), he added, “It’s sometimes hard to explain to people that Omega has much more than just a commercial aspect. These greats have a genuine passion for the brand.”

Demonstrating its commitment to the growth of golf, both domestically and globally, Omega has partnered with the PGA of America since 2011, and is the Official Patron and Official Timekeeper of its many illustrious tournaments. Similarly, across the Atlantic, Omega serves as the title sponsor of Europe’s oldest golf competition in Switzerland, as well as two in Dubai.

The game of golf has even inspired Omega timepieces, including this year’s Seamaster Aqua Terra “Golf.” The new, eye-catching stainless steel 41 mm watches feature a horizontal teak pattern dial, as well as a strong NATO strap designed to stay securely on the wrist even when teeing off. Two styles are available—one with a sun-brushed black dial matched with green and a black-striped NATO strap (worn by Sergio Garcia); the other, a silvery dial matched with a black and orange-striped NATO strap (worn by Rory McIlroy). Powered by the Omega Master Chronometer calibre 8900, both are METAS certified.

Omega’s passion for athletics extends to swimming and sailing, too. It has served as the Official Timekeeper for the Olympics on 28 occasions since the 1932 Summer Olympics in Los Angeles, and will continue that role until at least 2032. “There hasn’t been a single Olympics or PGA tour where we haven’t invited select people to share in these special moments. There are some incredible things that happen, and that same emotion will be felt along with the memory later on, and we want Omega to be connected to that feeling,” Aeschlimann told me. “I will never forget when the American team won the Ryder Cup. We are patrons of the American team…. We had Michael Phelps come, and he talked to them. They won after many years. I will never forget celebrating with the people that we had invited. But also sometimes when we lost. You see, either way, it’s an experience, an emotion.” To commemorate the 43rd Ryder Cup, which took place in Paris in September 2018, the brand released its Seamaster Aqua Terra “Ryder Cup” timepiece during the PGA Championship.

Especially meaningful to the brand was its role as Official Timekeeper in Rio when golf returned to the Olympic Games after an absence of more than 100 years. “I love the Olympic Games, when athletes become the heroes of their countries. Being the official timekeeper is such a huge legacy for Omega, it’s part of our DNA and part of our legacy in the sport. The Olympics is one of these moments where we celebrate sports, celebrate athletes, and celebrate the nations all over the world. It’s an incredibly positive connection.”

The 2020 Olympics in Tokyo will mark the 29th year that Omega will be the official timekeeper. “To be the witness of that incredible moment when athletes suddenly go from being an unknown to becoming the nation’s heroes, that moment when people are inspired and full of pride for who they are and where they come from… I think that brings a lot to the brand… This is the best kind of marketing you can get over the long term. People might buy a watch 5, 10, 20 years later, but this is also part of our destiny. We’re working for the long term.”

In conjunction with the games, Omega is introducing a unique set of five limited-edition watches, available only in Tokyo. “We want to celebrate the hospitality of the Japanese with these five watches. And now everybody in the world wants to have them, but we keep them exclusive there, because we consider them to be linked with Japan—the colors, the history and the design that was created together.” There’s already a waiting list on at least one of the models.

Outside of the sporting arena, Omega continues to have long-term relationships with noteworthy people and events, as well. It has been the watch of choice for James Bond since 1995, and its family of Hollywood ambassadors has long included A-listers, such as George Clooney, Nicole Kidman, Daniel Craig, Eddie Redmayne and, most recently, the entire Crawford-Gerber family (Cindy, Rande, Presley and Kaia). In fact, Cindy holds the title of Omega’s first brand ambassador, beginning in 1995. And as recently seen in First Man, which follows Neil Armstrong (played by Ryan Gosling) and his Omega on his historic journey to the moon, the Omega Speedmaster has been worn by astronauts on each of NASA’s manned missions since 1965, including all six moon landings.

This focus on brand loyalty has helped Omega pave the way for the next generation of customers. “It’s not only that their father, their grandfather and their uncle have the same watch, but it shows them the value and legacy of the brand. … I think that our success today is partly based on getting close to people and explaining who we are, and sharing our values. Also, investing in technology that sometimes doesn’t make the watch very different, but brings a lot of value to the craftsmanship and precision,” he said.

“There’s magic in Omega because it’s a brand that loves to have new ideas implemented. The technology component has always been a strong part of our history. Once you have that established, it’s easy to keep it for the future. Our spirit, our people, our products, they have this inside. I want my brand to be successful by standing out and connecting luxury, emotion and commitment all at once. For people to say, ‘Wow. This is a new way of getting me. I like it.’”

I could have chatted with the captivating Aeschlimann for hours, but time did not permit. I have to admit, it’s perfectly understandable why Omega customers are loyal in the extreme. Olympic champion swimmer Michael Phelps, another Omega ambassador and avid golf fan, showed up to the VIP Chalet and, later, to dinner at Vicia restaurant, where he socialized with brand execs and invited guests like me. Hank Haney, another friend of the brand and legendary golf coach who formerly worked with Tiger Woods, hosted a golf clinic at the nearby Norwood Golf and Country Club. They are all part of the family. And family is all about spending time together and building a powerful connection.

Later in the weekend, Brooks Koepka beat Tiger Woods by two strokes to win the 2018 PGA Championship. And thanks to Omega, a great time was had by all.

In the Hands of Style

Men of the hour take fashion to heart.

The Art of Wearable Art