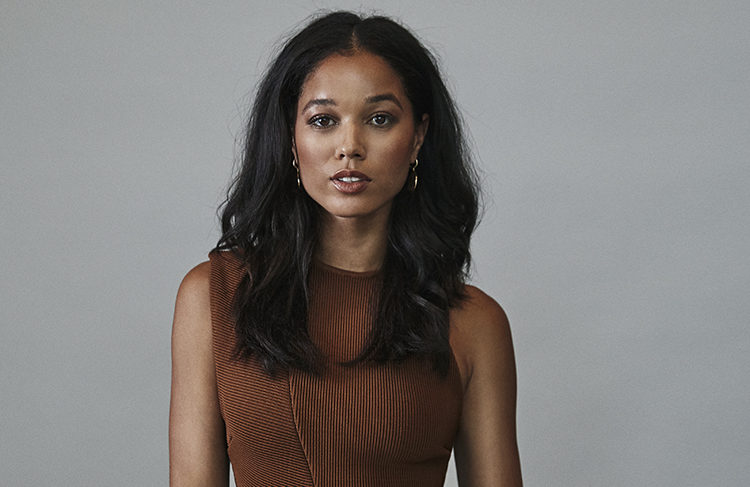 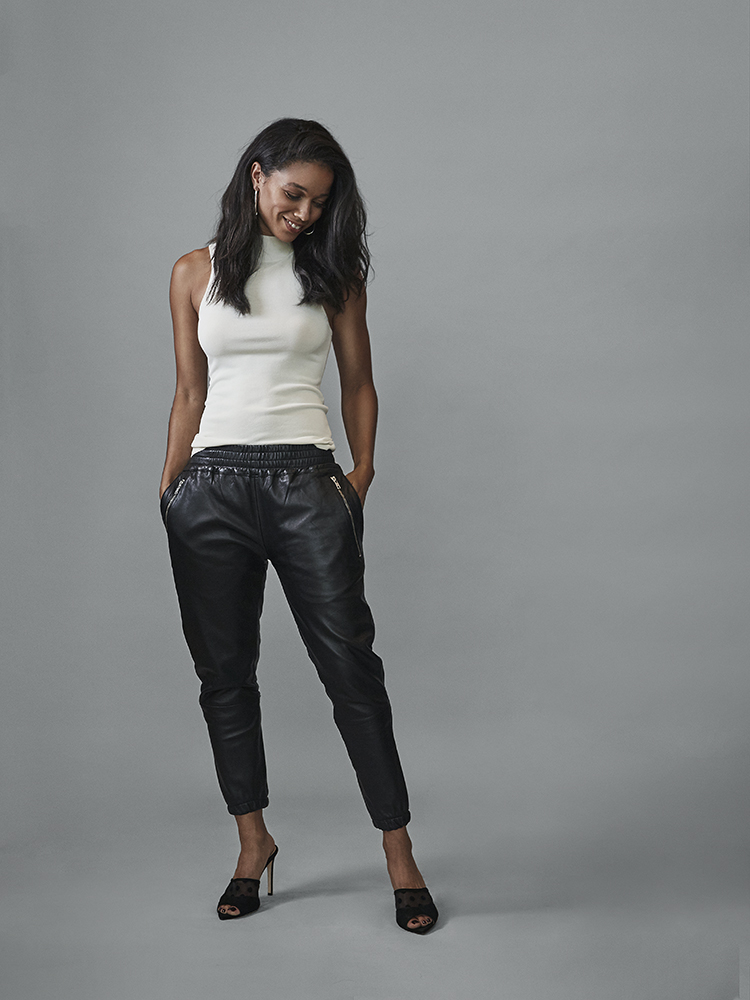 Hollywood might have lost actress Alisha Wainwright to a career in medicine, but fate stepped in when the college science major happened to take a theater class. “I think it was called Acting for Non-Majors,” says the 30-year-old Florida native. “I don’t remember being particularly impressive, but I do remember enjoying that kind of artistic expression.” Following her graduation with honors from the University of Florida, Wainwright scrapped her plans to become a dermatologist (“I didn’t really have the stomach for medicine,” she recalls) and headed west to Los Angeles. She’s been steadily building her resume, appearing on television shows, including Fox’s Lethal Weapon, ABC’s General Hospital and, most recently, the final two seasons of Freeform’s Shadowhunters (based on The Mortal Instruments, a series of young adult fantasy novels by Cassandra Clare), in which she played a headstrong werewolf. Now audiences can catch her opposite Michael B. Jordan in Netflix’s sci-fi series Raising Dion; Wainwright plays Nicole Reese, a single mother who discovers her young son has superpowers. All in all, it seems the actress does not regret the decision to trade in scrubs for scripts. “I think acting was always in the back of my mind,” she says. “I just took the long route to get there.”

What was it like to move cross-country to chase your dream?

The first six months were incredible. I met so many new people and really thought I’d have it easy because a few good opportunities came my way. But the initial good luck didn’t last long, and I found myself struggling to have meaningful friendships and find work. It took a long time for me to find my people.

How did you land the role on Shadowhunters?

Being cast in Shadowhunters was so exciting. I went to a casting call for the role and hearing that I was what they were looking for was amazing. I was aware of the devout fanbase, but it’s surreal once you become a part of it. One of my favorite aspects of Shadowhunters was the stunt team. They loved to teach us, and we were very eager students. I picked up boxing and muay thai while working on the show and I still keep up with it, although I might be a little technically rusty.

What attracted you to Raising Dion?

I had just wrapped Shadowhunters and my team sent me the pilot of Raising Dion and I taped for it. I really gravitated towards the material because I was raised by a single mother, and I already know the challenges of raising a child on your own. Also, of course I wanted to be a part of a show where the star was a supernatural little black boy. [My character] Nicole is a big dreamer who faces reality as a widowed mother of a special young boy. Nicole navigates the trials of parenthood alone once her husband, Mark, passes. She struggles to balance everything once Dion begins to develop superhuman abilities, creating a hectic day-to-day in which she strives to protect him.

What is it like to work with Michael B. Jordan?

Michael is great as a producer and actor.

Do you remember the first time you were ever recognized in public?

I don’t, but I’m sure I made it super awkward.

Where do you hope your career takes you next?

I would love to get back into stunts work, so I’m hoping my next job will require some action.

Is there another actress whose career you’d like to emulate?

I love the direction Jessica Alba’s career took. After a very successful acting career, she started a company worth $1 billion. How incredible!

If you could go back in time, is there anything you would do differently?

I think all the steps taken in life bring you to where you need to be, so as much as I’d love to redo a mistake, I would probably just make it again because the lesson needs to be learned.

What’s the most memorable trip you’ve ever taken?

Oh, there are so many trips that have a special place in my heart. I guess I would say the six months I spent in Australia. I traveled along the East Coast and then spent three months in Melbourne. I learned so much about indigenous culture, as well as Asian culture, and the country is beautiful. A highlight was when I worked on a live-aboard boat, so I could scuba dive in the Great Barrier Reef for a few weeks. Australia is really a melting pot and an easy country to navigate if you’re looking for a long-term trip.

What do you like to do in your free time?

I’m perfecting a few of my baking recipes at the moment. Next thing I want to tackle is croissants.