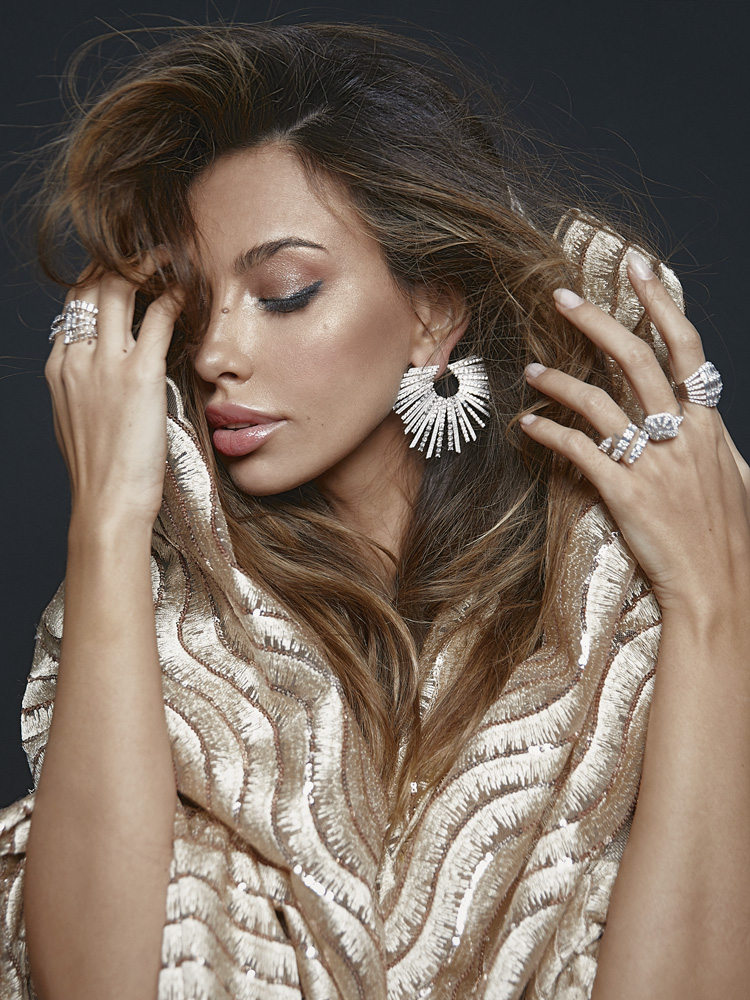 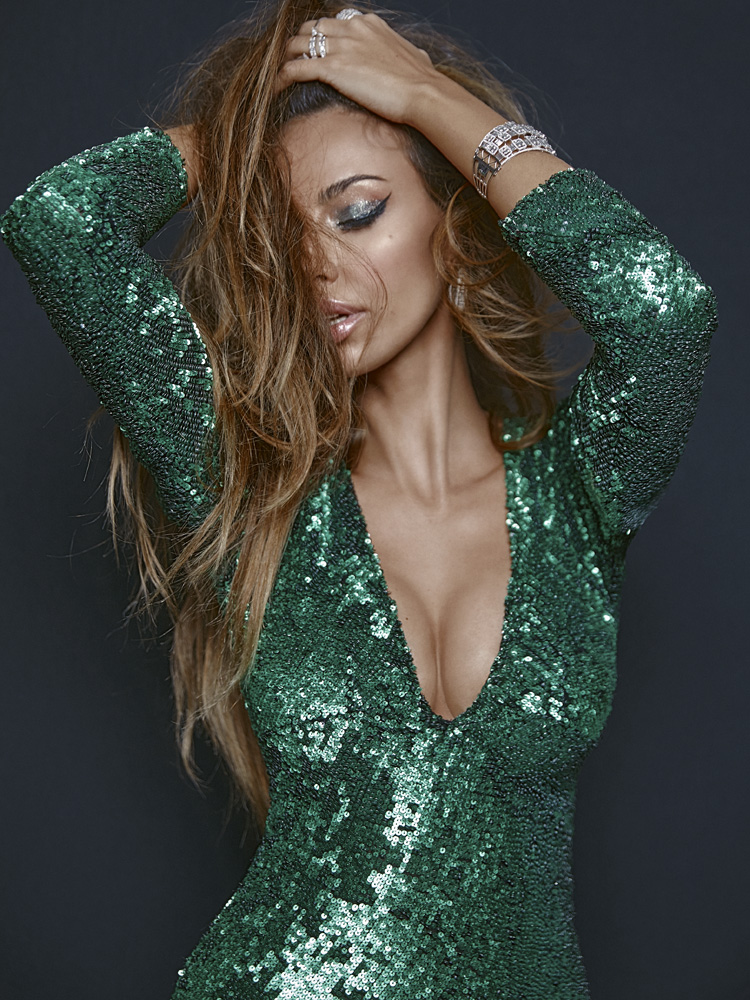 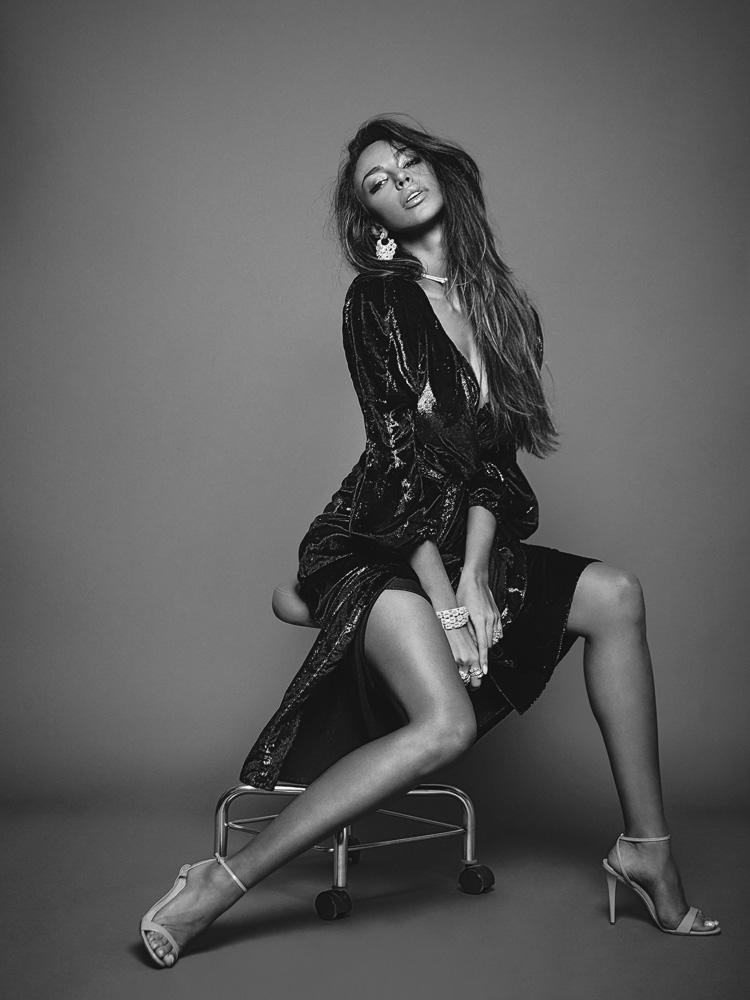 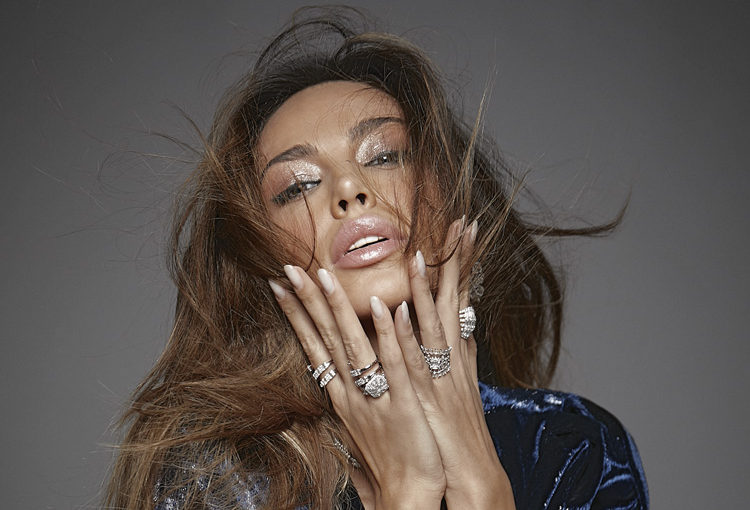 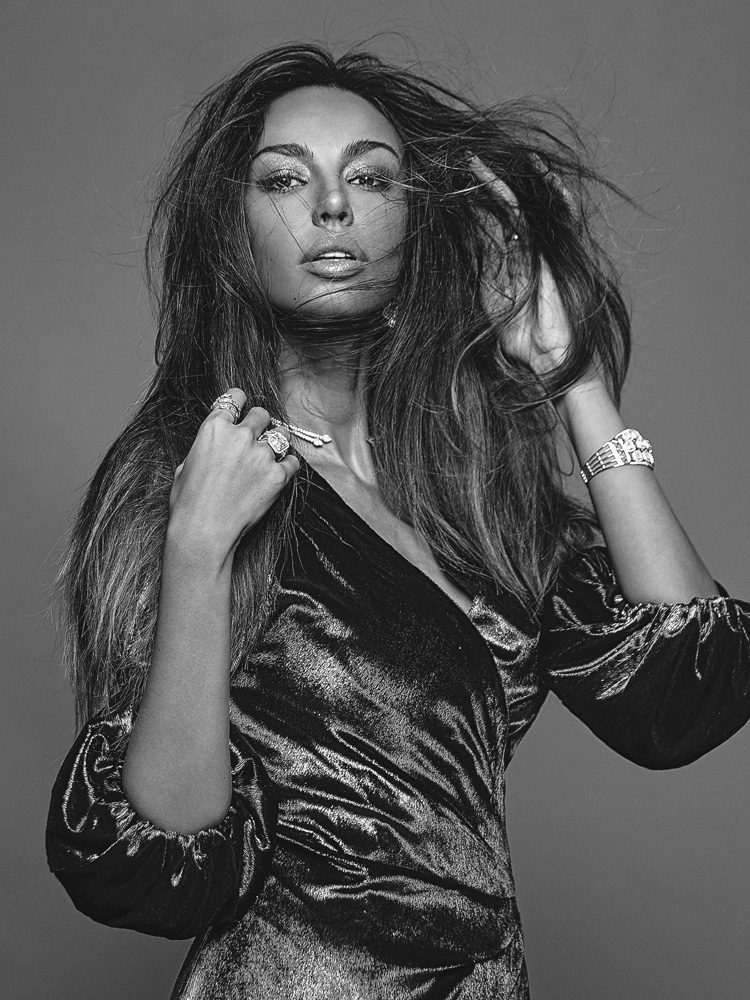 All dresses by { Maria Lucia Hohan

All jewelry by { Djula

Anyone who has ever seen Mădălina Diana Ghenea on screen—perhaps locking lips with Jude Law in Dom Hemingway, playing Miss Universe in Youth or wearing (and removing) Renaissance finery in the Showtime series Borgia—knows that it’s impossible to take your eyes off her. Born in Slatina, Romania, she began her modeling career as a teenager in Italy. Now 32, she is still the darling of photographers and fashion designers, and more stunning to behold than ever. For proof, be on the lookout for her star turn in the upcoming release All You Ever Wished For, in which she appears as the raven-haired object of Darren Criss’ affection. But even more impressive than Ghenea’s ravishing exterior is her inner beauty. The mother of 2-year-old Charlotte is a passionate advocate for Artists for Peace and Justice, a nonprofit organization on a mission to alleviate poverty, and promote peace and social justice in Haiti and other communities in need around the world.

What prompted you to transition from modeling to acting?

I became a brand ambassador for a mobile phone company in 2010, along with one of the best Italian actors, Raoul Bova, and an adored comedian, Teresa Mannino. We were lucky to do these well written and funny commercials, and we became a very successful trio. The company was the main sponsor of a film festival, and as a brand ambassador, I had to give an award onstage. That evening, the daughter of a movie producer approached me and asked me to audition for her father’s next movie, a comedy. This is how I got my first part [in I Soliti Idioti: Il Film] and it was a huge box office hit when it was released in the cinemas. I watched it many times to see the reaction of the public and was thrilled to see I can make people laugh. My dream was to become an actress, but it seemed impossible and having such a good start was incredible. After the comedy, I did a drama and won an award at the Rome Film Festival. For a girl that was selling tomatoes at a local market in Slatina, in the south of Romania, taking her family to see her on the big screen seemed something from another world.

What was it like starring opposite Jude Law in Dom Hemingway?

What can I say about Jude? Starring opposite him in my first English-speaking movie was a pretty amazing start. After working on Dom Hemingway, we both had our dream come true, to work with [director] Paolo Sorrentino. I remember we were at the premiere of our movie in New York and I told him I was auditioning for Sorrentino. He told me that his dream was to work with him, too. I ended up getting the part in Youth, told Paolo about Jude’s wish, and Jude ended up doing my favorite TV show ever, The Young Pope.

You’ve been compared to iconic beauties, including Angelina Jolie and Sophia Loren. Who do you think are some of the world’s most beautiful women, past or present?

You named two. I find them complete artists and amazing human beings. Very rare these days. It’s a fast-consuming industry. Social media is changing everything. You had to get really lucky to see a diva like Sophia Loren in her normal life. Different times now. I feel it ruins the mystery because everything is explained and out there. But there is also a good side… I hope

You were born in Romania, but you’ve modeled, lived and traveled around the globe. Where do you consider home?

Many places I fell in love with. But home is definitely not a place, but a feeling. Wherever I left a little piece of my heart, like Haiti, where I worked for many years as a volunteer.

How has being a new mother changed your life and career?

Before her, I tried to adopt a little girl from a hospital in Port au Prince, which was a painful, long process. Charlotte is my biggest achievement! I decided to have her in a very good moment of my career. Work is important for me, but having a child was my biggest wish, and I wanted to have one before 30. All the emotions that an experience like this can bring give me the capability of understanding characters in a different way, so I consider this a gift for my acting career.

What is the mission of Artists for Peace and Justice, and how did you become involved?

Artists for Peace and Justice’s immediate efforts serve the poorest communities in Haiti with programs in education and training in creative industries. [The organization is] expanding its reach globally, partnering with effective local organizations to give young women access to quality education. “It’s a long beautiful story, a journey in heaven from hell,” is what I wrote in my diary almost 10 years ago, when I first went there. As I said, Haiti became home. I didn’t know what to expect when I went there first and didn’t really know what I was doing, if I was really helping. So many lessons learned there, so many incredible memories.

What are some of your most life-changing memories of Haiti?

I was in front of an emergency room at the St. Luc Family Hospital in Port-au-Prince. The father of this 6-month-old was crying right in front of me. I asked if I could help somehow. His child needed an urgent surgery, he didn’t have the money to pay for it. With the price of a fancy bag, I saved a life. It blew my mind. Everything changed for me. There is this room where they take care of all these abandoned angels with severe medical conditions. One of them, 9 years old, suffered from self-mutilation because of the suffering and lack of love in his life. The child ended up removing his own eyes. That’s how he was found on the streets of Cité Soleil by the doctors of the St. Luc Hospital. I received so much love and affection from that blind kid. He just needed to be held and cared for. I [also] had the honor to be a teacher to their students. One day I asked about their favorite movie stars, and I was surprised to hear they didn’t really have any. It was a reminder that when you live in poverty, movie night is a rare luxury. I asked who are their heroes. One student held up his notebook with Cristiano Ronaldo on the cover. At that time, I was working with Cristiano on a perfume campaign, so I asked him to talk to the kids. The next day, he committed to a big campaign with Omaze [an online fundraising platform].

What upcoming projects are you excited about?

All You Ever Wished For, directed by Academy Award-winner Barry Morrow, with Darren Criss, soon in theaters in the U.S. I will be Maggie in Cat on a Hot Tin Roof in the theater. Always loved that character. My first Romanian movie is coming out this year. It’s exciting to present a movie back home.

What is one thing you must see or do when visiting Romania?

Moldavia. You have to go see the monasteries. There is one where I always go to find answers and peace.

What about in Italy?

Rome’s Castel Sant’Angelo. I danced with my best friends up there once and will never forget that moment.

The show Sleep No More. I’m obsessed. I become a theater animal in New York.

Tokyo by bike at night

I adore Wien, lived there for almost one year. A walk in Schönbrunn Palace. And their radio is actually amazing. The classical music and the language can put me easily to sleep. My best relaxation trick.